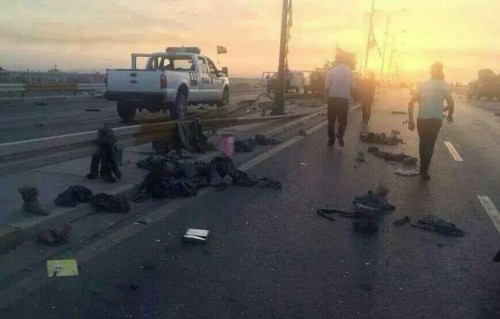 PHOTO: Uniforms left behind by Iraqi soldiers as they fled Mosul

UPDATE 2020 GMT: The US State Department has issued a statement on the events in Mosul:

Senior U.S. officials in both Washington and Baghdad are tracking events closely in coordination with the Government of Iraq, as well as Iraqi leaders from across the political spectrum including the Kurdistan Regional Government (KRG), and support a strong, coordinated response to push back against this aggression. We also commend efforts by the KRG to respond to the ongoing humanitarian crisis. The United States will provide all appropriate assistance to the Government of Iraq under the Strategic Framework Agreement to help ensure that these efforts succeed.

We will continue to work closely with Iraqi political and security leaders on a holistic approach to diminish ISIL’s capacity and ability to operate within Iraq’s borders. Our assistance enables Iraq to combat ISIL on the front lines, where hundreds of Iraqi security force personnel have been killed and injured in that fight this year.

UPDATE 1200 GMT: Iraqi authorities have declared a state of emergency in Mosul, as Prime Minister Nuri al-Maliki vowed to provide weapons and equipment to citizens willing to fight insurgents.

“The city of Mosul is outside the control of the state and at the mercy of the militants,” an Interior Ministry official said.

State TV reported that Parliament received a joint request from Maliki and the President’s office for the state of emergency.

In a televised statement, the Prime Minister said the Cabinet has “created a special crisis cell to follow up on the process of volunteering and equipping and arming”.

He continued the appeal, “(The Cabinet) praises the willingness of the citizens and the sons of the tribes to volunteer and carry weapons…to defend the homeland and defeat terrorism,” he said.

Maliki said the Cabinet decided to “restructure and reorganize” the security forces.

UPDATE 1200 GMT: Speaker of Parliament Osama Nujaifi has told a televised press conference that insurgents now control all key facilities in Mosul, including the airport and prisons.

Nujaifi said the resistance of Iraqi forces had crumbled, “When the battle got tough in the city of Mosul, the troops dropped their weapons and abandoned their posts, making it an easy prey for the terrorists.”

He continued, as he appealed for help from Baghdad and the international community, “Everything is fallen. It’s a crisis. Having these terrorist groups control a city in the heart of Iraq threatens not only Iraq but the entire region.”

Insurgents have taken over the western part of Mosul, Iraq’s second-largest city, and are threatening further advance as they release hundreds of prisoners.

The opposition forces, including the Islamic State of Iraq, overran the headquarters of the provincial Government late Monday.

The Governor, Atheel Nujaifi, was trapped inside the building but escaped as police held back hundreds of attackers armed with rocket-propelled grenades, sniper rifles, and vehicle-mounted heavy machine guns.

Insurgents have moved south this morning, reportedly freeing hundreds of detainees from a high-security prison. They are advancing towards the Ghizlani military base.

Claimed video of fighting in the al-Tanak area:

A tour of the city, as residents try to leave:

Governor Nujaifi had appealed on TV to the city’s inhabitants: “I call on the men of Mosul to stand firm in their areas and defend them against the outsiders, and to form popular committees through the provincial council.”

However, army officers said Iraqi forces were demoralized and outmatched by the attackers.

“Without urgent intervention of more supporting troops, Mosul could fall into their hands in a matter of days,” said a “senior security official” from Nineveh operation center, adding that ISIL was only 3 kilometers from the Ghizlani military camp.

“The whole of Mosul collapsed today. We’ve fled our homes and neighborhoods, and we’re looking for God’s mercy,” said dentist Mahmoud Al Taie. “We are waiting to die.”

Turkey’s Consulate in Mosul confirmed media reports that 28 Turkish truck drivers, carrying diesel from the Mediterranean port of Iskenderun to Mosul, have been abducted by the Islamic State of Iraq.

The insurgent offensive is the latest sign of their growing challenge to the al-Maliki Government. At the start of this year, the Islamic State of Iraq and tribal factions took parts of Anbar Province in western Iraq, seizing control of the city of Ramadi and threatening Fallujah.