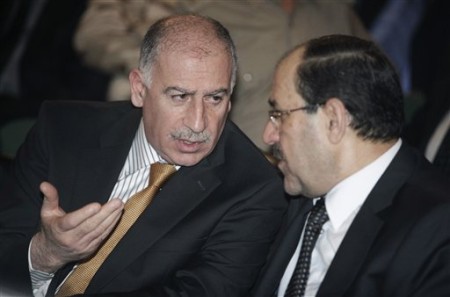 See Iraq Analysis: Why US-Iran Cooperation Is a Long Shot — A 5-Point Guide

Al-Maliki said again that Saudi Arabia is behind the “regional plot” of the insurgency, which he pledged to battle with new volunteers:

What happened in Mosul was a shock for us. It is part of a conspiracy. The attack was painful but now we are trying to stop the deterioration. The Iraqi people are being mobilised to take up arms against these gangs.

A hopeful sounding Maliki: "What has happened in Iraq is a setback but not every setback is a defeat." #cbc

Saudi Arabia does not provide either moral or financial support to ISIS or any terrorist networks. Any suggestion to the contrary, is a malicious falsehood….

We oppose all foreign intervention and interference in the internal affairs of Iraq. Instead, we urge all the people of Iraq, whatever their religious denominations, to unite to overcome the current threats and challenges facing the country.

A week after the fall of Mosul, Iraq’s second city, Sunni and Shia political leaders finally issued a call for unity in the face of the advancing insurgency.

After a closed-door meeting, al-Jaafari issued the statement for “defending the state and protecting its sovereignty and dignity”, while “reviewing the previous course”: “No terrorist powers represent any sect or religion.”

Al-Nujaifi had been critical of the Government’s handling of the crisis, as his brother, the Governor of Mosul’s Nineveh Province, blamed al-Maliki for the collapse before the insurgents. Al-Jafari has been mentioned in a nervous Baghdad as a possible successor to the Prime Minister.

Al-Maliki himself had shown little sign of working for unity, despite pressure from the US. Earlier on Tuesday, he had put out a defiant proclamation promising to punish “traitors” in the police and military and blaming Saudi Arabia for the uprising.

Insurgents put more pressure on the Government early Tuesday with an attack on Baquba, less than 40 miles from Baghdad. The attackers briefly occupied part of the city center before they were pushed back. Scores were killed in the fighting, including at least 44 prisoners at a police station attacked by the insurgency — the insurgents said they were shot dead by Shia militia, while the Iraqi military said the deaths came from shelling by opposition forces.

Official: US Carrying Out Round-the-Clock Surveillance

Government: 59 Military Officers to Be Tried for Abandoning Mosul

An Iraqi military spokesman has read out the names of 59 officers to be tried for “abandoning” Mosul to insurgents.

On Tuesday, Prime Minister al-Maliki fired four commanders and said one would be tried for the defeat, and he said in a statement this morning that more officers will be punished.

Long lines for gasoline are reported throughout northern Iraq amid the insurgent takeover of the Baiji oil refinery, the Kurdish move into Kirkuk, and alleged Government restrictions on supplies.

A taxi driver in Erbil in Iraqi Kurdistan says people are talking of gasoline being smuggled into Mosul and other areas with shortages.

He says he lined up for four hours to fill his taxi.

A government employee in Baiji has confirmed that insurgents control almost of the oil refinery, contradicting the claims of the Iraqi military (see below) that they repelled Wednesday’s attack.

Salah Majed said that, after a 7-hour fight this morning, security forces withdrew to the northern gate and waited for reinforcements from Baghdad.

An employee in the refinery said that the security forces at the gate were not allowing staff to leave the complex.

The Baiji refinery is one of three in Iraq and handles all the oil from the north of the country.

Foreign Minister Hoshyar Zebari has told reporters in Saudi Arabia, “Iraq has officially asked Washington to help under (our) security agreement, and to conduct air strikes against terrorist groups.”

The Chairman of the US Joint Chiefs of Staff, General Martin Dempsey, confirmed Zebari’s news in a Senate hearing, “We have a request from the Iraqi government for air power.”

Jaffer said ENI, Schlumberger, Weatherford, and Baker Hughes had no plans for evacuations.

“This message is not satisfactory for us. We are not convinced the work should not be done remotely. They should be here on the ground,” Jaffar said. “I assure the companies that the current developments in the country have not affected and will not affect in anyway the operations in the south.”

Jaffar maintained that the exports in June will be 2.7 million barrels per day, which would top May’s record figure of 2.6 million bpd.

Iraqi Kurdistan has built a link connecting Kirkuk to its newly-built pipeline to Turkey.

Kurdish forces secured Kirkuk last week after the withdrawal of Iraqi forces in the face of an insurgent offensive.

The link could allow the Kurds to start exports of Kirkuk crude oil through their own network, by-passing the Iraqi Government.

The Iraqi Government has forbidden Kurdistan to strike its own export deals with Turkey, amid a dispute between the Kurds and Baghdad over the share of oil revenues.

The Kurdish initiative is still jeopardized by security consideration: the main 600,000 barrel-per-day Kirkuk pipeline has been offline since March following insurgent attacks.

The insurgents have targeted engineers trying to fix sections of the line that pass through territory outside the control of the Kurdistan Regional Government.

Iran’s President Rouhani has said Tehran will defend Shia shrines in Iraq against “killers and terrorists”.

In a televised speech from western Iran, Rouhani said many Iranians had signed up to defend the sites:
“Regarding the holy Shia shines in Karbala, Najaf, Khadhimiya and Samarra, we announce to the killers and terrorists that the big Iranian nation will not hesitate to protect holy shrines.”

He declared, “These terrorist groups, and those that fund them, both in the region and in the international arena, are nothing, and hopefully they will be put in their own place.”

The President has denied that any Iranian troops are in Iraq, amid reports that up to 2,000 soldiers — including elements of the elite Qods Force — and Basij militia have entered the country.

Insurgents have moved into the Baiji refinery, one of three in Iraq, after attacks with mortars and machine guns.

An official inside the complex said, ﻿”The militants have managed to break in to the refinery. Now they are in control of the production units, administration building and four watch towers. This is 75% of the refinery,” an official speaking from inside the refinery said.

He said clashes were continuing near the main control room.

However, Iraq’s chief military spokesman, Lt. Gen. Qassim al-Moussawi, claimed the attack had been repelled, saying 40 attackers had been killed.

Another military spokesman, Gen. Qassim Atta, said on TV, “Baiji is now under control of our security forces, completely.”

The refinery was closed on Monday night and foreign staff evacuated.

Insurgents took the center of Baiji as they marched from Mosul towards Baghdad last week.

About 60 foreign workers, including 15 Turkish citizens, were kidnapped by the Islamic State of Iraq and as-Sham on Tuesday.

The workers were seized near Kirkuk. They were travelling from the town of Dor near Tikrit, where they were building a hospital, to the Kurdish city of Sulaimaniya in northern Iraq.

Almost 100 Turkish citizens, including about 50 staff and dependents of the Turkish consulate in Mosul, are being held by ISIS.

The other kidnapped workers are from Pakistan, Bangladesh, Turkmenistan, and Nepal.

Indian officials have confirmed that 40 construction workers have been abducted, and have expressed concern about 46 nurses working in a hospital in Tikrit.

Head of Iran’s Armed Forces: US Responsible for Iraqi Insurgency and “Terrorists”

By any meddling and military intervention in Iraq, the Americans are seeking to attain ungracious goals, at the top of which undermining the elections in Iraq, and the crocodile tears of the Americans should not receive any attention, as they are still the allies of the sponsors and supporters of terrorists in the region.

The general also claimed the Islamic State of Iraq and as-Sham was a creation of Israel: “ISIS is Israel’s cover up for distancing the revolutionary forces from Israeli borders and creating a margin of security for the Zionists, and the Zionist media have also admitted this fact.”