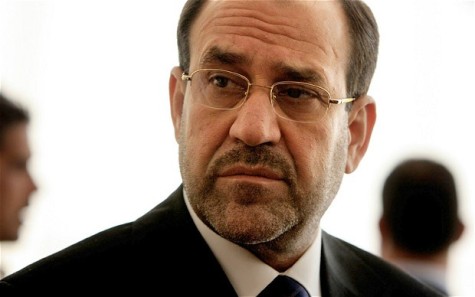 Friday was difficult for Iraq’s Prime Minister al-Maliki on the political front, as pressure mounted for his departure.

The country’s leading Shia cleric, Ayatollah Ali Sistani, called for the “formation of an effective government that is acceptable on a…national level (and) avoids past mistakes”.

Through a representative at Friday Prayers, Sistani warned that, if the insurgency is not “fought and expelled from Iraq, everyone will regret it tomorrow, when regret has no meaning”. Continuing to argue against sectarian conflict, he said “Iraqis of all religions and communities had to band together”.

From the outside, the US continued its maneuvers to force al-Maliki into significant reforms or to step down. High-level discussions were confirmed with leading Iraqi politicians such as Sunni Speaker of Parliament Osama al-Nujaifi and former Deputy Prime Minister Nuri al-Maliki, a Shia whom the US tried to install as President in 2003.

Al-Maliki’s day was better on the military front, where Iraqi forces held critical lines after 10 days of retreat before an insurgent offensive.

Iraqi troops and militias are maintaining positions in Samarra, 70 miles north of Baghdad, and Baquba, 40 miles to the northeast. They are continuing to fight for the Baiji oil refinery between Mosul and Baghdad, part of which was seized by insurgents on Thursday, and for the town of Tal Afar in northwest Iraq near the Syrian border.

However, a US official said Iraqi forces might be buckling in the battle for the refinery, one of three in Iraq: “There is very little the Iraqi government can do to save or liberate those guys.”

Sources have told Lebanon’s Daily Star that 17 insurgents have been killed in in-fighting in Kirkuk Province.

Clashes erupted on Friday evening between the Islamic State of Iraq and Greater Syria and the Army of the Men of the Naqshbandiyah Order in Hawija.

One security official said Naqshbandiyah fighters had refused an ISIS demand to give up their weapons and pledge allegiance to the jihadist force.

Other witnesses said the two sides disputed over who would take over fuel tankers in the area.

A police source said nine people were killed on Saturday when explosives were detonated in Shia neighborhoods in Baghdad.

1000s of Sadrists March in Baghdad

Thousands of Shia militia loyal to the cleric Moqtada al-Sadr have paraded through the streets of Baghdad.

Sadr, whose Mahdi Army challenged the US occupation of Iraq for years — and who was targeted for assassination by the American — had called for the military display.