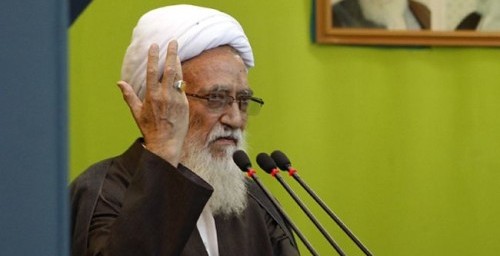 LATEST: Supreme Leader’s Representative: “US is Not Safe From Our Missiles”

The Tehran Friday Prayer has repeated the warning to President Rouhani over his approach to Iran’s politics and culture.

Ayatollah Ali Movahedi Kermani told the crowd, “Officials must be careful for the penetration of seditionists; I particularly warn the science, education and teaching ministries in this regard. This has caused the dissatisfaction of some MPs.”

The sermon was a riposte to Rouhani’s addresses to university professors and students last month, calling for an easing of regime pressure on academics over their political and cultural views.

Many hundreds of students have been disciplined, expelled, or “starred”, limiting their academic results and careers. Professors were fired or forcibly retired as the Ahmadinejad Government took a tougher approach towards the expression of views, especially after the disputed 2009 Presidential election. Officials pursued the “Islamicization” of universities, including the abolition of “Western” humanities from curricula.

Hardliners have put increasing pressure on Rouhani over his campaign promises to release political prisoners and open up Iranian culture and media. They have said such measures would appease foreign-supported “sedition”, their label for the protests after the 2009 Presidential election.

The Endurance Front, the main hardline opposition, renewed the allegations on Friday as they attacked the Rouhani Government’s position on nuclear talks as well as political and cultural issues.

The Chief of Staff to the Endurance Front’s leader, Ayatollah Mesbah Yazdi, announced that “1200 directors, governors, MPs…and a previous Minister of Intelligence had a role in the sedition.”.

Supreme Leader’s Representative: “US is Not Safe From Our Missiles”

The Supreme Leader’s representative to the Revolutionary Guards has put out the latest tough-talk warning to the US.

Mojtaba Zolnour said, “In the case of an irrational measure from America, (US) military bases will not be safe from our missiles, whether in Bahrain or in Diego Garcia in the Indian Ocean.”

The Revolutionary Guards and military have issued a series of declarations that the US will be defeated and Israel destroyed if Washington or its Israeli ally attacks Iran, even as the Islamic Republic pursues nuclear talks with the US and the other 5+1 Powers.

The Supreme Leader’s military advisor, General Yahya Rahim Safavi, assured Friday, “Our country is presently the Number One power in Southwest Asia from the aspects of political and geopolitical weight and security wise, although we still have evil enemies like America and Israel and have internal problems as well.”