Syria Daily, May 1: 25 Children Killed in Attack on Aleppo School 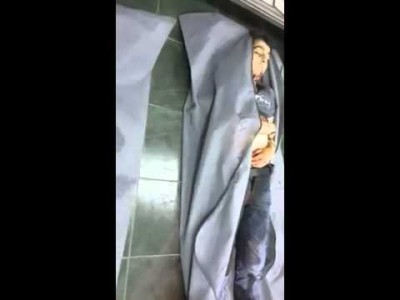 1st-Hand: The Day The General — & My Friend’s Father — Threatened My Family & Me

UPDATE 1045 GMT: The opposition Syrian National Coalition has denied claims that insurgent mortars killed children on Tuesday near Damascus, while highlighting the regime airstrike on Wednesday on an Aleppo school:

Haj: Allegations regarding rebels targeting schools is impossible, Assad is trying, through these false accusations, to cover up his crimes

Haj: The school in Aleppo was bombed by war planes, which only regime forces have in their arsenal.

Haj: The Assad regime’s systematic targeting of schoolchildren aims to destroy the future of Syria and to achieve political goals.

At least 25 children were killed on Wednesday by a regime airstrike on a school in Aleppo, according to the Aleppo Media Center.

Video showed shrouded bodies of 10 of the children laid out on the ground of a local hospital.

Some activists say several adults also died when the warplane struck during an art fair at the Ein Jalot school.

Some of the children’s drawings showed the 39-month conflict and its effects.

The United Nations’ children’s organization UNICEF said in a statement, issued just before the airstrike, that it was “outraged by the latest wave of indiscriminate attacks perpetrated” by both sides “against schools and other civilian targets across Syria”.

UNICEF cited three insurgent attacks on Tuesday in Homs and near Damascus. At least 17 children died in a mortar strikes on two schools near the capital, and others were killed by a car bomb in Homs, according to State media.

The manager of the al-Watan Foundation, which funds schools for displaced Syrians, has spoken of an incident in Sunday when a makeshift school with 400 students was hit by an airstrike.

The attack on the Qah camp, 4 kilometers (2.5 miles) east of the Turkish border, killed one child and injured dozens.

Pro-regime media insisted the raid “targeted a Jabhat al-Nusra hideout in Qah”, but the Foundation’s Hiba a-Showaf said “the area is completely devoid of anything indicating any military features”.

Claims are being made that insurgents have moved into Jaramana, just southeast of Damascus.

BREAKING – Mass panic extending inside #Jaramana suburb, S-E to #Damascus, as rebellion factions entering in tonight for the first time.

IMPORTANT – Three industrial complexs are under rebellion control between #Mleiha and #Jaramana, confirming penetrating the area.

BREAKING – #NDF retreating from some checkpoints in #Jaramana as no prepared to confront rebels. Reports of #Iraq'i militiamen coming.

If true, the reports are a significant psychological and military advance by the opposition. The claims say insurgents have moved from Mleha, where they have been facing weeks of attack by Syrian forces, into an area which is considered a bastion of support for the Assad regime.

Claims are circulating that insurgents have taken Dumayr airport, 38 kilometers (24 miles) northeast of Damascus, after attacking it throughout Thursday:

Other sources say the fight is ongoing:

Many reports are saying that the rebels now control al-Dumair military airport. They are #false. Clashes are still going on.

Dozens of people have reportedly been killed in a regime airstrike on the Hullok section of northeastern Aleppo on Thursday.

Activists said up to 40 people had died and dozens were wounded. They said the warplane struck with a missile, turned around, and fired another one. 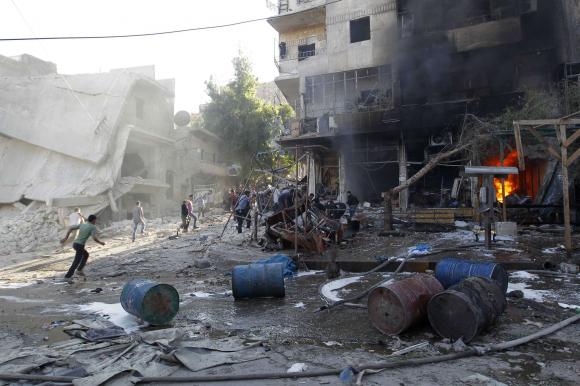 Insurgent footage of the questioning of shabiha — pro-Assad militia — captured in an attack on a checkpoint in Homs:

Opposition fighters have been trying to counter attempts by the Syrian military to reclaim insurgent-held areas of the city.

Claimed footage of insurgents with a US-made TOW anti-tank missile in Latakia Province in western Syria:

Opposition fighters launched an offensive in northern Latakia Province, on the Mediterranean coast, last month. The video shows the TOW’s target as Tower 45, a strategic hilltop which overlooks villages near the Turkish border and which was re-taken by regime troops after it was taken by insurgents at the start of April.

The fighters in the video are from Liwa al-Aadiat, affiliated with the Free Syrian Army and based in Latakia. It has posted the video on its Facebook page.

It is not known if the US supplied the TOWs; however, American officials near Syria said last week that they had endorsed the deliveries. Other officials said that the weapons would only go to “moderate” factions and that they would be controlled with codes and keylocks to ensure they were only used against regime forces.

Despite Food Shortage and Worst Harvest Since 1973, Regime Sells Wheat to Iraq

Despite the worst harvest in more than 40 years and food shortages, Syria’s State cereal agency issued a tender on Wednesday to sell 100,000 tons of soft wheat and 100,000 tons of durum wheat from last season’s crop to Iraq.

A Syrian trader said the regime may be aiming to sell stocks to Iraq that cannot be moved within Syria because of the conflict: “The case could be that they have wheat that is stuck in some areas and they are having difficulty transporting it to other areas within the country so it is easier to sell it to Iraq as it is nearby.”

Agricultural experts and traders say this year’s wheat production could be between 1 million to 1.7 million tons, half the output in 2010 and the lowest level since 1973.