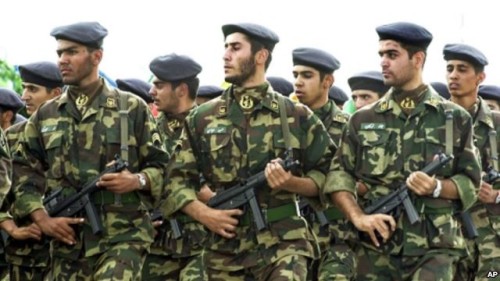 The head of Guards’ Aerospace Force, General Amir Ali Hajizadeh, said, “86 world countries stood and said the Syrian government should be changed and Bashar Assad should go, but they failed because Iran’s view was to the contrary, and they were eventually defeated.”

The Guards have said from September 2012 that they were providing assistance to Damascus, including intelligence, logistics, reconstruction, and the formation of a 50,000-member national militia. Video has shown Iranian officers training militia, and there have been periodic reports of the deaths of Iranian officers and fighters in Syria.

Tehran has stopped short of saying that it is directly involved on the Syrian battlefield.

However, Iran’s ally Hezbollah has been increasingly prominent in the Syrian military’s operations, sending thousands of fighters and playing key roles in victories such as Qusayr in June 2013 and Yabroud last month.

Hajizadeh said on Saturday, “The US Secretary of State (John Kerry) has very explicitly acknowledged that they have failed and the scene has changed as desired by Iran and Hezbollah.”

Former President Hashemi Rafsanjani has used his leadership of the Expediency Council to call for moderation and a halt to political clashes.

Rafsanjani, the mentor of President Hassan Rouhani, told the Council that extremism and harsh remarks should be avoided to help the country move forward.

Hardline attacks on the Rouhani Government, particularly over political and cultural affairs, have escalated this year. Clerics, the military, and MPs have warned the President to back off promises to open up Iran’s media and cultural space, and a campaign against “sedition” has been used to check the release of political prisoners, including detained opposition leaders Mir Hossein Mousavi and Mehdi Karroubi.

Rafsanjani also used the address to back the Government’s nuclear talks with the 5+1 Powers, saying that Iran would defend its “legitimate rights”.

Zolfaqari said 4,000 men would take part in the Eqtedar 3 (Might 3) drills, “The wargames will be staged to enhance the border guards’ power in confronting threats.”

Jaish ul-Adl, which seized the men in southeastern Iran and took them into Pakistan, executed a fifth captive in mid-March. The group has carried out a series of attacks on Iranian forces since last summer, killing 14 guards in one assault in October.

Earlier this month, the Revolutionary Guards took command of a 300-kilometer (180-mile) stretch of the border with Pakistan, and the construction of hundreds of watch towers was announced.

Iranian officials and commanders have repeatedly underlined that all military exercises and trainings of the Iranian Armed Forces are just meant to boost the level of the country’s military preparedness or serve deterrent purposes.