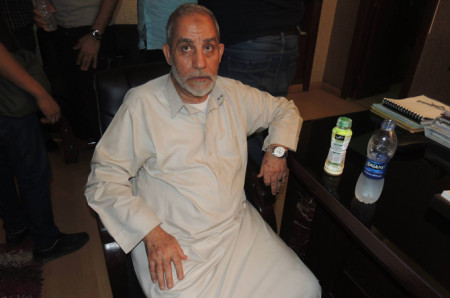 A judge in Egypt has confirmed the death sentences of 37 of 529 defendants, while condemning another 683 to execution.

The defendants, alleged to be members of the Muslim Brotherhood, are accused of complicity in murder during protests last summer against the July 2013 military-backed coup.

Among those sentenced to death on Sunday was the Brotherhood’s Supreme Guide Mohamed Badie.

Those from the first case whose death sentences were not upheld were each sentenced to 25 years in prison.

Of the 683 added for execution, only 77 are in custody; the remainder were tried in absentia.

Many of the lawyers for the accused boycotted the hearing, demanding that Judge Sayed Youssef be recused and calling him a “butcher”.

Mohamed Abdel Waheb, a lawyer who represents 25 of the defendants, said the session lasted less than five minutes.

He said Youssef’s earlier condemnation of the 529 defendants took just four hours, during which the judge refused to listen to any arguments from the defense.