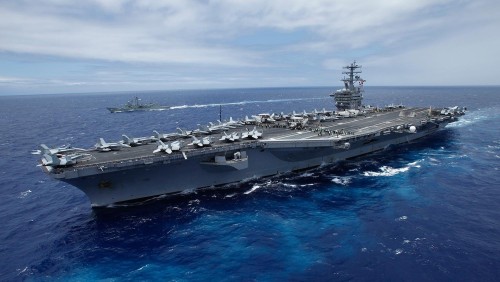 PHOTO: An actual US aircraft carrier

The headline in The New York Times last Thursday promised intrigue and a bit of threat: “Iranian Ship, in Plain View but Shrouded in Mystery, Looks Very Familiar to U.S.”

So did the opening paragraphs of the story, fed to The Times’ Washington correspondent Eric Schmitt by US military and intelligence officials:

Iran is building a nonworking mock-up of an American nuclear-powered aircraft carrier that United States officials say may be intended to be blown up for propaganda value.

Intelligence analysts studying satellite photos of Iranian military installations first noticed the vessel rising from the Gachin shipyard, near Bandar Abbas on the Persian Gulf, last summer. The ship has the same distinctive shape and style of the Navy’s Nimitz-class carriers, as well as the Nimitz’s number 68 neatly painted in white near the bow. Mock aircraft can be seen on the flight deck.

Schmitt reassured readers that this was not a “real” Iranian ship ready to challenge the US Navy — “Intelligence officials do not believe that Iran is capable of building an actual aircraft carrier” — but his military sources played up the drama and Iran’s devious plans:

“Based on our observations, this is not a functioning aircraft carrier; it’s a large barge built to look like an aircraft carrier,” said Cmdr. Jason Salata, a spokesman for the Navy’s Fifth Fleet in Bahrain, across the Persian Gulf from Iran. “We’re not sure what Iran hopes to gain by building this. If it is a big propaganda piece, to what end?”

Whatever the purpose, American officials acknowledged on Thursday that they wanted to reveal the existence of the vessel to get out ahead of the Iranians.

Navy and other American intelligence analysts surmise that the vessel, which Fifth Fleet wags have nicknamed the Target Barge, is something that Iran could tow to sea, anchor and blow up — while filming the whole thing to make a propaganda point, if, say, the talks with the Western powers over Iran’s nuclear program go south.

Well, the Iranian model is part of a drama, albeit not one that is supposedly worrying the Pentagon — and the story isn’t that much of a mystery.

If The New York Times had come to EA, rather than the Pentagon, we could have eased their minds while deflating their headline: the “aircraft carrier” is a movie prop — one that we have known about for almost a year.

In April 2013, Iranian websites announced that a joint Iranian-Canadian production was going to tell the story of Iran Air 655, the civilian jet shot down in July 1988 by the USS Vincennes, killing all 290 passengers and crew.

Co-directed by Nader Talebzadeh and Paxton Winters, the film would include Iranian and American actors, including Val Kilmer and Sean Ali Stone, the son of director Oliver Stone. Some parts of the movie would be shot in the US, according to the Iranian Students News Agency.

Sean Ali Stone had met Talabzadeh when the actor travelled to Iran in September 2011: 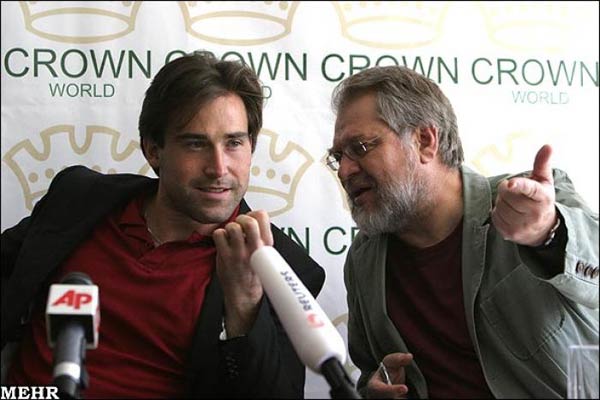 US officials and analysts forgot or were unaware of all this — or were confident that Schmitt would not discover the truth as they put out their scarier tale:

“It is not surprising that Iranian military forces might use a variety of tactics — including military deception tactics — to strategically communicate and possibly demonstrate their resolve in the region,” said an American official who has closely followed the construction of the mock-up….

“The system is often too opaque to understand who hatched this idea, and whether it was endorsed at the highest levels,” said Karim Sadjadpour, an Iran expert at the Carnegie Endowment for International Peace.

Schmitt wrote of his efforts to check the US claims, “Iranian Navy officials could not be immediately reached for comment as the country prepared to celebrate its New Year festivities.”

Schmitt did not say if he had tried to confirm the story with The Times’ Tehran correspondent, Thomas Erdbrink.

Other US media raced to get Washington’s officials and politicians for their own versions of the story. Representative Eliot Engel told USA Today, “We don’t really know what it means, but I for sure don’t trust the Iranians. It’s some kind of a ruse and whatever they are up to, it’s no good.”

CNN announced that it had “commercial satellite images” and brought out its unnamed US official to declare, “While the purpose of the fake carrier is unknown, Iran may be planning to destroy it in a propaganda move.”

Meanwhile, Iranian outlets — some of whom have long been noted for their propaganda and scare stories — reveled in The Times’ conversion of the movie ship into a menace. Mashregh News laughed at the “quandary of America’s security and intelligence officials”. Alef put on a more serious face:

The issue has turned into a good excuse for another wave of hype against Iran. Without any proof or real basis, the western media have jumped again to paint a negative picture of Iran.

The Times and Schmitt — and their Pentagon and intelligence sources — don’t seem bothered, however. They have not stepped back from their original story:

For now, Navy analysts and American intelligence officials say they are not unduly concerned about the mock ship. But the fact (is) that the Iranians are building it, presumably for some mysteriously bellicose purposes.