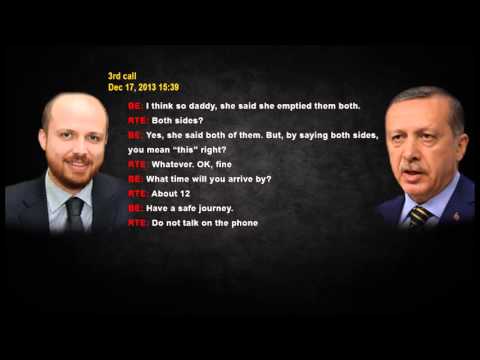 This week, claimed audio recordings are circulating of Prime Minister Recep Tayyip Erdogan telling his son Bilal to move millions in cash, amid a corruption investigation that has implicated the sons of several Cabinet minister.

In a series of conversations dating to the first wave of arrests in December, Erdogan apparently instructs Bilal to hide the money. At the same time, he warns his son not to accept the bribe of a famous businessman if the offer is lower than expected.

The revelations come as Erdogan is speaking of a “war of independence” against the “parallel structure”, even as he hopes for support in local elections on March 30.

The Prime Minister has made his own economic allegations, declaring that soome of his foes are manipulating Turkey’s market so they could make fortunes overnight. however, his main challenge to his rival Fettullah Gulen, the head of the Gulen Movement, is the claim of the “parallel state” and a “robot lobby” that is supposedly behind the “montages” of prosecution of his allies.

Now Erdogan is invoking the “War of Independence” for the elections, asking crowds if they will vote for the “old Turkey” where “corruptions would take place”.

The polarization of rhetoric and politics will continue, because Erdogan knows this is the only chance to blunt the attacks on him, winning the elections and re-building the confidence of the ruling AKP. Then he will have the time and space to return to his agenda, such as the conclusion of talks on the Kurdish issue, and his proclamations that he — far from being corrupt — is the protector of Turkey’s economic growth.

TRANSCRIPT OF CONVERSATION BETWEEN PRIME MINISTER ERDOGAN AND HIS SON BILAL, DECEMBER 17

RTE (Recep Tayyip Erdogan): Are you at home, son?

BE: What can I have on me, Dad? There is your money in the safe.

BE: You are sending who?

RTE: Then… She has that information, OK. Talk with your older brother.

RTE: Let’s do….Talk with your uncle, too. He should also take out….Also talk to your [maternal] uncle, he should also…

BE: What should we do with this [money], Dad? Where should we put it?

(A woman’s voice is heard in the background saying, “Berat.”)

BE: Berat also has some —

RTE: That’s what I am saying. Now, get together, go get your uncle. I don’t know if Uncle Ziya has some? Also immediately [tell] your brother Burak, too.

NE: OK, Dad. You mean, Sümeyye, I mean take out, Sümeyye will tell me where to take it [money]?

RTE: Yes, fine. Come on, do [it], think about yours [your money] with your uncle.

BE: About what to do?

BE: Dad, we got together with Hasan [brother], etc. Berat [brother], my uncle, we are together thinking about it [what to do.] Berat has another idea. He says let’s give some of it to Faruk [Kalyoncu] for the other “business/thing” so he can process it like the previous stuff. Shall we do it? We can dissolve a big amount with this.

RTE: That may be so.

BE: OK. For the other part, because we started a business partnership with Mehmet Gür, we thought of giving it to him, saying, “Keep it, as the projects come, you can use that [cash]. This way, we will be able to dissolve and move the rest somewhere else.

BE: She arrived home, she will now come here. OK, Dad, we will sort this out today, inshallah. Anything else?

RTE: It would be good if you do … if you can dissolve it [all the cash].

BE: Yes, we will dissolve it [all the cash], inshallah.

RTE: Did you do the other tasks I gave you?

BE: We’ll finish them in the evening. We sorted some out. We sorted out the Berat part, now we will first handle the part with Mehmet Gür and the rest we will do when it gets dark….Inshallah.

RTE: What did Sümeyye do?

RTE: Did she sort out both things?

BE: I think so, Dad. She said she emptied both.

BE: Yes, she said both of them, but you mean this by saying both things, right?

BE: What time will you arrive?

BE: Have a safe journey.

RTE: Do not talk on the phone.

BE: I was called from a secret number.

RTE: By saying mostly, did you fully dissolve it?

BE: We have not zeroed it yet, Dad. Let me explain. We still have 30 million euros that we could not dissolve yet. Berat thought of something. There was an additional $25 million that Ahmet Çalık should receive. They say let’s give this [to him] there. When the money comes, we do [something], they say. And with the remaining money we can buy a flat in Şehrizar, he says. What do you say, Dad?

RTE: Is Sümeyye with you?

RTE: No, there was another sound, that’s why I asked.

BE: Um, I mean, he can transfer $35 million to Çalık and buy a flat in Şehrizar with the remaining [cash].

RTE: Whatever. We’ll sort it out.

BE: Do you want [all the cash] dispersed, Father, or do you want some money for yourself?

RTE: For God’s sake. First, you should’ve transferred [it]. You could then do…

BE: We were able to give this much for now, it is already hard, it takes too much space. We are putting some of it in another place. We gave part of it to Tunç, and then…

RTE: Did you transfer all to Tunç?

RTE: To Tunç, I said, did you transfer all to Tunç?

BE: They asked, I guess, he said that he could take 10 million euros.

RTE: Whatever. Do not talk this like this about it.

RTE: OK, do it. I’m not able to come tonight, I will stay in Ankara.

RTE. I wondered if everything’s fine, so I called.

BE: No, nothing [no problems]. We finished the tasks you gave us, with God’s help.

RTE: Is it all zeroed?

RTE: Do not talk openly.

BE: Shouldn’t I talk?

RTE: I mean, do not keep anything on you, whatever it is, Samandıra or whatever….Send it to where it needs to be. Where do you keep it?

BE: OK, Dad, but I think we are currently under surveillance.

RTE: What have I been telling you from the very beginning!

BE: But is it the bodyguard team? Who is following us, Dad?

RTE: Son, you are being tapped.

BE: But they are also monitoring visually, they say.

RTE: That may be true. Now, we did some things [meaning reassignments of police officers] in İstanbul security.