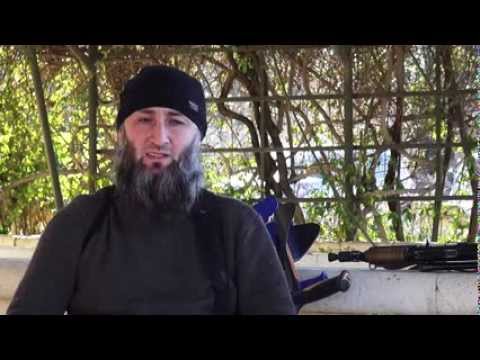 Abu Jihad Shishani, an ethnic Chechen fighter close to ISIS military commander Umar Shishani, has made a new video address in which he accuses Jabhat al-Nusra of “treachery”.

The video is the latest in a series of lengthy addresses made by Abu Jihad, who has previously spoken on behalf of Umar Shishani, who is a poor public speaker.

Later in the video, Abu Jihad says, “it became known that Jabhat al-Nusra had joined up with the so-called Islamic Front against ISIS”.

The time has come to speak out about the issue, he says, because Jabhat al-Nusra has teamed up with a “pro-democracy” group, so ISIS must explain its position to those of its “brothers” who may be sympathizing with Jabhat al-Nusra.

Abu Jihad begins by explaining who Jabhat al-Nusra are and how they came to Syria to help the fight against Assad and establish an Islamic State.

He says, “Jabhat was a part of ISIS, that is they were mujahideen from ISIS who were under an oath to ISIS.”

Abu Jihad claims that Jabhat al-Nusra leader al-Jolani had sworn two oaths to ISIS, the first to ISIS leader al-Baghdadi and the second stating that he would not make claims to power in Syria and would only be a military amir.

“As we see today he has broken the two oaths,” Abu Jihad says.

Abu Jihad accuses al-Jolani of aligning himself with groups who seek democracy and worldly aims.

In a lengthy anecdote, Abu Jihad accuses al-Jolani of spending too much money, and demanding too much, saying that al-Jolani tried to get hold of half a million dollars that had been sent from Iraq to ISIS in Syria “even though he gets millions of dollars from Aleppo province alone in trophies and tributes”.

Later in the video Abu Jihad talks about a story told to him by a fighter who fought alongside JAN in the storming of Aleppo Prison. He says that Abdullah al-Mohaisany, a Saudi jihadi preacher who claimed to have made an address during the battle, was in fact located on a road outside the prison where there was no fighting taking place.

Abu Jihad has made several public attacks on Mohaisany, including in a previous video, where he accused him of not being a real jihadi and said he had a penchant for having his photograph taken holding a weapon, but far away from any battlefield action.