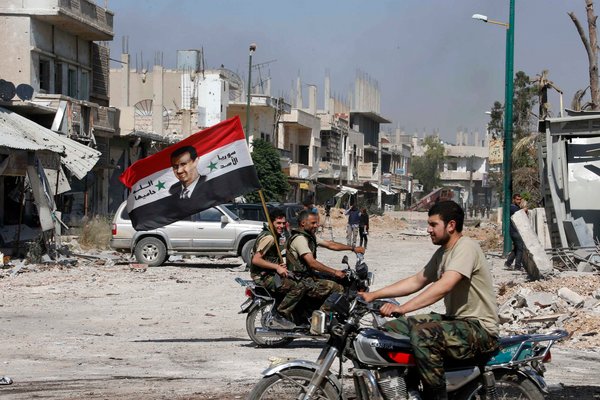 Dr. Thomas Pierret, a lecturer in contemporary Islam at the University of Edinburgh and a frequent commentator on the Syrian crisis, writes that arguments by Assad’s ally Russia regarding the need to dismantle insurgent forces as part of a political peace deal are “disingenuous”.

In a commentaryfor the Carnegie Endowment for International Peace, Pierret notes that Russia and Iran have supported a concept of political transition whereby insurgent militias would be dismantled, allowing the Syrian Arab Army and loyalist militias to reassert control. However, he argues that “current loyalist forces can neither act as the sole pillar of Syria’s future security architecture nor credibly integrate major rebel militias into their command structures”.

Over the last three years, the Syrian Arab Army and its affiliate militias have undergone transformations that mirror those of the armed opposition: they have become more homogeneously Alawite and absorbed large numbers of civilians recruited along sectarian lines, they have radicalized by embracing a sectarian anti-Sunni discourse, they have grown over-reliant on Shia Islamist foreign fighters (far more than the opposition), and they have established their own mafia-like war economy.

Because of all these flaws, loyalist forces are not fit for re-establishing order and security in regions now controlled by the opposition, even after a ceasefire. In those regions, the new security architecture must primarily rely on rebel forces themselves. This means that some form of logistical support for opposition forces will be necessary before, during, and after a peace process if these forces are to effectively provide law and order, contain extreme elements of the insurgency, and sustain a peace deal. And this, too, means that any peace agreement will have to address the most fundamental grievances of the Syrian opposition—namely, it will have to achieve a political transition away from today’s minoritarian and exclusionary power structure and give the opposition a real stake in Syria’s future order.

Pierret also argues against simultaneously reducing support for both the Syrian opposition and the regime. He says that Assad has certain advantages, not least the ability to manufacture weapons as well as using existing stockpiles:

In fact, symmetrically and simultaneously reducing support for both sides in Syria would probably do more harm than good since it would not affect the two sides evenly. Rather, it would create a new imbalance that could further exacerbate the conflict.

The Syrian government has been importing and stockpiling weapons for decades, and it still runs military factories. This means that Assad could fight for at least several months, if not years, even if his forces were completely cut off from the supply lines currently extended by Russia and Iran. For instance, most of the regime’s current airstrikes against civilian areas in Aleppo and elsewhere are carried out with do-it-yourself “barrel bombs” that need no material input from abroad.

Pierret argues that a solution to the crisis must involve a real political transition in which Assad’s minority Alawite regime no longer has complete control over Syria’s military and security apparatus:

The Syrian conflict is first and foremost about sectarian power sharing inside Syria. It cannot be solved while Assad and his fellow members of a small religious minority, the Alawites, exert total control over the military-security apparatus.