Iran Daily, Feb 23: Tehran’s Mysterious “Fleet” of Warships — Where is It Now? 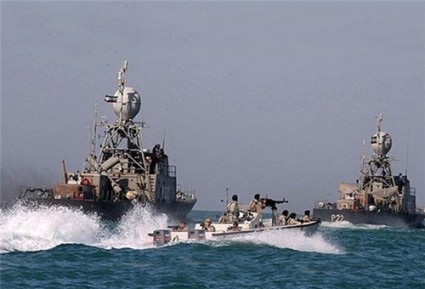 Yet another curious statement in the saga of Iran’s “fleet” — a destroyer and a logistics ship carrying three helicopters — which has moved around the globe in the last month, at least in statements from military commanders.

Earlier this month the commanders said the two ships were rounding South Africa and entering the Atlantic Ocean, on their way to a position off “the US maritime coast”.

That announcement caused a flutter in mainstream media about an imminent Iranian presence near America; however, within days, Iranian declarations put the “fleet” in the Gulf of Aden off the Arabian Peninsula — a retreat of thousands of nautical miles from the Atlantic Ocean.

On Saturday, Navy Commander Rear Admiral Habibollah Sayyari put out another update, in which the fleet appeared to be perpetually moving in the same place: “The 29th flotilla of warship is moving towards the Gulf of Aden and has entered the Red Sea.”

Asked by journalists about the earlier claim that the fleet was in the Atlantic Ocean, Sayyari assured, “That will be done.”

Sayyari appeared to back away from the rhetoric of a presence off the US coast, “We can also be present in the world’s free waters without entering other countries’ territorial waters.”

Sayyari did not appear to be bother about inconsistencies in the Navy’s statements. Instead, he told journalists of other breakthroughs, such as the launch of an advanced home-made destroyers in Iran’s territorial waters in the near future.

He also said, “Good news on (the development and launch of) submarines will be announced.”

In a pointed call for engagement with Saudi Arabia, the website of former President Hashemi Rafsanjani has posted a picture of him meeting King Abdullah and a summary of a 2008 conversation between the two men.

Rafsanjani pursued a diplomatic opening to the Saudis while he was President in the 1990s and has been a point man for the campaign of President Rouhani — his protege — for better relations with the Gulf States.

Last summer, Rafsanjani’s website published other photos of his meetings with Saudi monarchy under a headline calling for diplomacy with Riyadh in the present day.

Sherman met Minister of Strategic Affairs and Intelligence Yuval Steinitz and National Security Adviser Yossi Cohen. She told reporters that, under a comprehensive agreement, Iran will have a “limited, discreet, constrained, monitored, and verified” uranium enrichment program that answers its practical needs.

Israeli Prime Minister Benjamin Netanyahu was not convinced, “The combination of enrichment, weapons and launching abilities means that Iran is getting everything without giving practically anything.”

Netanyahu told the Cabinet on Sunday that he was “concerned by the fact that Iran essentially believes it will actualize its program and became a nuclear threshold state with enrichment abilities that won’t be touched and with intercontinental missile development abilities, which it is continuing without interruption”. He continued:

Iran must be rid of its ability to create or launch nuclear weapons. This has yet to be accomplished and without the insistence of the powers, it will not be accomplished. I hope that the states will stand firmly with the real demands of stopping Iran from becoming a nuclear threshold state.

Deputy Foreign Minister Abbas Araqchi said on Sunday that Iran and the 5+1 Powers will hold technical talks “next week” in Vienna on details of a comprehensive nuclear deal.

The talks will take place on the sidelines of a meeting of the International Atomic Energy Agency’s Board of Governors from March 3 to 7.

“The issues on the agenda are enrichment (of uranium), the lifting of sanctions and international cooperation on peaceful nuclear energy,” said Araqchi.

The two sides opened formal negotiations in Vienna last week. The next round of high-level discussions is set for March 17 in the Austrian capital.

Leading editors have criticized last week’s ban of the Aseman daily for an article discussing the Islamic law on retribution.

Authorities shut down the newspaper, which had launched less than a week earlier, for a quote from an analyst which said the law might be considered “inhumane”. Officials threatened the chief editor with prosecution over the article, even though he said the “inhumane” reference was the result of a “technical error”.

Mashallah Shamsolvaezin, former chief editor of several banned newspapers, said, “The Iranian Judiciary has developed a habit of banning and closing the entire publication whenever what they consider to be a mistake occurs.” He claimed “about 100 families lost their livelihoods” as a result of the ban, and challenged head of judiciary Sadegh Larijani to a public debate:

My question to Mr. Larijani is whether in the case of a mistake by a surgeon at a hospital, leading to the death of a patient, he would ban their entire hospital and close it down? If this is not the case, then the same should be true for a newspaper for its publications.

Aseman’s deputy editor Mehrdad Kheirandish accused conservative outlets of business motives in supporting the ban, “Conservative media organizations like Fars and Tasnim look at Aseman as competition and they do not want anyone in the arena but themselves. These media outlets do not tolerate competition.”

MP Ali Motahhari also denounced the ban. While chiding Aseman for its “one-sided” insult to “indisputable Islamic laws”, he said closure of the newspaper was an act fit only for “times of war, not normal times”.