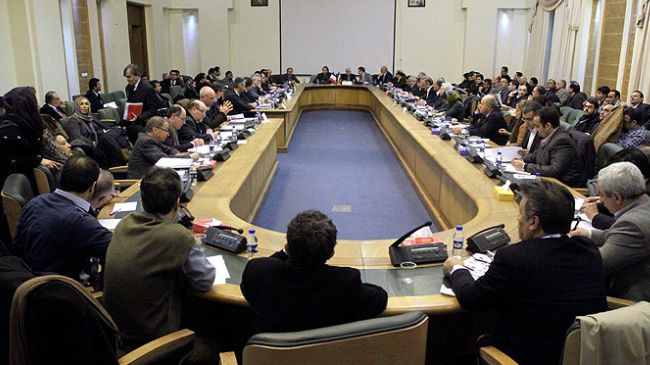 Michel Makinsky, who was with the French trade delegation to Iran last week, writes for EA:

It was an impressive display: more than 110 French executives, associated with the Medef Trade Association, spending several days in Iran discussing business possibilities.

Impressive and surprising — for French authorities, for Iranian officials, and even those on the mission.

A few weeks before their arrival at Imam Khomeini International Airport on 3 February, expectations were low, even about the prospect of a welcome for the delegation. French-bashing was on the rise in Tehran, with many Iranians infuriated with French Foreign Minister Laurent Fabius’ statements. Strong warnings had been delivered to the French executives: “You wish to come back here? Fine, but the entrance ticket will be very expensive.” Ministries and other Iranian organizations were reluctant to send top officials for public
shows. Instead,some middle managers would would carry out the duty of hosting, in a rather small remote center.

In Paris, MEDEF got the obligatory green light from French authorities, but this was far from enthusiastic. The message was: keep low profile, do not expect doing business, et alone signing “contrats du siecle” (contracts of the century). Businessmen were given the caution:

Sanctions remain almost intact. You are not there to jump into opportunities. Repeat to your Iranian interlocutors that you comply with sanctions and will never breach them. You are there for a limited purpose: you want to look at what’s happening and what may be the future, if any.

However, French firms have not forgotten Iran, amid the sanctions. They are confident in the enormous economic potential of the country, and in the capability of the Rouhani Government to address major challenges if and when sanctions are removed in a final nuclear agreement. They came to Tehran not for short-term goodies but to build long-term cooperation.

The core idea for the Iranian audience: “We want to contribute to your economic development in a win-win approach.”

One major incentive for these businessmen is an increasing frustration: for the past year, they have seen political delegations from a range of countries in discussions with Iranian officials. Worse, their primary German, Italian, and British competitors have been negotiating with visible support from their governments.

Meanwhile, the French Ministry of Foreign Affairs has been pursuing the hard line of “let us strangle Iran until the hopeful surrender”, with no regard for the business dimension. Until recently, this line was maintained, with the nuance that Finance Minister Pierre Moscovici is more open and pragmatic than colleagues in Paris. Foreign Minister Fabius’ statements and behavior during
nuclear negotiations, France’s friendship with Israel, and its business deals with Saudi Arabia added to Iranian anger.

The difficulties went back to last summer. As the Ministry of Foreign Affairs Ministry maintained its cool attitude — “You may go ahead, guys, but don’t make noise” — a US Executive Order targeting the Iranian automotive industry so affected the French automotive sector that corporate heads vigorously raised the issue with Government officials. Adding insult to injury, while Washington was insisting sanctions and pressures, advertising campaigns were launched in Iranian papers by General Motors: “We are back.” An initial group of GM cars was exported to Tehran while Iranian automotive manufacturers were approached for industrial cooperation. The Obama Administration turned a blind eye, and symptoms of US activity in other sectors was detected.

This led the French business community to take a decision in the autumn: even without any support, business leaders must go to Tehran, talk to Iranians, show openness.

Unsurprisingly, this upset Washington, and many warnings were delivered to companies: you will lose access to the American market and dollars, be blacklisted and sanctioned. In particular, banks were terrified — even when goods were not banned or recipients free from sanction blacklists, even when they had the French Treasury’s approval, they did not provide financial services for fear of US reprisals.

But in recent weeks, an unexpected opportunity and a perceptible change in mood — many firms were impressed that November’s interim nuclear agreement between Iran and the 5+1 Powers actually took effect from January 20. More and more managers began to show genuine interest in exploring possibilities. When the trip was announced to potential participants, a small river of interest became a large one. Beyond the confirmed participation of more than 110 executives, several dozen applicants were turned down.

Iranian officials had maintained their cautious approach, but once they saw the unprecedented size of the delegation, they saw their own possibilities. Decisionmakers, probably not far from President Rohani, prepared a first-class welcome and treatment, with ministers, heads of organizations, and public and private companies initiating intense discussions.

The importance of the event was seen and heard in the impressive political discourse of senior Presidential advisor Mohammad Nahavandian, the attendance of Industry Minister Nematzadeh and other deputies, top-level exchanges of views, and meetings in the Head of State Conference Center. Iranian and foreign media tried to catch any message.

French firms behaved impeccably: maintaining their commitment to comply with sanctions, no promises of “business as usual”, no false hopes. However, they showed a clear intention to accompany Iran in the rebuilding of its economy when sanctions are lifted. The businessmen assured, “We are old friends”, even as they refused most interviews and never included political assessments in their statements.

Meanwhile, the Americans had made a serious mistake. Three days before the flight to Tehran, a select group of top executives were summoned to the US Embassy in order to meet Peter Harrell, the State Department official in charge of sanctions. He expressed Washington’s displeasure with the trip and warned against any business with Iran while sanctions remain near-intact. The businessmen replied that they would not cross red lines.

The Obama Administration continued its pressure. Secretary of State John Kerry called Laurent Fabius to let him know of unhappiness with the “unappropriate” visit. Undersecretary of State Wendy Sherman delivered a harsh message during a Congressional hearing.

It was a big miscalculation. As Medef softly answered with a politically correct statement, Finance Minister Moscovici gave clear support to the delegation, and even Fabius was cautiously positive.

When Barack Obama subsequently told French President François Hollande that he was angry and threatened French business with harsher sanctions, he did not understood the great upset of the French business community with unfair competition.Nor did he appreciate that, as conditions in France are far from comfortable, the Hollande government will need to take account of private firms as they try to bolster a fragile economy.

From those calculations, a victory in Tehran — for the French business community and for the Rouhani Government — appears to have been won.

Michel Makinsky is Lecturer at the France Business School (Poitiers) and General Manager of AGEROMYS International Consultants. He is the editor of L’Economie Réelle de l’Iran au-delà des Chiffres (The Real Economy of Iran Beyond Statistics), published this month.