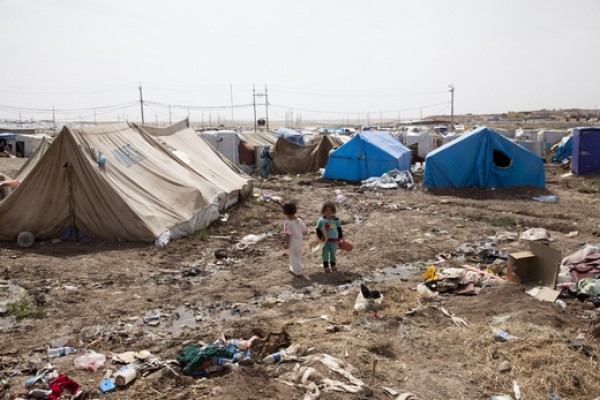 Neil Sammonds, Syria Researcher at Amnesty International, visited the Domiz refugee camp near Dohuk in Iraqi Kurdistan. He found overcrowding, and harsh conditions particularly for those Syrian refugees living on the outskirts of the camp.

Domiz was established by local authorities in April 2012 to house Syrian Kurds. The camp is some 20 kms southeast of Dohuk city, around 60 km from Syria/Iraq border. There are over 200,000 Syrian refugees in Iraqi Kurdistan, and Domiz is home to more than 45,000 of them.

Sitting on a thin mattress inside a ramshackle structure on a muddy hilltop, elderly Abu Fares told me how he came to live in poverty in Iraq’s northern Kurdistan region.

For the past 11 months, he and his wife – along with around 200 families – have been eking out a living in makeshift shelters on the outskirts of the overcrowded Domiz refugee camp near the city of Dohuk.

They are among tens of thousands who fled here amid the ongoing armed conflict in Syria.

Before sitting down to listen to Abu Fares, we left our mud-caked shoes outside the fragile home they had erected themselves. Once inside, sweet tea was brought and poured.

His wife, Um Fares, looked glum amidst a cloud of her own cigarette smoke. Then her one good eye noticed the mud on my trousers. “Let me wash them for you,” she says. “You look like my son.”

I was taken aback by her generosity, distracting me briefly from my conversation with Abu Fares. He had been detailing some hardships – inadequate water, food, toilets – of life in this area outside the camp.

Dohuk is the main city in the governorate of the same name that borders northeastern Syria. The area hosts the majority of the 200,000-plus Syrian refugees now living in the Kurdistan Region of Iraq (KRI).

There is a real sense that this refugee city is now becoming established with its own economy.

I passed hairdressing salons, a falafel shop and a boutique for women getting married. The residents of Domiz camp are free to come and go as they please, and many have found work in nearby Dohuk and elsewhere.

But now with it full to overflowing, those housed outside of the perimeter, live in harsh conditions.

With a population of only around 4 million, the pressure on the KRI is increasing. From a promising start, and boosted by a strong economy and Kurdish solidarity, the response from the Kurdistan Regional Government (KRG) has grown more tepid with the passage of time.

The KRG closed the border with Syria from May to mid-August 2013 – when some 50,000 mostly Kurdish Syrians walked into the KRI in the space of a fortnight – and tightened it again in mid-September.

Syrian refugees said that the armed Syrian Kurdish group, Yekineyen Parastina Gel (People’s Protection Units) or YPG, has also discouraged Syrians from leaving to the KRI, if not violently.

It is a similar story in the KRI’s other two governorates, Erbil and Sulaimaniya, which were meant to accommodate a greater number of the refugees.

Kawergosk camp near Erbil city sprang up last August to house the incoming refugees. Within 12 hours, I was told, the land was obtained and a day later electricity lines were laid. Bulldozers, security forces and volunteers joined in digging and putting up tents, and in came the refugees. One representative of an aid organization said that the KRG had facilitated here “the fastest and most effective refugee response” he had seen in 20 years of such work worldwide.

The KRG says it has pumped in $120 million to cater for the Syrian refugees. But from this promising start, some felt that much more could be done.

“Kurdistan’s response should not be compared favorably with Syria’s other neighbors,” a senior NGO worker said, “but rather unfavorably given all those advantages it has.”

Like Abu Fares and his family at Domiz, many refugees from Syria have been less impressed with conditions in Kurdistan.

In November, rainfall on the hilly terrain around Kawergosk camp flooded many tents, leaving more than 200 families uprooted once again.

At the orderly and modern Darashakran camp, also in Erbil, men muttered about the lack of work.

“If you work you have honor,” Imad from Qamishli said. “If not, you have no dignity.”

I heard similar comments at Arbat transit camp, out east in Sulaimaniya near the border with Iran.

“We didn’t come here just to sit,” said one, while others there complained that Syrian workers were often paid much less than others.

Women at Arbat also complained that Iraqi Kurdish security officials there forbad them from leaving the camp unless accompanied by a male relative, although a regional government official told us later that this should not be the case.

Many refugee school children have been unable to study due to a lack of facilities.

The regional government’s actions have sparked further gripes. Freedom of movement and access to residency permits have both been restricted partly due to security concerns, making travel and access to employment harder for Syrians and limiting their self-reliance.

In the meantime, the Kurdistan flags will fly above the camps in the KRI and the refugees will feel safe there. But whether conditions will improve for Abu and Um Fares and the many like them – and whether more will be allowed to come, or how long they will stay – no one knows.

Read the original on the Amnesty International website here.