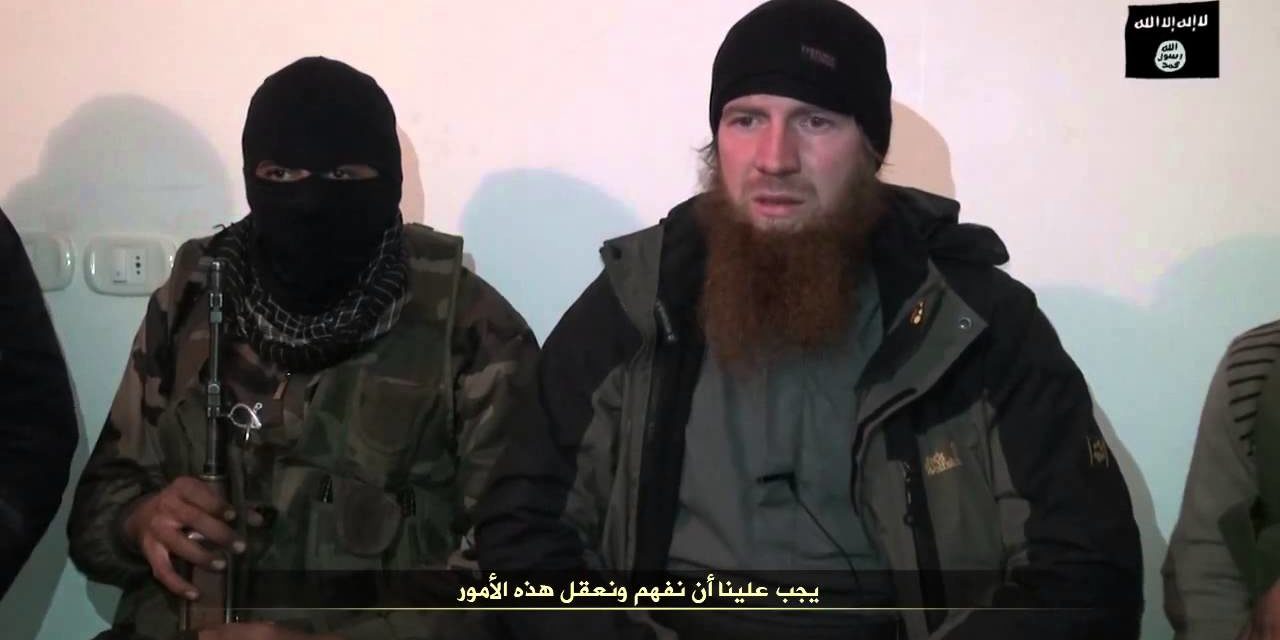 A new propaganda video from the Islamic State of Iraq and ash-Sham shows the military leader of the faction’s northern division, the ethnic Chechen Umar al-Shishani, giving an address regarding the recent fighting in Al Bab in Aleppo Province. The second part of the video shows a montage of operations in Al Bab.

Several important pieces of information can be gleaned (translation below):

1. According to Umar, who says that “today we captured Al Bab”, the footage of his speech was shot last week and released on Monday.

2. Umar, who has previously made video addresses in Russian, speaks in formal Modern Standard Arabic with a heavy Russian accent. Unlike his previous addresses, this video is not intended for North Caucasian, Russian-speaking viewers but an Arabic-speaking audience.

3. Umar appears to be genuinely shocked and surprised that other insurgents would attack ISIS headquarters — especially when he and his men were absent, fighting in Deir Ez Zor Province in eastern Syria.

4. Umar asks the Syrian people why they do not accept the Muhajireen (foreign fighters), even though hundreds from his faction have been killed in the recent battle and thousands of foreign fighters have died in total.

5. Umar describes the insurgents fighting ISIS as making a pact with the Taghout (the “idol worshippers”) who want to continue the Assad regime.

This video message follow another speech made last week by Umar, via his second-in-command Abu Jihad Shishani (translation below), in which he addressed the Syrian people and asked why they did not support the foreign fighters.

The leap to addressing an Arabic-speaking audience comes two months after Umar made an ideological jump, swearing an oath to ISIS leader Abu Bakr al–Baghdadi in late November and taking many of his men with him from the faction Jaish al-Muhajireen wal Ansar. Doing so, Umar cut his ideological umbilical cord to the North Caucasian jihad and the leader of Imarat Kavkaz, Dokku Umarov. (Notably, those of Umar’s men who had previously sworn allegiance to Umarov refused to follow him in swearing allegiance to Baghdadi.)

Umar’s previous messages have mostly focused on talking about the gains he and his men had made. Later video addresses — made with Abu Jihad Shishani — explained why he had sworn allegiance to al-Baghdadi, with one attempt to address wider jihadi ideology.

Today we captured the town of Al Bab and cleansed it from the criminals.

We came to liberate the region from the Nusayris (Alawites), and left our headquarters in the Northern Aleppo countryside in the Vilayat of Aleppo empty. And they attacked us like cowards. Like cowards, they attacked us. We canceled our operation because of these cowards.

We didn’t come to fight you and especially the Syrian people. We buried in this land around 500 foreign fighters from our brigade. And thousands of other foreign fighters have been killed. We will not leave until you repent and surrender your weapons to the headquarters of ISIS. We will even give sanctuary […]. We cannot prevent people from accepting Allah the Almightly, we cannot prevent repentance….

I ask Allah to secure our brothers… right now there are brothers trapped in many places, inshallah, we will not leave you until we come for you and aid you. And this speech is especially for the people of Syrian of this blessed land. Those traitors have sold you out and made a pact with the Taghout, with agents from the East and West, knowing full well that they want to establish a new regime with the Nusayris (Alawites), and taking advantage of the name of the Syrian people to establish their project. By Allah, we did not come to kill you, O brothers and sisters. We did not come here to drink the blood of this people. And We we want to stand up for this blood. These traitor cowards who made this whole fitna…

I ask Allah to unite all the Muslims and unify them to make this land under the rule of Sharia Law.

(The image in the video shows Abu Jihad on the far right and Umar second from left.)

We loved you even before we met, because the hadith talk of Sham and its people.

When we heard about the great oppression in Syria, we held you higher than our families and our land.

When we came here, and looked for which group to join, the idea to form an independent group never crossed our minds .

We were joined several groups, in search of the correct ideology, but we could not choose that — they were all about freedom and democracy.

So we decided to stay an independent group until until we find the correct group (Jaish al-Muhajireen wal Ansar).

We asked that from time to time we could send fighters back to the Caucasus to help there, but they said that we cannot dictate our terms.

So we left the group and remained independent until we found the declaration of the Islamic State of Iraq.

The first thing we did was to study their history in Iraq, because we do not follow titles but the Truth.

When we studied their history, we found them sincere before the Lord. They have learned from their trials.

All have turned away from them, the “unfaithful”, the government, scholars, etc., but they survived.

Even when their own people turned against them (Sahwa), the Lord will protect them and gave them the victory.

Next, we met up with them and found them polite, sincere and simple.

As we requested them from time to time we send people to the Caucasus. We were surprised their reaction.

They were enthusiastic and said that for a long time looking for ways to help the Caucasus Emirate. But they could not find a way.

Baghdadi said, of course, since it is our duty.

Since then we have given our oath to ISIS, and day after day we’re convinced that this is the correct group.

The attack on us from all sides means we are in the right.

As for current events, we will talk about what happened.

We were in Deir Ezzor, planning more attacks on the Nusayris (Alawite) and one day before we heard:

Our home in Aleppo was attacked by traitors.

Our headquarters were mostly empty, except for a few guards, and in the houses were only women and children, as the men were at the front.

If they had been men, they would have warned us, but they are cowards.

To the Syrian people, but not the tyrants, we have questions.

Is this your gratitude? After our thousands of victims? The Caucasians alone had 500 of them.

Another question — how do you meet your Lord? When I (we) were in trouble you just stood and watched.

But when we heard that you were being killed, we came with our money and our blood.

When they heard that our children have been killed, they stood and watched, and when we heard the same, we came to save them.

[Important] Did you know that more than 50 immigrant sisters have been captured by these traitors? Some of them were raped, some killed.

We did not come here apart from to help people to establish Sharia. So why did they attack us?

And if they fight against us because of a mistake, then you know their crimes and mistakes outweigh those that we could make.

And sometimes they fight, but are quickly stopped. By whom? By their daddy sitting in Turkey.

We do not deny there have been mistakes or crimes by individuals but we sentenced them and some we even executed .

This is the daddy in Turkey, who feared ISIS’s expansion and the possibility of establishing the Caliphate and told them to fight against us.

Does it not speak volumes to you when the people fighting against us are criminals and bandits like Hayani, Afash and Jamal Ma’rouf.

And people in their ranks, people who claim innocence, but their goal is to destroy ISIS and bring back the Taghut (Assad).

The conspiracy is not against ISIS but against the whole of the Syrian people, they want to return you to the law of the Taghut for decades.

Do not give them a chance to return you to shame and humiliation.

With regard to this freedom, which you talk about, I will give you an example of their freedom .

A Muslim left their country and went to America to earn money and live an easy life.

He stayed there and his children grew up, and one day his daughter came with a man, her boyfriend.

The father was furious, so he hit her and threw her out of the house, she called the police, who arrested him.

She said that she would drop the charges if she had a house, and he agreed. After he was released, he returned, but she chucked him out.

Now he lives on the street, that’s their freedom.

Our message to the rest of the groups is this: now you have to choose. There cannot be two camps, as the Prophet (peace and blessings be upon him) said.

There is the Camp of Faith and the Camp of Hypocrisy — so choose your side, because the world has begun to be divided into two camps.

And do you really think you’ll will be protected? The same thing will happen to you if you do not change your ideology.

We are not telling you to join us but to join the truth and be with it.

Our third message is to the sincere scholars, we need you to take a firm position in relation to what has happened and not be silent.

Our final message is to the criminal traitors and all who help them by giving fatwas and money.

You are not just traitors and criminals, but you also stupid. You do not learn lessons from the people who came before you. Those who tried to extinguish the light of Allah but they did not succeed in Russia, they attacked us for more than 20 years and they could not do it.

And you know how strong Russia is and what you are compared to Russia, but they could not beat us.

Or look at the brothers in Iraq, the Americans fought with them for a long time with the help of traitors.

But they lost and left Iraq, so what makes you think that you can win?

We will not tell you, “we do this” or “we will do it”. We just do it, without a word. You will see what we will do with you.

As for those who twisted fatwas from the scholar-minions, we urge you to seek the Lord (repent) and that you do so in public.

Whoever does this will be safe and we will not hurt him .

Once we cut the head of the snake, we can regroup and fight back against the Nusayrite Government.