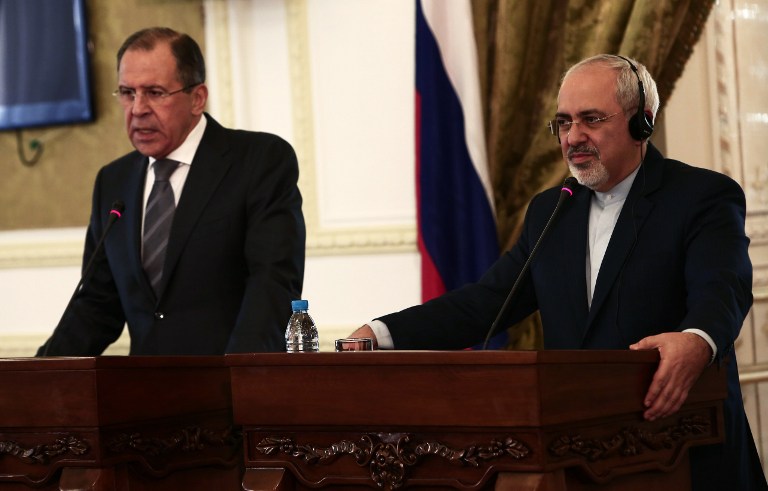 Relations between Moscow and Tehran were showing “positive trends”, Russia’s Foreign Ministry said on Wednesday, ahead of a planned visit to the Russian capital on Thursday by Iran’s Foreign Minister, Mohammad Javad Zarif.

The Russian Foreign Ministry praised the “rapidly developing” relations between the two countries, and said that the “dynamics of political dialogue and economic contacts” had “intensified”.

“We intend to further expand mutually beneficial ties with Iran to continue cooperation in the interests of regional stability and international security. Our relationship is based on the principles of good-neighborliness and friendship, and is not subject to political considerations,” the Ministry added.

Unsurprisingly, Moscow did not miss the opportunity to trot out its troika of hobby horses regarding the Geneva II conference, scheduled for January 22: that Geneva II is the only way forward for a peaceful solution to the crisis; that the Syrian people must decide their own future themselves; and that Iran must attend the conference.

Russia, which has been pushing for Iran to have a top-table presence at the Geneva II conference on Syria, argued that, in its view, Russia-Iran relations were instrumental in improving stability in the Middle East, and that Iran should therefore attend the talks.

“The interaction between the two countries could have a positive impact on the overall situation in the region and the Middle East, to create additional conditions to ensure stability there,” the Foreign Ministry said, adding that:

The positions of Russia and Iran on the Syrian crisis have much in common, especially regarding the inevitability of a peaceful resolution. The path to this is via the convening of an international conference on Syria ( “Geneva -2”). According to Russia, all international and regional forces which have influenced the course of events in the Syrian Arab Republic must participate. This includes Iran. We presume that Geneva II will be built on the basis of the provisions of the Geneva communique of June 30, 2012. All important decisions about the future of Syria must be taken by the Syrians themselves by mutual consent and without external pressure.

State-owned and pro-Kremlin outlets framed the Foreign Ministry statement from the perspective of Geneva II and the nuclear issue. RIA Novosti headlined Wednesday with “Lavrov set to discuss nuclear policy and Geneva II with his Iranian counterpart”.

The Russian Foreign Ministry also commented on the P5+1 agreement with Iran regarding the latter’s nuclear program, noting that ” Russia, as before, will do everything in its power to ensure the positive development of the process and to achieve a final settlement of the issue through negotiations.”

Moscow also noted possibilities for future Iran-Russia cooperation over the littoral states of the Black and Caspian Seas, and Afghanistan.

WHAT ABOUT RUMORS OF A BARTER DEAL?

The statement made no allusion to the story of a barter deal between Iran and Russia, as reported in a Reuters exclusive on January 10. According to Reuters, the two states are negotiating an oil-for-goods barter worth $1.5 billion a month, which would raise Iran’s oil exports significantly. Reuters cited “Russian and Iranian sources close to the barter negotiations” as saying that “final details were in discussion for a deal that would see Moscow buy up to 500,000 barrels a day of Iranian oil in exchange for Russian equipment and goods”.

Meanwhile, private newspaper Nezavisimaya Gazeta (NG) noted that Russian officials have neither confirmed nor denied the Reuters report, noting in a Wednesday story that Washington had been disconcerted by it.

NG speculated that the goods Russia has offered in exchange for Iranian oil could include weapons, and added, “Russia is strengthening its position in the Middle East. In the near future, there is the possibility that a package of important agreements regarding the military- technical and economic cooperation with Iran. These include supplying Tehran with the modern air defense missile systems (SAM) Antey -2500.”

Noting that Russia had backed out of a previous deal to supply Iran with its S-300 air defense system, NG speculated that Moscow could now be considering a more extensive deal with Tehran:

Apparently, the situation will become clearer next Thursday when the Iranian Foreign Minister Mohammad Javad Zarif will visit Moscow. It is possible that a delegation of Iranian military experts will accompany him.

Iranian media, in English and Persian, has played up the reports of an oil barter with Russia, though it has not confirmed or denied that any such deal is in progress. Mehr News, citing State outlet IRNA, said Iran had “started bottom dredging of northern oil terminals in Neka in Caspian Sea to prepare the terminal for hosting gigantic oil tankers….Mehr News wrote in a report in Last June that Russia had expressed interest in purchasing Iranian oil, and that even Iran and Russia had launched negotiations to trade oil. Russian authorities proposed at that time to Iran that an inverse swap line established thus making it possible to transport oil from Iran’s southern terminals to Caspian Sea.”

Mehr notes that sanctions have allowed Russia to export more of its Urals crude, including to EU markets formerly supplied by Iran. “Statistics show that export of Russian Urals crude has saw a dramatic rise and exceeded 2.2 million barrels of crude per day. Urals crude has the advantage of being sweeter than oil produced by Persian Gulf Arab states and Iran, and it is less costly to transport Urals crude,” Mehr added.