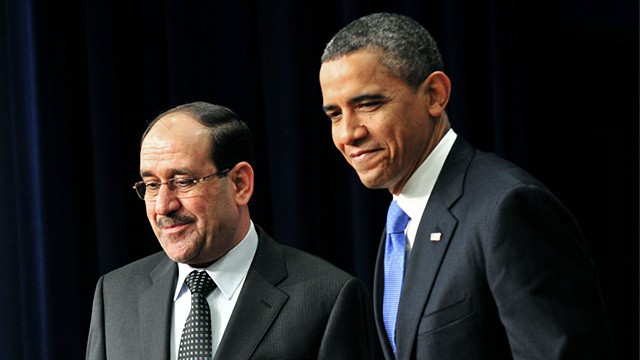 In a significant escalation of military aid, the US is sending dozens of Hellfire missiles and low-tech surveillance drones to Iraq’s al-Maliki Government, ostensibly to fight the Islamic State of Iraq insurgency.

The package includes a shipment of 75 Hellfire missiles, delivered to Iraq last week, which are strapped beneath the wings of small Cessna turbo-prop planes and fired at camps, vehicles, and suspect.

Ten ScanEagle reconnaissance drones are expected to be delivered to Iraq by March.

The Islamic State of Iraq has been blamed for a series of assasinations and bombings. Last week they killed the commander of the Iraqi Army’s 7th Division and more than a dozen of his officers and soldiers as they raided a training camp.

Beyond ISI, Iraq has had its most violent year since 2008, with also 7000 people killed. Opposition to the al-Maliki Government has also risen, especially among Iraq’s Sunni minority, over claimed repression, detentions, and discrimination.

In November, during Prime Minister Nuri al-Maliki’s visit to Washington, he and President Obama “emphasized — on an urgent basis — the need for additional equipment for Iraqi forces to conduct ongoing operations in remote areas where terrorist camps are located”.

However, discussion at that time seemed to be more about Iraq’s regional power rather than the challenge from ISI, with talk of dozens of F-16 warplanes and Apache helicopters being sent to Baghdad by late 2014.

This week’s developments not only re-focus on the insurgency, but raise the prospect of an Iraqi request for armed US drones.

Bernadette Meehan, a spokeswoman for the National Security Council, said, “We have not received a formal request for U.S.-operated armed drones operating over Iraq, nor are we planning to divert armed I.S.R. over Iraq.”

However, the State Department’s Jen Psaki set the scene for possible assistance on Sunday: “[The ISI is] seeking to gain control of territory inside the borders of Iraq….[It is a] common enemy of the United States and the Republic of Iraq, and a threat to the greater Middle East region.”