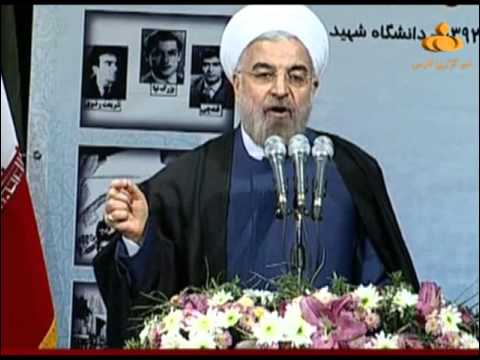 A 22-minute video illustrates how President Rouhani, in his National Student Day speech on Saturday, responded to the challenge of “hard-liners” in the audience:

Students involved in the Basij militia, seated in the middle of the audience, started chants demanding that Rouhani maintain Iran’s right to uranium enrichment.

However, they were soon overtaken by the President and by reformist students who called for freedom for political prisoners, incluidng opposition leaders Mir Hossein Mousavi and Mehdi Karroubi.

In response to the chants that “Nuclear energy is our inalienable right,” which appears to have been started by Basiji students but was quickly adopted by many others, Rouhani said, “Certainly, it is like this.” When he added, “The centrifuges must spin, but life too must spin,” repeating one of his campaign slogans, the crowd erupted in wild applause.

“The administration, in this promise that it gave to the people, will stand to the end,” Rouhani said, adding that there are other inalienable rights, such as progress, development and improvement in the livelihoods of the people.

Rouhani said that breaking the oppressive sanctions was also an inalienable right. To this, many Basiji students began to chant “Death to America.”

As Rouhani attempted to continue, other students responded to the Basiji students with “Political prisoners must be freed,” many of whom are still under arrest after the 2009 crackdown.

As Rouhani attempted to continue, the Basiji students responded with “The hypocrite seditionists must be executed.”…However, the pro-Reformists students then responded with “Ya Hossein, Mir Hossein,” which was one of the popular chants during the 2009 protests.

Rouhani finally attempted to defuse the situation calling for unity, but added, “We have to raise the threshold of tolerance for one another.” He continued, in strong criticism toward Iran’s hard-liners and their aggressive foreign policy, “If we cannot solve a domestic issue of our own with calm, with reason and within the framework of the constitution by creating a consensus, if we cannot solve domestic issues, how can we claim we want to solve the complex issues of the region and the world?”…

Rouhani’s comments received clashing chants, but the Basiji chants were quickly overpowered by chants in support of Mousavi and Karoubi. At a later moment, students chanted “The real basijis are Hemat and Bakeri,” two individuals who died in the Iran-Iraq war and whose families today are supporters of Reformists.

In an indirect attack, Rouhani then chastised Basiji students and hard-line clerics for receiving money from government institutions. He praised the former revolutionaries, such as Ayatollahs Taleghani, Motahari, [and] Beheshti, along with Mehdi Bazargan and Ali Shariati, for guiding the student movements and added, “Let’s remember that the time that they had the responsibility of the student movements, they received neither a rial nor did they take orders from the Government.” He added, “We have to follow the path of those dear ones.”

Rouhani continued in his criticism of today’s Basiji students, and told them, “Basij is not limited to the Basiji students. If a Basiji is someone who thinks in the way of a Basiji, who sacrifices interests of the individual and group for the interest of the nation and religion and Islam, then we have 75 million Basiji in this country.”