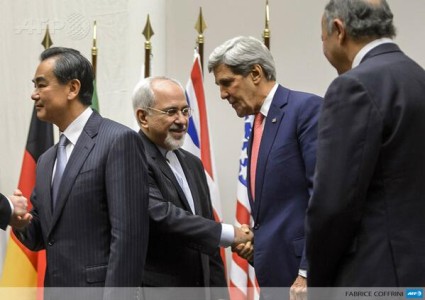 Special: Why This Interim Nuclear Deal Is Far Bigger Than You Think
Document: Full Text of the Interim Nuclear Agreement
Spotlight: Secret High-Level Talks Between US and Iranian Officials Since March

Iran and the 5+1 Powers (US, Britain, France, Germany, China, and Russia) signed an interim deal on Tehran’s nuclear program in Geneva early Sunday.

The agreement was reached after more than four days of detailed negotiations, two weeks after another meeting in Geneva had failed at the last minute to deliver an accord.

I hope we can start restoring the lost confidence.

The Iranian people demand respect for their rights and dignity, it is important to restore their confidence and I hope this process can do that.

Zarif reiterated that the deal allows Iran to continue enrichment of uranium up to the 3.5% level, denouncing an “unnecessary crisis that was serving only those who wish ill to Iran”:

President Obama welcomed the deal as an “important first step”, saying it includes “substantial limitations” on Iran and cuts off any move to a militarized nuclear program.

Tehran has agreed to suspend its enrichment of uranium to 20% — still civilian-grade but with the potential to be enriched further for a nuclear weapon — and to convert existing stock to fuel plates, putting it beyond any military use.

Iran has also agreed that any increase in the stock of 3.5% uranium over the next six months will be off-set by reductions elsewhere in its program. There will be a stricter inspections framework, developed with the International Atomic Energy Agency.

On one of the issues that blocked agreement two weeks ago, Iran has suspended construction of the Arak heavy-water reactor, due on-line in late 2014. Critics argue that the natural by-product of plutonium could be used in a military program.

In return for setting the limits, Iran will get $4.2 billion in sanctions relief over the next six months, according to a Western diplomat.

The number appears to refer to the release of frozen funds and not to the easing of any restrictions on trade in areas such as petrochemicals and automobiles.

US Secretary of State John Kerry said the deal does not recognize Iran’s right to enrich uranium. He added:

Whereas Iran today has about 200 kilograms of 20 percent enriched uranium, they could readily be enriched towards a nuclear weapon. In six months, Iran will have zero – zero. Iran will not increase its stockpile of 3.5 percent lower-enriched uranium over the next six months, and it will not construct additional enrichment facilities. Iran will not manufacture centrifuges beyond those that are broken and must be replaced.

Very importantly, Iran will not commission or fuel the Arak reactor – Arak, A-r-a-k, reactor – an unfinished facility, that if it became operational would provide Iran with an alternative plutonium path to a nuclear weapon.

In the last Geneva talks, France had objected to public recognition of the right to enrich. Iranian Foreign Minister Zarif indicated days later that, if an agreement permitted Iran’s program to continue, it might not be necessary to have explicit recognition in the agreement.

Earlier Sunday we reported on secret high-level US-Iran discussions from March, contributing to the interim nuclear deal finally signed in Geneva this morning. US officials said Israel found out about the talks only when President Obama informed Israeli Prime Minister Benjamin Netanyahu at a White House meeting on September 30.

Now West Jerusalem has hit back:

[The Israelis] knew they were being kept in the dark as the U.S. conducted secret talks with Iran, and the knowledge that the White House was “going behind Israel’s back” was one of the key sources of tension between Israeli Prime Minister Benjamin Netanyahu and President Barack Obama, according to a senior Israeli minister and other Israeli officials.

“We did not know from the beginning, but we knew, we had intelligence that these meetings were happening,” said the Israeli minister….He said that a “friend in the Gulf” shared intelligence with Israel that the meetings were taking place, and urged Israel to find out more. “I would like to say we knew the content of the talks, but we didn’t. What we knew was that the U.S. was choosing not to tell us about them and that was very worrying.”

That “friend,” one foreign ministry official said, was Saudi Arabia.

The Supreme Leader, in an exchange of letters with President Rouhani, has welcomed Sunday’s interim nuclear agreement and looked forward to the following negotiations:

What you have gained, an appreciation and thanks for the nuclear negotiation body and officials is befitting, and can be the basis for the next wise steps. Undoubtedly, the…prayers and the backing of the Iranian nation was the factor in this success, and will be in the future. God willing, persistence against those who want too much has to always be the criteria for the straight path of the officials, and will always be, God willing.

Success in these negotiations showed that observing all of the principles and red lines of the system, by presenting the logical and reasonable positions of the Iranian nation…the big powers also respected the rights of the Iranian nation. And the next steps also, in the direction of solving the final differences can be taken with strength.

Undoubtedly, reaching this deal will be in the interest of all countries in d region, global peace & progress & in line w/ win-win approach

PM Netanyahu: "What was achieved last night in Geneva is not an historic agreement; it is an historic mistake"

For the first time, the world’s leading powers have agreed to uranium enrichment in Iran while ignoring the UN Security Council decisions that they themselves led. Sanctions that required many years to put in place contain the best chance for a peaceful solution. These sanctions have been given up in exchange for cosmetic Iranian concessions that can be cancelled in weeks. This agreement and what it means endanger many countries including, of course, Israel.

srael is not bound by this agreement. The Iranian regime is committed to the destruction of Israel and Israel has the right and the obligation to defend itself, by itself, against any threat. As Prime Minister of Israel, I would like to make it clear: Israel will not allow Iran to develop a military nuclear capability.

Economics Minister Naftali Bennett delcared, “Israel does not see itself as bound by this bad, this very bad agreement that has been signed.”

And Finance Minister Yair Lapid complained, “You stand and shout out until you’re blue in the face, and you try to understand why they’re not listening. The world wanted an agreement.”

President Rouhani has addressed the Iranian nation on Sunday morning, hailing the interim nuclear agreement as an effective recognition of Iran’s right to enrich uranium.

Rouhani also emphasized the immediate easing of some sanctions and the prospect of a full removal within a year.

The President said that, with the conclusion of a comprehensive agreement next year, any belief of Iran’s pursuit of a nuclear weapons will be a “historical joke”.

Secret Talks Between US and Iranian Officials Since March

With the conclusion of the interim nuclear agreement in Geneva, the Associated Press has released details of secret high-level talks between Iran and the US since March.

Information about the discussions was withheld from US allies, including Israel, until September.

Three “senior Administration officials” said the last four meetings were held after President Rouhani was inaugurated in August. They said the sessions produced much of the interim agreement negotiated and agreed in the Geneva talks between Iran and the 5+1 Powers.

The officials would not give the names of the Iranian representatives, but said they were career diplomats, national security aides, and experts on the nuclear issue.

The officials said the March talks, building on the role of Oman’s Sultan Qaboos in negotiations such as the release of three American hikers from an Iranian prison in 2011, tried to break the deadlock in high-level talks that resumed in Kazakhstan in February.

They said the meeting also discussed Iranian involvement in Syria, Tehran’s threats to close the Strait of Hormuz, and the status of Robert Levinson, a missing former FBI agent who the U.S. believes was abducted in Iran, and two other Americans detained in the country.

Tbe US only began informing its allies after a phone call between Obama and Rouhani, who was in New York for the United Nations General Assembly, in late September. The US President briefed Israeli Prime Minister Benjamin Netanyahu during a September 30 meeting at the White House, telling him about the two meetings in the summer.

After telling Netanyahu about the secret talks, the United States then briefed the other members of the 5+1 Powers.