Iran Forecast, Nov 6: Tehran Says Nuke Deal “Possible Within a Week”; US Says Not So Fast

Foreign Minister Mohammad Javad Zarif, speaking to France 24, has set out Iran’s PR line on the eve of nuclear talks with the 5+1 Powers.

Zarif began with the upbeat, “I believe it is even possible to reach that agreement this week.”

Then the Foreign Minister injected caution, “But I can only talk for our side. I cannot talk for the other side.”

Tehran is thus taking the lead on optimism while protecting itself before domestic and international opinion — if there is no advance at Geneva, the reason will be the lack of willingness of the 5+1, particularly the US, to engage in genuine two-way negotiations.

It looks like Washington will play into the latter strategy.

A “senior administration official” has fed journalists the line that Tehran must make the initial concession at Geneva:

What we’re looking for is a first phase, a first step, an initial understanding that stops Iran’s nuclear program from moving forward and rolls it back for first time in decades.

This phase must involve Iran’s enrichment of 20% uranium, its stock of 20% fuel, and international monitoring.

And what will the US offer in return?

What’s more, the official said, the “very limited” relief will only be for six months: “If Iran doesn’t meet its first-stage commitments or if there is no permanent agreement after six months, the economic sanctions would be re-imposed.” 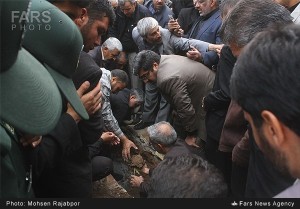 As is the case with Iranians slain in Syria, the Islamic Republic’s media said that Jamali Zadeh was slain by “Wahhabi terrorists” near the Sayyida Zeinab shrine near Damascus.

Fars News, the outlet of the Revolutionary Guards, threw another punch at the Rouhani Government on Tuesday: it declared that recent appointments of officials in key Ministries are the return of the “supporters of extremists”.

The outlet specifically claimed that former MPs from 2000-2004, during the years of President Khatami, had been put into the Labor Ministry.

Fars News also highlighted the criticism of MP Mehdi Bazrpash who accused “some recent appointments” to senior ministry posts of “individuals possessing two allegiances.” Bazrpash alluded to those “who were at least active in [2009] sedition-creation, active in the famous resignation of the Sixth Parliament [2000-2004 when Reformists held majority] or the resignees of that time.”

The Guards are in a running battle with Hassan Rouhani over foreign policy and economic issues, seeking to limit the President’s authority.

An effective was struck in September after the Supreme Leader backed Rouhani: the President would not act against the Guards’ major economic interests, while the elite force would not block the nuclear talks with the US and the 5+1 Powers.

However, that deal does not halt all criticism, especially with the Government maneuvring for space on domestic as well as international issues.

Look for the Thursday-Friday talks with the 5+1 Powers in Geneva to be an important marker in the contest. If they go well, Rouhani will maintain momentum at home. If they do not bring signs of an advance, then the Guards will have more ammunition for their next assault on the President.

Prominent Writer Considers Return to Iran After “the Ahmadinejad Winter”

In the wake of President Rouhani’s election in June and the change in atmosphere inside Iran that accompanied the end of the Ahmadinejad administration some members of the large Iranian diaspora have considered returning to their homeland.

One such person looking to return is the writer and satirist Ebrahim Nabavi, who has outlined his reasons for doing so in a piece for the Guardian.

A writer’s life in Iran is like taking a romantic stroll through a minefield. You might get lucky and make it through unscathed, or you might lose your legs in that first hour.

If you really want to know why this writer wishes to return to a prison where the warden has swallowed the key, to a minefield which may blow up at any moment, the answer is quite simple. My vocation is writing in Persian and I have to work in Iran to be my most useful and effective.

The further away Tehran gets from the Ahmadinejad winter, the longer the days get and the brighter the skies. I am certain that in the next two or three months, the space for free expression will be wider than it is today. I am certain that we will be able to publish our work and create an active cultural, publishing, and media space. But I am not returning with the wish that everything will get better, I am returning to help make sure that it does.

Nabavi’s comments coincide with a move by the Rouhani administration to limit restrictions on internet access, a key factor in maintaining a civil society based on freedom of information and expression.

The Rouhani Government made another push on Tuesday to open up the Internet in Iran.

Culture Minister Ali Jannati declared that “not just Facebook but all social networking websites” should be accessible: “We must reduce the filtering of Internet websites to the minimum and [only based on] necessary positions.”

Jannati’s statement follows reports of a meeting of a regime committee at the weekend to ease restrictions on Facebook pages.

In the summer, the Government followed up President Rouhani’s campaign promise to act on censorship, with all Ministers opening Facebook pages. Both Foreign Minister Mohammad Javad Zarif and Rouhani are prominent on Twitter, and Zarif’s Facebook entries have been a notable front for Iranian public diplomacy and interaction with members of the public.

The Government may have tried briefly to open up the social networking sites in September, only for restrictions to be imposed within 24 hours and declarations that the moment was only a “technical glitch”. Some websites, however, have been opened to access for the first time in years.

Death of a “Moderate Conservative”

A notable loss in Iranian politics on Tuesday, as Habibollah Asgaroladi, the Secretary-General of the Islamic Coalition Party, died at the age of 82.

Asgaroladi was a leading figure in the party, notable for its influence in Iranian business and the bazaar, and in the Islamic Republic since 1979. He was the head of the Imam Khomeini Relief Foundation, the largest charitable organization in Iran; head of the Followers of Imam and Leadership Front; and a member of the Expediency Council.

Earlier this year, Asgaroladi publicly challenged the repression after the disputed 2009 Presidential election. He called for a review of the strict house arrests, imposed in February 2011, of Presidential candidates and opposition leaders Mir Hussein Mousavi and Mehdi Karroubi.

Asgaroladi was close to both the merchant class and the Society for Combatant Clergy. Before the revolution, he spent nearly 13 years in prison for aiding in the assassination of late Prime Minister Hassan Ali Mansur under the Shah.