Iran Round-Up, Oct 12: Support, But Also Some Warnings, For Rouhani & Engagement with US 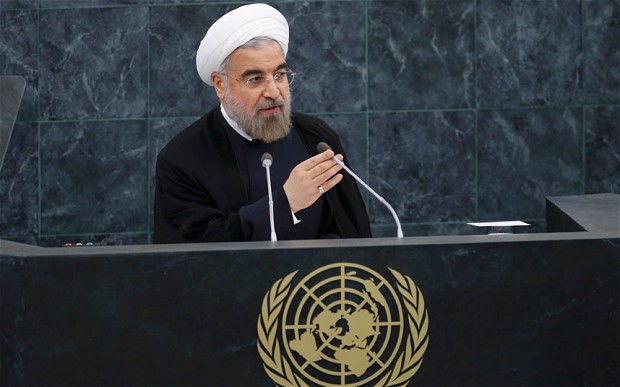 SUMMARY: The Tehran Friday Prayer restated support for Hassan Rouhani’s engagement of the West, with Ayatollah Ahmad Khatami calling for unity behind the Supreme Leader and the President: “Internal strength is the most powerful weapon against the enemy.”

Elsewhere, however, there were reasons for Rouhani to be wary.

Statements from politicians and clerics continued to call for any talks to be from a position of strength — “We must not behave in a way that the Americans feel we seriously need negotiations with them,” said one hard-liner — with declarations such as “Iran will never allow its economic resources to be seized by America or allow America to impose poor influences on its culture and civilization.”

Ayatollah Khatami decorated the assertions with a specific reference to the debate over whether to stop the long-running audience response, “Death to America”:

The ‘Death to America’ chant does not mean death to people who are philosophically opposed to velayat-e faqih [the Iranian system of clerical leadership]….The chant means death to saboteurs, meaning death to the people who attempt to collapse the Islamic system.

However, the most interesting warning came from Mohammad Javad Larijani, a senior official in the judiciary and brother of Speaker of Parliament Ali Larijani.

Mohammad Javad Larijani, in contrast to the support given to Rouhani by his brother, appeared to lash out at the President’s historic phone call with Barack Obama during his trip to the United Nations last month:

Negotiation and establishing relations [between] Obama and Rouhani was a plan that the Zionist regime carried out and Israel sought to show with this move that our President is not supported inside the country and [that] his statements at the United Nations were completely personal.

The IRGC said the five Kurdish troops were slain and two wounded during “a clash with counter-Revolutionary agents” on Thursday near the city of Baneh in the province of Kurdistan.

IRGC officials at Friday’s funerals said “the counter-Revolutionary agents will receive a harsh penalty and a strong and decisive response…in the shortest amount of time”.