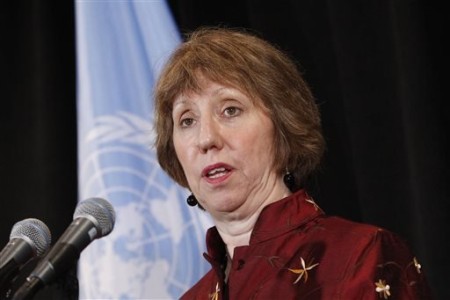 LATEST: Netanyahu — Rouhani Is A Wolf In Sheep’s Clothing

SUMMARY: The European Union’s Catherine Ashton, the lead negotiator for the 5+1 Powers, has implicitly asked the US Congress not to pass more sanctions before talks with Iran on October 15-16 in Geneva.

Ashton, responding to a question of whether additional sanctions should be imposed on Tehran, said, “I am not in the business of telling Congress what to do”; however, she continued:

I want to go to Geneva with that best possible atmosphere.

In any thinking about that, those who are making the law here [in Washington] or those in control of the negotiations from the U.S. end — [Us] Secretary of State John] Kerry and his team — will have to think about how to make sure that it’s the best possible atmosphere.

Ashton reinforced the remarks, “In all sorts of ways, we need to show willingness and good faith to sit down and talk and expect the same in return.”

She said, “It may be, at the end of those two days, that we don’t make progress. But it may be…that we do.”

Rate of Inflation Falls for 1st Time in Months

The Central Bank has announced that the annual inflation rate for August-September was 36%, a 3% fall compared to July-September.

The official inflation rate trebled in the last two years of the Ahmadinejad Government.

Netanyahu: Rouhani Is A Wolf In Sheep’s Clothing

In a speech to the UN on Tuesday, Israeli Prime Minister Binyamin Netanyahu said that Iranian President Hassan Rouhani is a “wolf in sheep’s clothing”.

Netanyahu starts by talking about the Jewish people’s “odyssey through time”, saying that the Jews have learned two things: never give up hope and

The Israeli Prime Minister said, “Today our hope for the future is challenged by a nuclear Iran that seeks our destruction.”

Netanyahu then returns to his history lecture, talking about the “Persian decree” from Cyrus the Great that allowed the Jewish people return to Eretz Israel and rebuild the
Temple.

“But in 1979, a radical regime in Iran changed all that, crushing the Iranian people’s hope for democracy and chanting ‘Death to the Jews’,” Netanyayu said.

Netanyahu went on to say, “Since then there have been different Iranian presidents but the creed has been the same — espoused by the real power in Iran, the dictator, the Supreme Leader.”

Netanyahu now refers too Rouhani, asking, “What made Rouhani acceptable?” in the Iranian Presidential elections.

Netanyahu called Rouhani a wolf in sheep’s clothing — saying that there has been an extraordinary and startling contradiction between his words and Iranian reality: “Rouhani stood here in the UN and praised Iranian democracy, but Iran executes dissidents. Rouhani talks about the crisis in Syria but Iran directly participates in that massacre — Iran props up the regime that used chemical weapons against its own people.”

The Israeli Prime Minister says, “I wish I could be moved by Rouhani’s call to join his “wave” but the only wave that Iran has created in the last 30 years is a wave of violence and terrorism. I wish I could believe Rouhani but I don’t.”

He answers his own question, “The answer is simple — Iran is developing nuclear weapons.”

“Rouhani was elected because of sanctions, and that is why he launched a charm offensive to get them lifted — but he does not want to stop Iran’s nuclear program. He pays lip service to peace and democracy and offers meaningless concessions in return for lifting sanctions and wants Iran to keep sufficient nuclear infrastructure to race to the bomb….Why does Rouhani think he can get away with this? Because he has gotten away with it before — his strategy of talking a lot has worked in the past. He even brags about it.”

Netanyahu now talks about the Isfahan nuclear facility, saying that Rouhani boasted of creating a calm environment that allowed Iran to build this facility.

The Prime Minister quips, “Rouhani thinks he can have his yellowcake and eat it.”

Netanyahu now talks about North Korea and says Iran would be “50 times worse”.

“Iran’s fanaticism is not bluster, it is real. This fanatic regime must never be allowed to arm itself with a nuclear weapon. We know all too well the costs, history has taught us that if you want to prevent war tomorrow you must act today,” he continues, asking: “Can diplomacy solve the problem by dismantling Iran’s nuclear program? It would require Iran to do four things: cease all uranium enrichment, remove all enriched uranium, get rid of its nuclear facilities and stop all work on its heavy water reactor. These steps would put an end to Iran’s nuclear program.”

The Israeli Prime Minister now warns that a reduction of the sanctions would not work.

“There are those who would agree to leave Iran with the residual capacity to have a nuclear program. But a country with a capacity to enrich uranium to 3% can also enrich it to 90% and create nuclear program. This is why Iran’s nuclear weapons program must be fully dismantled.”

Netanyahu warns, “Don’t agree to a partial deal, which would lift international sanctions, in return for symbolic concessions that would take Iran weeks to reverse. Only lift the sanctions when Iran agrees to dismantle its nuclear weapons program completely.”

“Israel will never acquiesce to nuclear weapons in the arms of a rogue regime. In the face of this threat Israel will defend itself. If Israel is forced to stand alone, Israel will stand alone. And in standing alone Israel will know that it is defending many, many others.”

A statement expressing support for the stance taken by President Rouhani during his visit to the United Nations in New York has been signed by two hundred and thirty MPs.

The statement praised Rouhani for presenting Iran as a powerful and peace-loving country.

It also expressed the hope that the sanctions against Tehran would be lifted.

Foreign Minister Mohammad Javad Zarif, on the sidelines of meetings at the United Nations, has invited the head of the UN Human Rights Commission to New York.

Zarif’s invitation to Navi Pillay is a marked change from the Ahmadinejad Government. It repeatedly blocked access to Iran by Ahmad Shaheed, the UN Special Rapporteur for Human Rights.

A hardline group that claimed responsibility for the protests against President Rouhani on his return from speaking at the United Nations in New York has launched a website for its new “Committee for Protecting Iranian Rights.”

Upon returning to Tehran Rouhani was greeted by a few hundred supporters and a smaller group of opponents who threw eggs and shoes at his motorcade. The “extremist elements,” as the conservative paper Asr-e Iran termed them, objected to the US-Iranian rapprochement signalled by Rouhani’s telephone conversation with US President Obama.

Principlist MP Ali Motahari has backed President Rouhani’s “engagement” with the United States, declaring that it is in line with the “heroic flexibility” recently outlined by the Supreme Leader.

The President is the people’s choice and, in his own words, has much discretion.

When the Supreme Leader introduced the heroic flexibility discussion, this was a permission in itself, meaning he has opened the road and there is no longer a need for Rouhani to seek permission for every single detail.

He also injected a note of caution, saying “The American President has demonstrated noticeable flexibility in his recent statements and had a reconciliatory tone. We changed our tone to that extent and so far nothing special has occurred.”

FM Zarif to Obama “Don’t Be Disrespectful and Macho”

Foreign Minister Mohammad Javad Zarif has chided Barack Obama via Twitter, telling the Preisdent to avoid claims that Iran is negotiating from weakness in the face of US sanctions:

Pres.Obama's presumption that Iran is negotiating because of his illegal threats and sanctions is disrespectful of a nation,macho and wrong.

Assessing the Opposition to Obama’s Engagement with Iran

Radio Farda — with contributions from EA’s Scott Lucas — has posted an analysis of the opposition to President Obama’s engagement with Iran, including from the US Congress and from Israeli Prime Minister Benjamin Netanyahu.

See the article (in Persian)

The assessment is that, so far, the challenge from Congressional opponents of engagement has been limited by the momentum from President Rouhani’s visit to the US and an apparent change of startegy by the Obama Administration.

I downplayed the prospect of opposition from the Gulf States, including Saudi Arabia, with Tehran trying to pursue rapprochement. As for Israel, we will be watching Prime Minister Benjamin Netanyahu’s speech at the United Nations on Tuesday and any follow-up.

Esmail Kowsari, a leading member of Parliament’s National Security Commission and a former Revolutionary Guards commander, has reinforced the message put out by Guards head Mohammad Ali Jafari a year ago: Iran is training forces fighting for Syrian President Assad:

Syria’s support in the Sacred Defense era [1980s Iran-Iraq War] was when Iranian soldiers went to Syria in [1983-1984] and received missile training. They provided ammunition and equipment and now it is our turn to help them, and our help is not hidden at all….

We cannot abandon Syria in such circumstances and we must transfer our experiences to the officials and people of Syria.

For two and a half years, we have spiritually supported Syria, but have not provided material support. Spiritual support means that we transfer our experience and tell them, “Because we succeeded, if you do the same, you will succeed.”

We have stated an example, “Train and organize popular forces alongside the army and use them in a way that can aid you.” …Beginning 7-8 months ago [after doing this] ,they successively experienced their best successes.

Jafari said in September 2012 that Iran would help train 50,000 members of People’s Defense Army in Syria. Last month, the Iranian training was shown on film for the first time, after a Guards veteran and a cameraman making a documentary in Syria were killed in an ambush by insurgents.