Iran Spotlight: Getting Rid Of “Death to America” 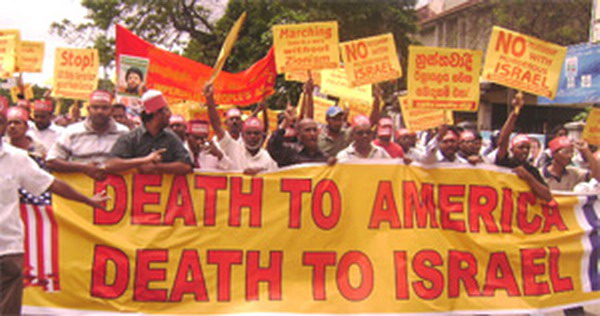 A perennial thorn in the side of US-Iranian relations for the past thirty-four years — at least from an American perspective — has been the image of Iranian demonstrators chanting “Death to America” and spitting (or worse) on the Stars-and-Stripes.

For ordinary Americans, this has all too often been central to their prevailing perception of Iran, ever since images of the Islamic Revolution and the Tehran Embassy hostage crisis were broadcast nightly into their living rooms. Today, these images are still peddled by those on the right who want to construct an anti-Iranian discourse in US political circles.

Since the June presidential election and — more specifically — President Rouhani’s historic 15-minute telephone conversation with President Obama during his visit to the United Nations, a thaw in US-Iranian relations appears to have set in. One affect of this has been a renewal of the debate inside Iran about the proper role of the controversial “Death to America” slogan.

Following the Rouhani-Obama telephone call, former President — and prominent Rouhani supporter — Hashemi Rafsanjani suggested that the chant should be retired, claiming that even Ayatollah Ruhollah Khomeini, the first Supreme Leader, had opposed it.

Given the emotive responses engendered by the slogan, it is little wonder that the prospect of a serious debate about its use has attracted the attention of Iranian and Western Iran-watchers.

Rafsanjani’s suggestion that the slogan be dropped was — unsurprisingly — virulently criticised by those who most strongly oppose the present US-Iranian “engagement” or, to put it mildly, are sceptical of Washington’s intentions.

Mohammad Esmail Kowsari, a member of the National Security and Foreign Policy Parliamentary Commission and former Revolutionary Guards Commander, called the claims “hearsay” and “an unacceptable and mistaken act in current circumstances.”

Mohammad Dehghan, an MP and member of the Parliamentary Executive Board, urged Iranians to remember that Tehran’s hostility towards the United States is not based on “political preferences,” but “due to its belief in Islam, it has recognized America as the history’s greatest criminal and has not considered it a friend.”

Tehran MP Bijan Noubaveh declared that “Whenever we can eliminate ‘I seek refuge in God from the accursed Devil’ (a common expression recited before reading the Quran), we can also think of eliminating ‘Death to America.'”

In other words, not any time soon.

Yet, while Kowsari, Dehghan, and Noubaveh resolutely tried to close off further debate, other prominent figures have been more willing to embrace a discussion about the slogan’s continued use.

Even as he acknowledged that “the slogan must be chanted,” Head of the Presidential Cultural Council Hojjat al-Eslam Said Reza Akrami suggested that “each time there is an agreement produced based on the interests and mutual respect between Iran and America, we will review the Death to America slogan.”

Perhaps the most interesting development though, is how the rhetoric of some within the Islamic Republic has changed since the debate began.

The day after Rafsanjani made his remarks, Hojjat al-Eslam Ali Saeedi — the Supreme Leader’s Representative in the IRGC — dismissed the former President’s comments, stating that “The Imam’s (Ayatollah Khomeini’s) outlook is the same outlook as the Supreme Leader today. Differences with the United States have been ethical and historical, and the roots of these outlooks will remain until the end of time.”

Just seven days later Ali Saeedi took a slightly different line. Rather than reiterating that “the roots of these outlooks will remain until the end of time,” he asked “whether eliminating the ‘death to America’ chant is part of the fixed or changing principles.”

“Eliminating the ‘death to America’ chant is part of the changing principles. The change of tactics and methods can only take shape at the hands of the Supreme Leader of the time.”

Ali Saeedi is not necessarily suggesting that the current Supreme Leader, Ayatollah Khamenei, is looking to place a moratorium on the “Death to America” slogan but his words imply that a ban could take place — if Khamenei wanted one.

On October 3rd Ayatollah Ahmad Khatami, a well-known hardline member of the Expediency Discernment Council and Assembly of Experts, weighed-in to the debate against Rafsanjani. Referring to the former President’s comments, Khatami said “There are rumors that some have said to abandon the death to America slogan, but they must know that the death to America slogan is the slogan of Iran’s resistance.”

However, during Friday Prayers on October 11th Khatami made a more nuanced intervention, explaining:

The ‘Death to America’ chant does not mean death to people who are philosophically opposed to velayat-e faqih [the Iranian system of clerical leadership]….The chant means death to saboteurs, meaning death to the people who attempt to collapse the Islamic system.

This is a more subtle interpretation of the slogan than one sometimes hears, reassuring as it does that it is aimed not at ordinary Americans — or even America itself — but against those who seek to undermine the Islamic Republic. For Tehran during the last 34 years, this has of course meant the United States Government.

The implication of Khatami’s comment is that, if Washington suspended its efforts to “collapse the Islamic system,” then there would be no need for Iranians to chant “Death to America.” In light of the emerging rapprochement between the US and Iran, Rouhani’s policy of “engagement” and Obama’s reciprocity, such a development appears more possible now than previously.

The key point is that for the moment at least there seems to be space within Iran to have this discussion over the controversial slogan’s continued use. Moreover, the Supreme Leader is allowing it, as evidenced by the apparently softening views of Khatami and Ali Saeedi, which were presumably guided by Khamenei’s instruction.

The question is — as it was with the release of political prisoners a few weeks ago and the president’s backing of greater freedoms of expression for academics and students on Monday — how long this will last, particularly if Rouhani’s engagement with the US does not result in any tangible benefits.

The real test will be November 4th (13 Aban), which marks the anniversary of the American Embassy siege of 1979. If, as one conservative MP declared recently, “the people… chant ‘death to America’ so loud that the foundation of the White House will shake” then we might just have an answer.