Syria Feature: Why Chechen Militants Broke Away From The Islamic State Of Iraq & Ash Sham 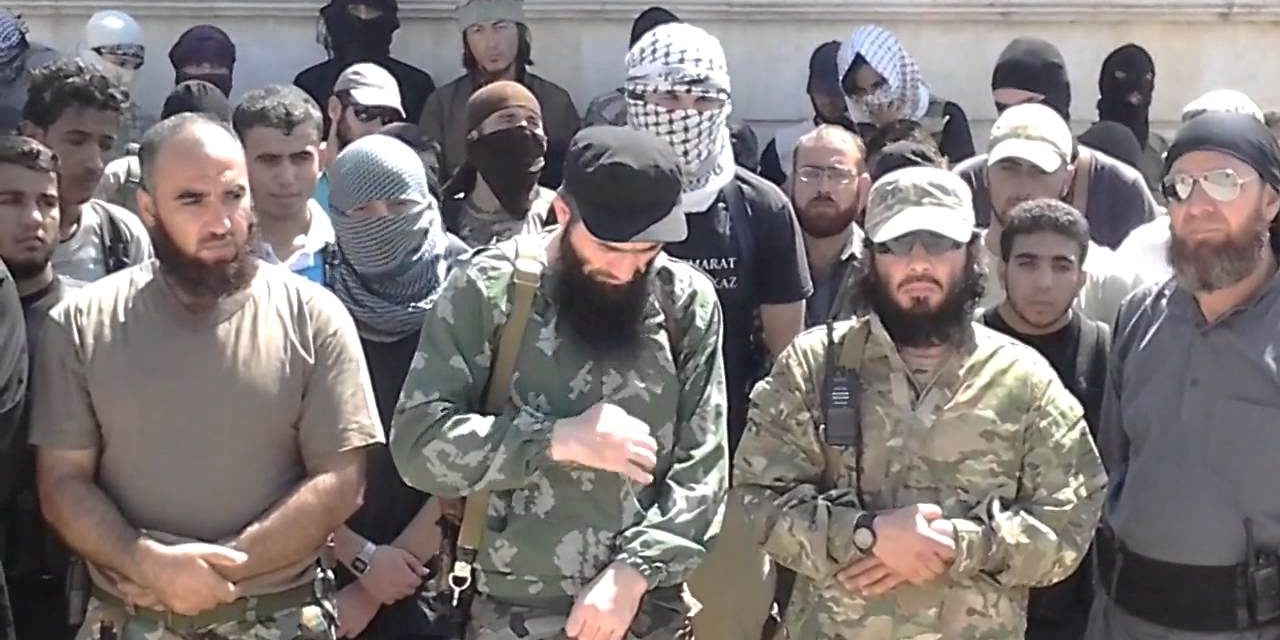 Fehim Taştekin, an analyst specializing in Turkish foreign policy and Caucasus, Middle East and EU affairs and founding editor of Agency Caucasus, explores why Chechen militants are fighting in Syria.

He notes that while the largest group of Chechen militants — the Jaish al-Muhajireen wal-Ansar or Army of Emigrants and Helpers, led by Abu Umar Al Shishani — has cooperated with the Islamic State of Iraq and Ash Sham, it has not sworn allegiance to ISIS and has been trying to find a way to break with ISIS for some time.

The piece goes some way to explain a recent video statement by the second-in-command of the Jaish al-Muhajireen wal-Ansar, the Caucasian militant Seyfullakh, who announces that he has formed a new brigade independent of ISIS and Jabhat Al Nusra.

The report also explains one reason why Moscow is concerned about “foreign fighters” in Syria, and their connection to “Al Qaeda-linked groups”.

Tastekin begins by asking why Chechens — who for centuries have fought a single enemy, the Russians — are joining the “global jihad” and turning up on the battlefield in Syria, when it has been generally accepted that unlike groups such as the Islamic State of Iraq, Chechen fighters are not motivated by a Salafist Jihadist ideology, but a Sufist ideology specific to the Caucasus.

According to Tastekin, the new phenomenon of Chechen militants joining the jihad in Syria is related to changes in the Chechen resistance that occurred during the Second Chechen War in 1999.

The Caucasus Emirate, proclaimed in 2006 by Doku Umarov, initially transferred the war in Chechnya to other Caucasian republics. The struggle of Chechens turned into a multinational design, involving the participation of militants from different ethnic groups such as the Circassians, Karachays, Balkars, Ossetians, Nogais, Dargins, Lezgins, and Avars.

Eventually, the struggle left the borders of the Caucasus. Now this diversity is reflected on the Syrian front. Syria emerges as an important step in the integration of Caucasian militants into the global jihad.

Caucasian fighters in Syria soon found themselves at the forefront of the insurgency, with the Khattab Brigade formed by Abu Umar Al Shishani [the brigade eventually formed into the Jaish al-Muhajireen wal-Ansar, or Army of Emigrants and Helpers].

According to Taştekin, Al Shishani is a Kistininan [Kisty is an Georgian name for local Chechens] and like the Chechens living in the Pankisi Gorge in Georgia, speak a language from the Vainakh language group. The name of the Khattab Brigade comes from the Jordanian militant Emir Khattab — also known as Habib Abdul Rahman — who worked with Chechen mujahideen in the First and Second Chechen Wars after fighting the Soviets in Afghanistan. Khattab’s Salafist ideology had some influence on Caucasian militants fighting in Chechnya.

The Khattab Brigade — which later formed the Jaish al-Muhajireen wal-Ansar — fought in and around Aleppo with both the Free Syrian Army and Islamist faction the Islamic State of Iraq and Ash-Sham but according to Taştekin avoided swearing any oath to ISIS leaders.

Most of the group’s fighters have origins in the Caucasus, though it is not known how many are Chechen diaspora who settled in Syria in the 19th century.

What attracts Caucasian militants to Syria? Tastekin says the main reason is a sense of solidarity with global jihad, including the idea of creating an Islamic State. However, there are some unique reasons why Chechen militants are coming to Syria to wage jihad:

One main factor attracting Caucasians to fight in Syria is Moscow’s support for Syria and the Assad regime.

For many Caucasians, therefore, the war in Syria is a continuation of the war in Chechnya.

Some of the fighters are wanted by Russian security forces back home in the Caucasus, and see Syria as an escape route from the police and the security services.

Yet others are Caucasian refugees who had a hard time in Turkey, and came to Syria, some of them with their families.

One Caucasian, “Mohammad”, who is close to Chechen militants in Syria said:

“There were those who lived illegally in Istanbul for around five years, and for them Syria was the best way out. Chechen refugees, and about 50 or 60 people of Circassian origin, all members of the “Caucasus Emirate”, went to Syria. They settled in the liberated areas of Syria with their families since they couldn’t go back to Istanbul. They also couldn’t return to the Caucasus. In Syria, they have no need of a passport or to pay any rent. Security officials also don’t pursue them.”

“Mohammad” said that while Al Shishani does operate with the Islamic State of Iraq, he is trying to move away from its leader, Abu Bakr Al Baghdadi.

Why? “Mohammad” said that Al Shishani believes that ISIS “have no respect for the language and culture. They enforce stringent rules for everything. In addition, they’ve looted factories . For example, they took a huge flour plant, delivered its equipment to Turkey and sold it…** The issue of declaring an Emirate has also led to protests in the ranks of the Jaish al-Muhajireen wal-Ansar. All those who are fed up with the actions of ISIS join Al Shishani . The number of militants in the Jaish al-Muhajireen wal-Ansar is 1.5 – 1.7 thousand people. Those who leave Al Baghdadi don’t go over to the Free Syrian Army, as it is secular in nature and it has no ideology. And there are only a few Caucasians in Jabhat Al Nusra.”

** Taştekin says that, in fact, it was Al Shishani who sold the flour plant’s equipment.

[Note — the original piece is in Turkish, but was translated into Russian for the Kavkaz Press site. This English translation is taken from the Russian version.]