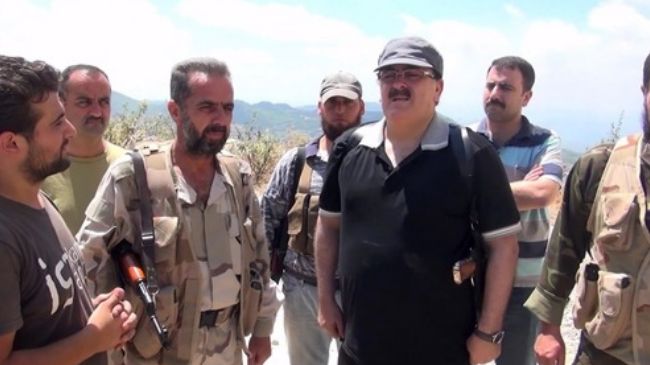 The Syrian National Coalition on Thursday released a transcript of a Tuesday press conference in which it said that the US administration has “increased its support of the Opposition and of the Supreme Military Council (SMC)”.

The press conference also gave more details of the SMC’s processes for vetting which Free Syrian Army units may join its ranks and receive lethal and non-lethal support, the Coalition’s and SMC’s opinions about a US military strike, and on the future of Syria including in a possible post-Assad scenario.

US Support For The Opposition and Supreme Military Council

Najib Ghadbian, the Syrian Coalition Special Representative to the United States and United Nations, told reporters in Washington, D.C. that:

I think they [the Obama Administration] are focusing on two tracks. One is dealing with the chemical weapons side, and they are trying to make this related to the latest use of chemical weapons, and punish those who carried out those, and establish deterrence for future use. The other one, which in fact many of them have announced that they will continue to support the Opposition, the SMC, in order to achieve the larger objective which is political settlement and democratic transition in Syria. So I think we should expect more support on that front as well.


Ghadbian said of the relationship between the Obama Administration and the SMC:

[We] are in touch with the administration. They are, in fact, in daily touch with us. Secretary Kerry is talking to the President of the Coalition almost, I would say, on a daily basis to coordinate efforts.


Who Are The Syrian National Council And The Supreme Military Council?

Farah Attasi of the Coalition explained the difference between the political and military Opposition forces:

The political [Opposition Force}….the Syrian National Coalition is a group of different Syrian forces united together behind one goal; end of dictatorship and end of tyranny. We want freedom. We want justice.

This group consists of different opposition forces inside and outside Syria, and we are here to represent them. We are here to answer any questions you may have about these political leaders that they are fighting Assad regime.


Regarding the SMC, Attasi added:

In the Free Syrian Army are Syrian defected officers….who defected from the Syrian regime and refused to point their weapons against their own people. And they decided to join the Syrian forces against Bashar al Assad.

So some of them are civilians. Some of them are military leaders like, for instance, General Salim Idris- he holds PhD in Engineering. He is educated person; highly refined person. All the Free Syrian Army, was formed in December of 2012- they did not violate any Geneva norms or accords, you know the Geneva Convention accords.

Khalid Saleh of the Coalition’s Media Office said of the SMC:

The SMC controls over 100,000 fighting soldiers on the ground. It is under the leadership of General Salim Idriss. We have made it clear that a U.S. action in Syria, as well as increased support to the SMC, will strengthen our ability to repel the Assad regime from using chemical weapons in the future.


Which FSA Units Receive Lethal and Non-Lethal Aid From The SMC?

While Ghadbian refused to say what support had been provided by foreign actors, Saleh did answer a question about what processes the SMC was using to determine which insurgent units received lethal or non-lethal aid:

One of the concerns of the international community is ensuring that the weapons- lethal or non-lethal aid does not fall into the wrong hands. And this is also a concern that is shared by the Syrian Coalition.

Saleh said that every Free Syrian Army brigade that joins the SMC “must meet certain conditions”.

When the SMC was first started, there was 564 brigades that actually joined. Since then, there are more brigades that are joining…One of the things that these brigades must sign on first- they must agree and abide by the by-laws and constitution of the SMC. Some of the other things they must agree for regular monitoring and audits that are conducted by the SMC and some of the partner countries as well to ensure how the aid, whether lethal and non-lethal, is used.


Saleh said that the SMC also ensured that those FSA brigades that join cannot include fighters under the age of 18, or foreign fighters.

The U.S. is using- is contributing non-lethal aid, and as we confirmed some lethal assistance as well to the SMC because they are sure that the mechanisms that the SMC has established are well-tested, and they will ensure that weapons are not- are not falling to the wrong hands.


Is The SMC Fracturing, Or Is It United?

Saleh said that the SMC was growing and that it is increasingly coordinated across Syria, which has led to better fighting and more victories for the FSA:

[When] the SMC was established, it had 564 brigades amongst its ranks. Since then, more brigades have joined the SMC. It actually had grown in numbers.

More brigades are finding the need to coordinate very closely with the SMC and join the ranks of the SMC. This also points to a very important step- when we have been asking the international community, any country that want to support the Revolutionary forces on the ground, they must use the SMC as the credible channel; a channel that the Syrian Coalition stands behind. I think this is something that we are- we are seeing in the last few months

[Insurgents] are finding that the SMC has professional military leadership. They are able to do much better military planning than each of the brigades fighting on its own trying to do the planning.

Now you have coordinated operations running in different provinces, and this is something we did not have previously. Although Assad used chemical weapons on August 21, if you look at the 30 days prior to his use of chemical weapons, the SMC and the FSA fighting brigades on the ground were able to achieve 63 strategic victories all across Syria.


Does The SMC Support A Political Solution To The Crisis?

[That] position evolved. Early on, before the regime committed atrocities [on a] mass scale. [Early on, we] appealed to Bashar al Assad […] in the first few weeks of the Revolution to take serious reformist step to bring Syria into a democratic kind of conclusion.

But, you know, the regime was using lethal weapons- using live ammunition from day one in Dera’a

And so immediately […] it was obvious that [the regime] did not believe in a political solution. Assad, up to the use of chemical weapons, he communicated to us […] that he can achieve a military victory, and he is working toward that end.

How Would The SMC/ Coalition View A Post-Assad Scenario? What About The Alawite Minority?

Syria is a diverse country [with] several ethnic and religious groups, and […] a majority of Syrians from all backgrounds that want change in Syria.

The Kurdish Movement has been […] affiliated and supported the Opposition. They have been in the opposition for long time. They do share the objectives of the Syrian Coalition and before that the Syrian National Council of a finding a solution for the Kurdish problem within a unified Syria. That is they get all the rights they were, in fact, deprived of under the Assad regime. And so that is a majority position among the Kurds.

Some element[s] within the Kurdish Movement [are] still affiliated with the regime. Those are the Syrian PKK side and they clash […] with the FSA in some areas. But we believe that the Kurdish question can be solved again within Syria.

[Regarding] the Alawites, they are definitely Syrians. They have all the rights of Syrians.

[Any] political solution for Syria must include a transitional justice element in which nobody [is] be held accountable because of their affiliation. Only those who committed crimes against the Syrian people […] should be held accountable whether they are Sunnis, Christians, Alawites, whatever background they have.

[Within] the Coalition and SMC, we are pursuing plans to protect Syrian civilians of all backgrounds; especially those who might be targeted. This is a difference between our position and the other side.Assad does not see in those who oppose him humans. If you listen to his interview last night, “they are all extremists”.

Charlie Rose, you know, pressed him: “do you think they are all extremists, they are all terrorists?” He said yes, they are all. No, we do not see it that way. We feel so sorry when a Syrian is killed whether from the other side or from our side. I think that kind of high moral ground is what distinguishes us from the other side. So we want to create, again, a state that is, in fact, for all of its citizens.