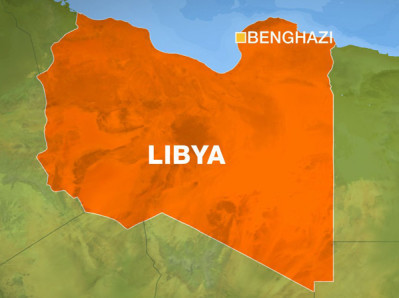 LATEST: Egypt — At Least 3 Killed By Car Bome in Sinai

SUMMARY: ibya’s Foreign Ministry building has been damaged in an explosion in the city of Benghazi early Wednesday.

An eyewitness said he saw no casualties, which occurred about 7 a.m. local time, an hour before streets fill with residents going to work and school.

A year ago today, a crowd attacked the US Consulate in Benghazi, killing four Americans including US Ambassador to Libya Christopher Stevens.

In January, gunmen targeted the car of the Italian consul general in Benghazi, but no one was injured. Bomb attacks also occurred last year on a United Nations convoy and a convoy escorting the British ambassador.

Egypt: At Least 3 Killed By Car Bome in Sinai

At least three people have been killed and more than 10 wounded by a car bomb at an intelligence facility in Rafah in Egypt’s Sinai Peninsula.

The bomber drove at high speed into the one-story building, collapsing the front and burying an unspecified number of troops under the rubble, according to two security officials.

Simultaneously, militants fired rocket propelled grenades at an army checkpoint not far from the building, the officials added.

Attacks in the Sinai by Islamists have escalated since the July 3 coup that deposed President Mohamed Morsi.

Last week, an Islamist group claimed credit for a Cairo bombing that targeted the Minister of Interior.

The Egyptian military subsequently moved into the Peninsula, killing at least 20 insurgents.