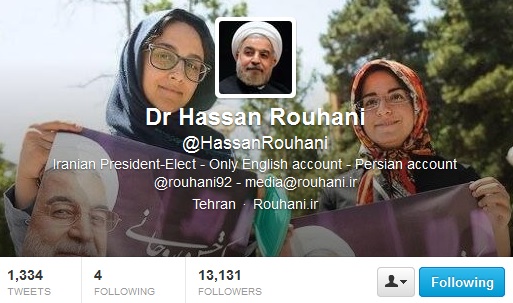 SUMMARY: The internal conflict within Iran’s regime over Syria appeared to ease on Sunday, as former President Hashemi Rafsanjani pulled back his controversial declaration that the Assad regime had used chemical weapons.

However, tension was not far away, even as Foreign Minister Mohammad Javad Zarif was criticising US military intervention during talks in Iraq.

One of the latest catalysts is the use of social media by President Rouhani and Zarif, with both men sending greetings to “all Jews” for Rosh Hashanah and Zarif criticising former President Ahmadinejad’s denial of the Holocaust.

On Sunday, Hossein Shariatmadari, the editor of the hard-line Keyhan, wrote, “Given Zarif’s status as the minister of foreign affairs and his deep knowledge of diplomacy, what we witnessed in these tweets was strange and unexpected.”

Fars — the outlet of the Revolutionary Guards — put out a warning with a quote from Abdol­samad Khoramabadi, the secretary of a task force studying the legality of Iranians’ online activity:

Our office will soon study the content of pages of some ministers on various social networks like Facebook. Some people have said that there is criminal content posted in such pages, which we have to study in our office and then give our assessment.

Meanwhile, the Rouhani Government has pressed ahead with its social media strategy — each Minister in the Cabinet has opened a Facebook page.

Press TV claims that Foreign Minister Mohammad Javad Zarif, speaking with an Iraqi official in Baghdad, has returned to hard-line rhetoric on Syria, “There is ample intelligence that Takfiri groups are in possession of chemical arms. Extremists and Takfiris are a threat to the whole region.”

Zarif then supposedly turned on the US and its allies, “We cannot accept that a group, who were indifferent to the use of chemical weapons in Iran and Iraq by Saddam [Hussein], today consider themselves responsible for determining who has used chemical weapons.”

The World Economic Forum’s latest report on inflation puts Iran atop the 148 countries listed, with an annual rate of 30.6% in 2012.

On Sunday, the Central Bank said the official inflation rate reached 39% in July-August, a jump of 5% from the previous month. 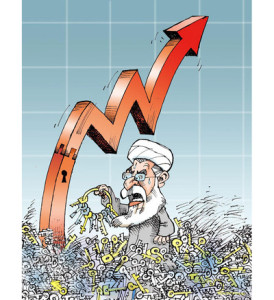 Iran’s Foreign Ministry may be denying the claim of an unnamed US official of Tehran’s order for “revenge” attacks in Iraq if Washington carries out airstrikes on Syria; however, Fars News — linked to the Revolutionary Guards — is happy to publish lurid threats from an Iraqi group.

The outlet claims an interview with the leader of Jaysh Al-Mukhtar, Sheikh Wathiq al-Battat, who vowed suicide attacks: “[We have] 23,000 fully-trained and equipped martyrdom-seeking forces who can blow the US interests in Iraq and the Persian Gulf at any time if the US commits such a stupid act.”

Meanwhile, the deputy head of armed forces, General Massoud Jazayeri, warned, “There are signs indicating that Syria will attack the interests of the US and its allies to preserve its national interests if it comes under the West’s attack….The international community entitles Syria to the right to confront the enemies and aggressors in self-defense.”