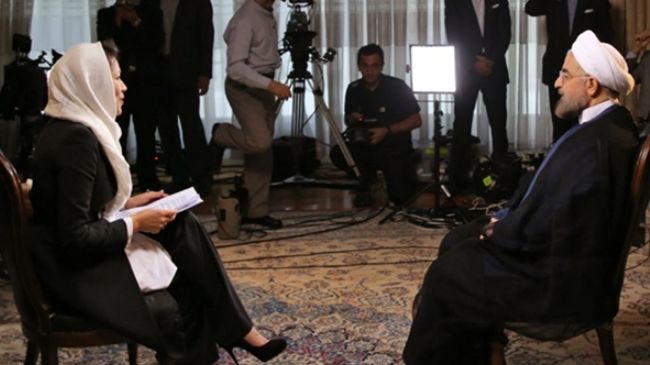 LATEST: Why “Moderation” and Talks with US? “It’s the Economy, Stupid”

SUMMARY: The manoeuvring via public relations over nuclear talks escalated on Wednesday, with President Rouhani giving an interview to an American TV channel and both Washington and Tehran confirming Rouhani’s exchange of letters with Barack Obama opening up discussions on the issue.

Rouhani, telling NBC News that Iran will never develop nuclear weapons, said he can reach an agreement: “In its nuclear program, this government enters with full power and has complete authority….We have sufficient political latitude to solve this problem.”

Rouhani put the challenge to the US and its allies, “The problem won’t be from our side.”

The President referred to a letter from Obama, soon after Rouhani’s election in June, and his reply: “From my point of view, the tone of the letter was positive and constructive.”

He continued, “It could be subtle and tiny steps for a very important future. I believe the leaders in all countries could think in their national interest and they should not be under the influence of pressure groups. I hope to witness such an atmosphere in the future.”

The White House effectively supported Rouhani in a press conference, with spokesman Jay Carney confirming Obama told Rouhani the US is open to a resolution to the nuclear issue in which Iran proves its program is peaceful — although he added that the window for a deal “will not remain open indefinitely”.

Rouhani signalled in his interview, “We have never pursued or sought a nuclear bomb, and we are not going to do so,” he said. “We solely are looking for peaceful nuclear technology.”

Why “Moderation” and Talks with US? “It’s the Economy, Stupid”

A telling quote in a New York Times report on the Rouhani Government’s campaign for moderation and engagement — and why it might succeed — updating the famous “It’s The Economy, Stupid” analysis of an advisor to Bill Clinton in 1992:

“We are now at a unique moment in the Islamic republic’s history,” said Farshad Ghorbanpour, a political analyst close to Mr. Rouhani. “Economic reasons are now justifying political reasons to talk to the U.S.”

And another extract, pointing to the significance of media — both “traditional” and “new” — in the contest:

In a near staccato burst of pronouncements, statements and speeches by the new president, Hassan Rouhani; his foreign minister, Mohammad Javad Zarif; and even the supreme leader, Ayatollah Ali Khamenei, the leadership has sent Rosh Hashana greetings to Jews worldwide via Twitter, released political prisoners, exchanged letters with President Obama, praised “flexibility” in negotiations and transferred responsibility for nuclear negotiations from the conservatives in the military to the Foreign Ministry.

“They’re putting stuff out faster than the naysayers can keep up,” said Gary Sick, an Iran expert with Columbia University. “They dominate the airwaves.”

Amid this week’s flutters over Internet censorship — with the regime briefly lifting restrictions on Twitter and Facebook and unblocking some websites — Iran’s police chief Esmail Ahamadi Moghaddam offers a “clarification”: the use of filtered social networks is “illegal”, but is allowed if it serves the nezam [system].

More on Release of Political Prisoners…And What May Happen Next

In a separate special, we profile Wednesday’s sudden release of 16 political prisoners and ask, “Will the President — can the President — release Mir Hossein Mousavi and Mehdi Karroubi, the Presidential candidates who have been under strict house arrest since February 2011?”

#Iran lawyer Nasrin #Sotoudeh. On her scarf: "I shall greet the sun again". Photo: Kaveh Rostamkhani via @pedestrian pic.twitter.com/XMR2D2St3m

And a tantalizing retweet from Rouhani’s office sharing the happiness:

And another name of a freed detainee: Ali Khodabakhsh, financier of several reformist newspapers.