Syria, August 24: Will the US Take Military Action? 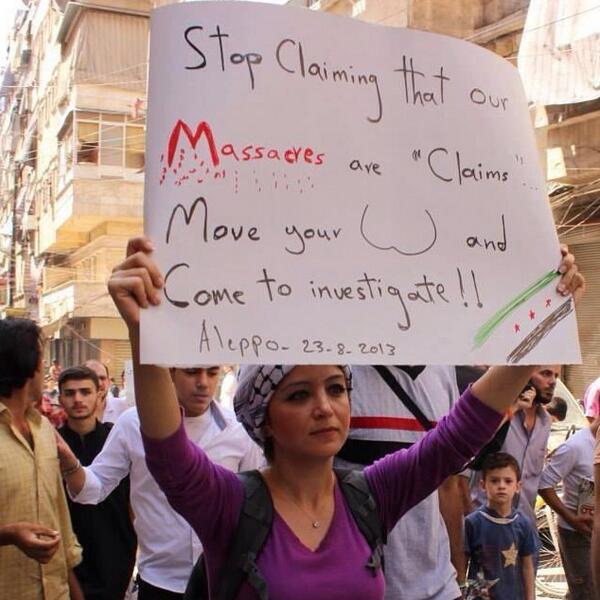 We began Friday with the observation that the Obama Administration was “sitting on its hands” over Wednesday’s regime attacks near Damascus, including with chemical weapons, that killed at least 1,360 people. Obama reinforced that with his first statement on the event, telling CNN:

Sometimes what we’ve seen is that folks will call for immediate action, jumping into stuff, that does not turn out well, gets us mired in very difficult situations, can result in us being drawn into very expensive, difficult, costly interventions that actually breed more resentment in the region.

See Syria Analysis: Is Obama Ruling Out US Intervention — or Covering for a Possible Airstrike?

However, some US officials told a contrasting story to the Wall Street Journal that contingency planning was under way for US airstrikes, including updates of target lists in Syria with government and military installations. Reuters was also told that options were being considered, such as cruise missile attacks from the sea.

Later Friday, another signal from officials: CBS News reported that US intelligence services had “detected activity” at Syrian chemical weapons sites before Wednesday’s attack, although at the time they believed it was just movement of stocks.

The significance of that leak is that it establishes a cause for US action, even if the use of chemical weapons by the Assad regime cannot be established because of a lack of access to the attack sites.

On Saturday, we get another signal: a defense official has said that the U.S Navy will expand its presence in the Mediterranean with a fourth warship, the USS Mahan from the U.S. Sixth Fleet, armed with cruise missiles.

So are all these signals just expressions of discontent from officials unhappy with the lack of American response? Are they just expressions of possibility, while not pointing to any decision for action? Or could the Obama Administration, behind its public declaration of caution and non-intervention, be preparing for its first significant public military operation since the Syrian conflict began?

(Featured Photo: A Demonstrator in Aleppo on Friday)

In a video with the Islamic State of Iraq and as-Sham logo, a fighter executes three Alawite truck drivers.

The drivers — at least one of whom is from Tartous in western Syria — are quizzed about their prayer rituals, in an attempt to ascertain their faith. When they “fail” the test, indicating they are Alawite, they are taken to the median and shot in the back repeatedly.

(Warning: Very Graphic — The execution is just after the 8-minute mark)

Several videos showing the Free Syrian Army’s Al-Fajr Brigade, who are based in Muadamiyeh As-Sham, the site of one of the chemical weapons attacks on Wednesday:

This video introduces the brigade, who are local men:

Other footage shows graphic images of a civilian badly injured after a regime mortar shell hit the town.

The opposition Syrian National Coalition has hit back at regime propaganda — see below — that insurgents have used chemical weapons.

“The National Coalition totally rejects the lies from the Assad regime and considers them a desperate bid to divert attention from its repeated crimes and methods against Syrian civilians,” the opposition said. “[The] international community knows full well that the Assad regime is the only party in Syria which possesses the means to produce, use and stock chemical weapons.”

International medical aid NGO Médecins Sans Frontières (Doctors Without Borders) said Saturday that three hospitals it supports in Damascus Province have reported receiving around 3,600 patients with neurotoxic symptoms in less than three hours on the morning of Wednesday, August 21, 2013. MSF said that the hospitals said 355 of those patients died.

There are reports that the Assad regime is targeting Ariha in Idlib Province with airstrikes and helicopter strikes after insurgents captured at least part of the city.

This footage, purportedly from Ariha, shows a helicopter attack on the city. Activists say the regime has dropped TNT filled barrels on Ariha, injuring civilians.

There are unconfirmed reports, including from the Shaam News Network, that the FSA has overrun regime checkpoints at the southern and western entrances of Ariha, and seized regime weapons and ammunition there.

There are also reports that the regime is striking areas around Jabal Al Zawiha near Ariha, including this footage of an airstrike on Saturday morning:

Syrian State TV is pressing the line that insurgents carried out any chemical weapons attack near Damascus on Wednesday, declaring that the Syrian military “entered the terrorists’ tunnels and saw chemical agents” in an operation in the Jobar section of the capital.

The outlet claimed, “In some cases, soldiers started suffocating while entering Jobar. Ambulances came to rescue the people who were suffocating.”

Russia Today presents the propaganda, which amounts to an admission from the Syrian regime — after its initial denials — that there was a chemical weapons attack on Wednesday. The report, rather than referring to tunnels, talks about an insurgent “laboratory” where “poison”, manufactured in Saudi Arabia, was discovered; the amount was enough “to destroy a small city”:

SANA is not putting out this line through its website, however — that has been down since early this morning.

Activists say they have distributed thousands of leaflets in suburbs around Damascus, including Al Mezzah, Al Mouhajrin, Ruken Al Din , Al Jisr Al Abid, and Afif that call on Syrians to mobilize in support of the victims of the chemical weapons attacks in East and West Ghouta.

The leaflets call on residents to provide material, medical and relief aid to the victims of the attacks, and to establish campaigns to denounce the “criminal act” including mass media campaigns encouraging donations of food and medicine to them the victims.

Two detailed reports have been published on the regime attacks near Damascus which killed at least 1,360 people.

The Violations Documentation Center, which EA uses on a daily basis for a casualty count, has documented the areas hit by the rockets early Wednesday morning.

The US-based Syria Support Group has provided witness accounts and a full breakdown of casualties.

The Assad regime continues its offensive against the Damascus suburbs in East and West Ghouta hit by Wednesday’s chemical weapons attacks.

An air raid on Jobar on Saturday morning:

This footage from Friday shows panic among civilians in Irbeen as airstrikes hit the town:

Another video showing an enormous cloud of smoke rising the moment the airstrike hits Irbeen.

Airstrike in Daraya on Friday:

Strike on Al-Qaboun on Saturday morning:

This 15 minute propaganda video tells the story of how the Islamic State of Iraq and As-Sham captured shipments of marijuana and burned it.

Following the insurgent capture of Menagh Airbase earlier this month, the FSA has continued to press ahead with operations in Aleppo, with attacks on Shia villages Nubbol and Zayra. This footage, from Friday night, shows insurgents from the FSA’s Tawhid Brigade firing on the Al-Nayrab Airbase in Aleppo.

Capturing or disabling airbases is critical to the insurgency because it reduces the ability of the Assad regime to make airstrikes including against civilians. The insurgency have long complained that they lack anti-aircraft weapons, making it extremely difficult to defend against airstrikes.

Insurgents have also targeted the Kuweiras Airbase in Aleppo Province. This footage from Saturday morning shows regime warplanes inside the airbase:

The Local Cordination Committees claim 86 people were killed on Friday, including 15 women and 13 children.

Of the deaths, 22 were in Damascus and its suburbs, 21 in idlib, Province, 15 in Daraa Province, and 13 in Aleppo Province.

Victims of Chemical Weapons Attack Smuggled to Jordan for Tests

The Guardian reports that at least three victims of the chemical weapons attack near Damascus on Wednesday have been smuggled to Jordan, where samples of their blood and urine will help determine which agent was used.

Sources in insurgent-held area said a network of defectors, some of whom had fled the Syrian military’s chemical warfare division, were helping to smuggle biological samples from the scenes of the attack to Jordan.

The samples include biopsies of livers and spleens from fatalities, as well as blood and urine from survivors.

Footage shown by Britain’s ITV News adds further evidence for the likelihood of chemical attacks by the Syrian military on Wednesday near Damascus.

A survivor says, “The next morning we discovered all families dead in their homes. [I] just opened the door [to] see the whole family killed in place with foam in their mouths and eyes together with blood in their ears.”

Opposition activists said on Friday that a number of people who gave medical help to victims, including doctors, also died from exposure to chemicals.