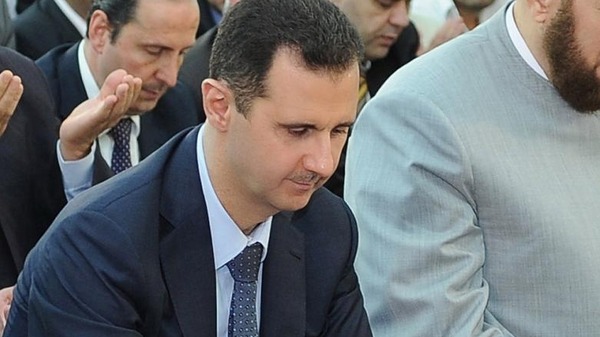 Claimed footage of insurgents of Liwa al-Islam loading rockets to fire on President Assad’s convoy in Damascus this morning:

According to Al Arabiya, an “opposition general” has said that insurgents targeted President Assad’s convoy as he traveled towards a mosque for prayers at the end of Ramadan.

[Al-Arabiya has subsequently changed the story, deleting any reference to the “opposition general”.]

The Tahrir al-Sham Brigade, a unit of the Free Syrian Army, said in a statement: “After conducting reconnaissance (on) the timing and course of Bashar al-Assad’s motorcade the area was hit with artillery. We pray to God and await the field report about the results.”

Islam Alloush of the Liwa al-Islam Brigade said rebels fired rockets which hit Assad’s motorcade as he was heading to attend the prayers: “Assad was not hit but the information we have based from sources within the regime is that there were casualties within his entourage.”

Residents of the Malki district, where Assad works and lives, told Al Jazeera that they heard shells hitting the area.

Claimed video of the shelling:

Assad on state tv, unclear if it's prerecorded #Syria pic.twitter.com/jxGGW21j68

Fun and games for children in Raqqa at an Eid carnival organized by local insurgents and activists.

A UNHCR video posted on Thursday offers a glimpse into the lives of Syrian refugees living in cramped conditions in tent encampments in Lebanon.

Jarba was accompanied to the town of Tel Shehab by Ahmad Nima, head of the Daraa Military Council.

The Coalition leader inspected food parcels and greeted refugees — thousands of Syrians have been displaced in Tel Shehab — at a rundown school.

The Kurdish militia YPG claim they have taken five tanks from Syrian forces fleeing the fall of the Menagh Airbase in Aleppo Province:

Amid all the fighting and bloodshed on Thursday, this set of videos is a welcome change.

A Kurdish group, Hevreza Birati Ya Kurdi, has organized an Eid al-Fitr drawing contest for the (extremely well-behaved!) children in a school in the Kurdish town of Efrin in Aleppo Province. The children received gifts of books and cash prizes.

Intense footage of opposition fighters attacking a regime position in the Manshyea district of Daraa:

Video: Fatah Brigade Give Statement After Capture Of Menagh Airbase

The moderate Islamist Fatah Brigade, affiliated to the Aleppo Military Council, made a statement on Thursday regarding the capture of the Menagh Airbase near Aleppo in which it thanked the other factions who participated in the assault, including the Islamic State of Iraq and As-Sham:

Another outcome of the insurgent capture of the Menagh Airbase is the return of civilians to the neighboring village, Menagh:

AFP on Thursday cites an “Arab diplomat with contacts in Moscow” as saying that Russia has turned down a proposal by Saudi Arabia for a huge arms deal in return for Moscow abandoning its support of Syrian President Bashar al-Assad.

As evidence of the supposed deal, AFP quoted a “European diplomat who shuttles between Beirut and Damascus” as saying that Bandar had wanted to meet Putin, rather than his Russian counterpart, and had told the Russian President that “Riyadh is ready to help Moscow play a bigger role in the Middle East at a time when the U.S. is disengaging from the region.”

In Thursday’s report, however, AFP turn to an “Arab diplomat with contacts in Moscow”, who said: “President Putin listened politely to his interlocutor and let him know that his country would not change its strategy. Bandar bin Sultan then let the Russians know that the only option left in Syria was military and that they should forget about Geneva because the opposition would not attend.”

One of the key challenges for the Assad regime — and indeed for the insurgency in areas they control — is how to maintain food and electricity supplies to the populace under its control.

State media on Thursday gives an indication of just how much these issues are troubling the regime, with two stories discussing the issues of food security and maintaining electricity despite challenges.

The first report describes how Electricity Minister, Imad Khamis, has conducted a tour of an electricity power plant at Bab Sharqi in Damascus — a traditionally Christian area that has seen pro-regime demonstrations — where he said that the regime is working to
reconstruct infrastructure.

Khamis’s tour was also aimed to boost morale among electricity workers, whom he said had “proved that they are one of the power points that help the country to remain steadfast”.

SANA’s second story is a report on another morale-boosting tour by a senior regime official, this time Prime Minister Wael al-Halqi, who visited the Services Directorate in Kafr Souseh (a largely pro-regime area containing some security buildings and Damascus University) and the Temporary Bakeries Committee and Firefighting Center in Damascus’s Mazzeh district (an Alawite area loyal to Assad).

Halqi, who was photographed presenting gifts to firefighters, cleaners and bakery workers, said that that the Assad government is working to combat attempts to target Syria’s food security by “directly providing the citizens with all the main food materials as well as the basic industrial, production and service requirements”.

Despite reports that Syria faces a growing food crisis, al-Halqi said that the Assad government had created “strategic stockpiles of the various materials, particularly wheat and flour”, and added that Syria’s service and economic sector is “stable”.

The FSA’s Fatah Brigade, which took part in the offensive to capture the coveted and strategically important regime-held Menagh Airbase, posted this video on Thursday showing brigade fighters having Eid prayers in the base, then traveling in a convoy to Tel Rifaat, south of the base, to pay their respects at a cemetary there. The moderate Islamist Fatah Brigade was founded in Tel Rifaat.

Regime warplanes on Thursday bombed the village of Al Zafaraneah, north of Homs (see map), killing more than 25 people, according to activists.

This video shows the first moments after the strike, as civilians — celebrating the Eid al-Fitr holiday — rush out to see what is happening: 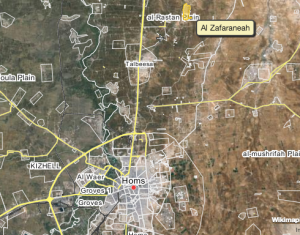 The head of the United Nations’ humanitarian operations, Valerie Amos, has proposed 30 measures for Syria and neighboring countries.

Amos called for “zero tolerance” by all parties for killing and maiming children and recruiting them to fight; the immediate demilitarization of medical facilities, schools and water stations; and safeguarding of health facilities, personnel and ambulances.

Amid reports of increasing difficulties in the delivery of aid, Amos said the government and opposition should authorize representatives who have authority to deal with all operational and policy issues. She urged the Syrian government to lift “bureaucratic obstacles” and accelerate the issuance of visas to humanitarian workers, increase the number of international aid organizations, fast-track customs procedures for humanitarian goods and equipment, speed up the time frame for approving convoys, and facilitate the establishment of additional humanitarian hubs.

She added that there must be protection for humanitarian staff and vehicles, agreement on priority humanitarian routes, and “cross-border assistance”, with the possibility of “days of tranquility” to allow the passage of humanitarian convoys and evacuation of the sick and wounded.

Beyond Syria, Amos called for a regional strategy and specific plans for countries neighboring Syria as well as open borders and equal treatment for Palestinian and Syrian refugees.

State news agency SANA, citing an “official source”, say five people were killed — including a child — and 12 others injured on Thursday by two mortar shells fired by insurgentsin the al-Sayyeda Zainab area in south Damascus.

The neighborhood is the site of the al-Sayyeda Zainab Mosque, a holy site for Shia Muslims as it has the grave of the Prophet Muhammad’s granddaughter.

Footage from the Homs neighborhood of Al Wa’er shows residents visiting the graves of family members killed in the fighting. In the past weeks, Al Wa’er has come under extremely heavy regime shelling. The casualty figures are not known.

A series of videos from Wednesday shows large crowds at the Garage al-Hajz checkpoint in the Bustan al-Qasr neighborhood of Aleppo.

Overcrowding at the checkpoint:

Free Syrian Army insurgents spray water on civilians as they cross in the extreme summer heat:

A different view of the crowds using the crossing:

State media agency SANA on Thursday reports comments by the Syrian Information Minister, slamming the Al-Arabiya news outlet for a story this morning that claimed insurgents had attacked President Bashar al-Assad as he drove to perform Eid al-Fitr prayers in the Anas Bin Malek Mosque in Damascus.

Omran al-Zoubi was quoted as telling State TV that:

“With regard to what the Saudi al-Arabiya channel said, I stress that the news is completely baseless and a mere reflection of the wishes and illusions of some media outlets and the governments standing behind them….Had there been professionally and ethically respectful media, al-Arabiya channel would have immediately discharged the administrative staff that supervised this false news…Still, their choice is to continue lying.”

Al-Zoubi went on to criticize Al Jazeera, saying that it and Al-Arabiya had “since the beginning of the crisis in Syria working on fabricating and falsifying news”.

The FSA’s Northern Storm Brigade, one of the key brigades fighting in the offensive to take the Menagh Airbase near Aleppo, have made a video tribute to Ammar Dadikhi, the commander killed in the battle. After the fall of the Airbase, the FSA said it was renaming the base to honor Dadikhi.

It is the fifth day of a major insurgent offensive in northern Lattakia Province in western Syria, with opposition fighters claiming a string of villages and regime posts. Footage on Wednesday of Ahrar al-Sham Brigade troops moving from house to house and stomping on a Syrian regime flag:

While President Assad was unhurt by this morning’s insurgent attack on his convoy, officials are going further and saying nothing happened at all:

Now: Minister of Information on State TV is saying nothing happened & #Assad arrived to Mosque driving his own car!! #Syria #Damascus

State TV ignored news of shells in #Malki when #Assad was supposedly there. Minister of Info.: nothing happened at all. #Syria #Damascus

Attack on Assad Convoy “Not Precise”; Regime Hits Back with MiG Strike & Rockets

Shells in #Malki were not precise but scatered. Eyewitness confirm: 1 shell landed inside Morabet Palace & another on its fence. #Damascus

The regime has hit back with attacks on insurgents positions in and near the capital:

It's hard to authenticate news among a mountain of rumors. What's confirmed: #Malki was hit by moratrs, regime responded using MiG & rockets

MiG jet is not only targeting Eastern Ghota, but also southern neighborhoods in #Damascus #Syria

Marking the end of Ramadan, the US has allocated another $195 million in food and humanitarian aid to Syria.

The White House statement brings the total of announced US aid to more than $1 billion since the conflict began in March 2011.

The Local Coordination Committees claim 136 people were killed on Wednesday, including 101 in Damascus and its suburbs.

The Violations Documentation Center puts the number of dead at 68,854 since the start of the conflict, a rise of 81 since Wednesday. Of these, 53,154 are civilians, an increase of 55 from yesterday.