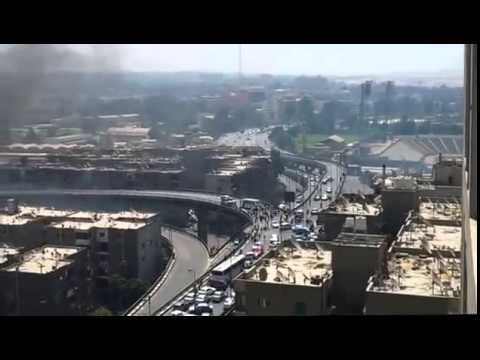 One of the dramatic stories during Wednesday’s mass killings in Egypt was that anti-regime protesters had pushed a police vehicle off a bridge in a Cairo suburb of Nasr City, near the sit-in that was being attacked by security forces.

We featured a picture of the incident, which supposedly killed several officers, and video which showed the vehicle on the ground as clashes raged around it.

This morning, however, a video has been posted which appears to give a very different version of the event — amid congestion on the 6 October Bridge in Nasr City, the police vehicle hits a bus. It then reverses and skids off the bridge.

While men are following the police van as it backs up, they are not close enough to have “pushed” the vehicle.