Syria Interview: A Kurdish Commander Explains the Fighting in the North 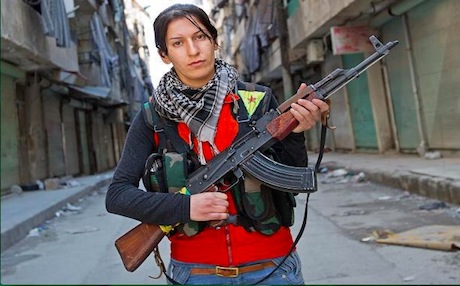 The Kurdish website Rudaw posts an interview with Sipan Hemo, a commander of the Kurdish People’s Defense Units (YPG), which is fighting insurgents — notably the Islamist faction Jabhat al-Nusra — across northern Syria:

On the YPG’s growing involvement in the conflict:

Some of the Arab villagers support YPG. Actually, it was upon their request that the YPG went there. The Jalagha and Jiburi tribes support the YPG. Most of the region supports the YPG. I have to point out that in the recent clashes we have been fighting against many foreigners, who are entering Syria from Turkey. For instance, the ones killed in Serekaniye were the citizens of other countries such as Egypt, Saudi Arabia and Tunisia. One of the jihadists was a US citizen! Many of the militants killed in Tel Kochar were carrying Iraqi and other passports.

Why the “West” should support Kurdish groups in Syria:

We Kurds are a democratic, progressive, and tolerant people in the region. Look at the Kurdistan Region! It is the best example of what I am saying. None of the Arab nations have reached such an advanced level. Kurdish people have potential to even create better than this. Therefore, it is in the interest of the US and the West to acknowledge the Kurds (in Syria) and their potential….

If Kurds gain status in the Middle East, it will certainly benefit the US and the West as well….

The conflict between the Alawites and Sunnis has reached an irreversible point. This issue can only be resolved through recognizing the Kurds and granting their rights. Nobody other than Kurds can remedy this problem. If the US and the West do not take Kurds into account, radical Islamists will take over, and that will cause Syria to break up.

On relations with Turkey:

Contrary to what has been said, [the YPG] see ourselves as friends of the Turkish people. We side with those who can contribute to the advancement of democracy in the region. If the region gets under the control of radical Islamists, that would be a disaster for the Middle East.

On the labelling of YPG as the military wing of the Kurdish political movement PYD:

When we decided to form YPG, we not only visited PYD, but also other parties as well. We visited the President of the [Iraqi] Kurdistan Region, Massoud Barzani, too. We have knocked on the doors of many parties, people and leaders.

We told all these people that we were planning to form a military power in Western Kurdistan….

I want to repeat once more that we are not a military wing of any party! We are under the command of the SKC [Supreme Kurdish Council].