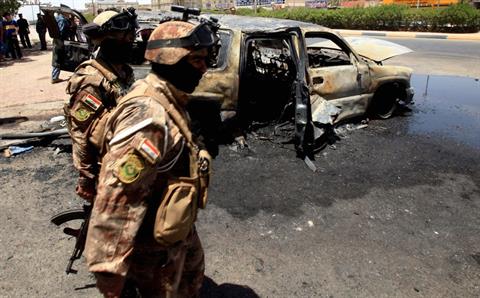 At least 60 people were killed in 17 car bombs early Monday in predominantly Shia areas of Iraq.

At least 10 people died when two car bombs blew up near a bus station in the city of Kut, 150 kilometers (93 miles) southeast of Baghdad.

Four more were slain in a blast in the town of Mahmoudiya, about 30 kilometres (19 miles) south of the capital.

In Baghdad’s Shia area of Sadr City, police and witnesses said a minivan drew up to a group of men waiting by the side of the road for day work, and the driver told them to get in before detonating an explosive device in the vehicle.

Bombs also exploded in the Baghdad neighborhoods of Habibiya, Hurriya, Bayaa, Ur, Shurta, Kadhimiya, and Risala.

Almost 4,000 people have been killed in Iraq this year, with a sharp escalation in deaths since April. More than 800 people have died this month.

The source said 10 people have complained about torture by Muslim Brotherhood loyalists at Rabea al-Adaweya and al-Nadha Squares, the focal points for pro-Morsi demonstrators.

The Ministry claimed in a statement that three unidentified corpses, discovered at Omraniya in Giza earlier this month, also appeared to show signs of torture.

One suspect had been identified, admitting affiliation to the Muslim Brotherhood and involvement with other pro-Morsi protesters at al-Nahda Square, the statement asserted.

Little information was given about the “exchange in perspectives on Egypt’s political scene and its democratic transition and the European Union’s role during the current phase and its future plans to support the region’s stability”.

Raif Badawi, the founder of the Free Saudi Liberals website , was sentenced on Monday to seven years in prison and 600 lashes.

Badawi was arrested in June 2012 and charged with “setting up a website that undermines general security” and ridiculing Islamic religious figures.

The Free Saudi Liberals website, an online forum for public discussions, was shut down following Badawi’s arrest after it was blocked within the country for years.

In today’s verdict, the judge ordered the permanent closure of the website:

The marchers set off several kilometers away from the Rabaa al-Adewaya Mosque, the site of a month-long sit-in by pro-Morsi demonstrators. They carried pictures of the former President, flashing victory signs, and chanting, “Our blood and souls we sacrifice for Morsi.”

The army, saying it was aware of the planned march, issued a statement urging protesters “not to come close to military facilities in general, and the headquarters of military intelligence specifically”.

One soldier has been killed and eight wounded in an attack on a military camp in the Sinai city of Rafah, near the border with Gaza, State media report.

There have been repeated clashes and attacks in the Sinai Peninsula, with Bedouin and Islamist groups striking at security forces.

A soldier has been killed in overnight fighting in Benghazi in eastern Libya, hours after two explosions near judicial buildings in the city.

The clashes erupted in the western Gwesha district between an armed group and military special forces.

At least 13 people were wounded in the bombs near a courthouse and an office of the Ministry of Justice.

Both men were taken to Tora Prison on the edge of Cairo.

The Wasat Party split from the Muslim Brotherhood, the main force behind the Government overthrown on July 3, but Madi and Sultan are firm supporters of deposed President Mohmaed Morsi.