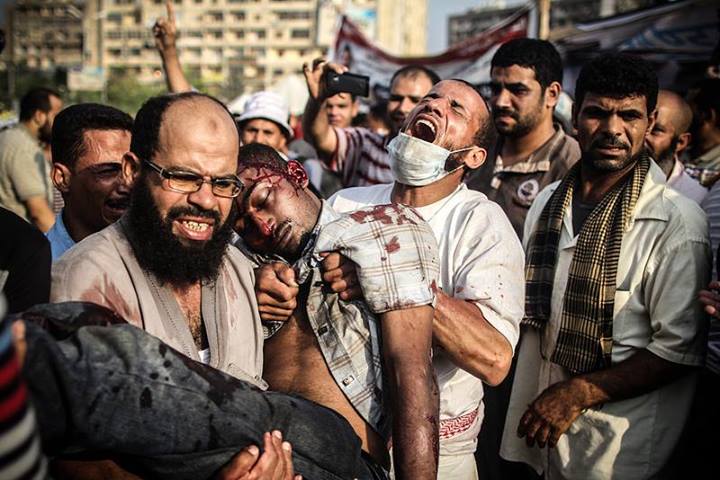 Almost three weeks after Egyptian security forces killed about 50 supporters of former President Morsi in Cairo, the cycle of killing, blame, and defiance was repeated on Saturday.

Scores of pro-Morsi protesters were slain late Friday night, with police opening fire after some of the demonstrators tried to set up barricades on the 6 October Bridge, a vital and symbolic thoroughfare in Cairo. The casualty figure is still shrouded in confusion: the Ministry of Health says 80 were killed, with 792 injured; the Muslim Brotherood, a major backer of Morsi, says 66 are dead, 61 “clinically dead”, and 4,500 wounded.

On Saturday, the regime was unrepentant. The Ministry of Interior and police blamed the Morsi supporters for the fighting and insisted that security forces had not used live ammunition. They said 14 policemen had been injured, including two who were in critical condition after being shot in the head.

Minister of Interior Mohamed Ibrahim went farther with a warning: the demonstrations, including the long-running pro-Morsi sit-in at Rabaa El-Adewaya Square, will be dispersed “as soon as possible”, albeit in “a legal fashion”.

The interim President, Adli Mansour, and interim Prime Minister Hazem El-Beblawi have not offered any comment on the events.

A crocodile spotted by citizens in the Beirut River has eluded capture, LBCI reports.

According to LBCI, Lebanon’s Civil Defense Marine Rescue Team has deployed a team on the riverbank, and spotted the crocodile under the heavily polluted water.

A bomb has gone off in front of the courthouse in Benghazi, Libya’s second city, amid rising tension over violence and assassinations.

Two explosions rocked the city, a resident and a security source said.

A security source said there were a blast in the vicinity of an office of the Ministry of Justice.

Tunisia: Police Use Tear Gas to Disperse 1000s of Protesters

Police have fired tear gas at thousands of protesters, who rallied in Tunis over the assassination of leading politician and activist Mohamed Brahmi.

Brahmi, the leader of a leftist party, was killed in front of his home on Thursday.

The demonstrators gathered outside Parliament on Sunday, a day after Brahmi’s burial.

The opposition has called for the ruling coalition Government, led by the Islamist Ennahda Party, to step in favor of a national unity administration.

Egypt: Minister of Interior Promises To “Decisively Deal With Any Attempt to Undermine Stability”

Following his Saturday declaration that sit-ins for former President Morsi will be dispersed, Minister of Interior Mohamed Ibrahim has told a graduation ceremony at the national police academy, “I assure the people of Egypt that the police are determined to maintain security and safety to their nation and are capable of doing so.”

Ibrahim continued, “Salute to the great Egyptian people who made these miracles….impressing the whole world, giving the police and army the mandate to respond decisively to anyone who poses a risk to the stability of the nation.”

The Minister concluded, “We will not allow any mad, spiteful men to disturb the peace.”

Later, the National Defense Council warned protesters “not to exceed their rights to peaceful, responsible expression of their opinions”, else they would face “decisive and firm decisions and actions in response to any violations”.

The Israeli Cabinet has approved the release of 104 Palestinian prisoners.

The step comes as the US tries to bring Israel and the Palestinian Authority back to the negotiating table.

“This moment is not easy for me, is not easy for the cabinet ministers, and is not easy especially for the bereaved families, whose feelings I understand,” Prime Minister Benjamin Netanyahu said in a broadcast at the start of the meeting.

“But there are moments in which tough decisions must be made for the good of the nation and this is one of those moments,” he said.

Palestinian Authority leader Mahmoud Abbas has demanded the release of prisoners held since before the 1993 Oslo peace accord took effect. Israel has detained thousands more Palestinians since then.

The prisoner release would allow Netanyahu to sidestep other Palestinian demands, such as a halt to Jewish settlement expansion and a guarantee that negotiations over borders will be based on boundaries from before the 1967 Middle East war, when Israel captured the West Bank, Gaza Strip and East Jerusalem.

The toll from fighting in Port Said between supporters and opponents of former President Morsi has been updated to one dead and 29 injured, three critically.

Clashes have also been reported on Sunday in the Helwan area of Cairo and in Mahalla, after the funeral of a Muslim Brotherhood member.

About 100 inmates out of 1,117 who escaped during a prison riot in the eastern Libyan city of Benghazi have been recaptured, a security official said on Sunday.

Officials said there had been an attack on the facility from outside as well as a riot inside.

Mohammed Sharif, head of security in Benghazi, said some prisoners had turned themselves in and others had been captured.

“The prison is back in operation as of this morning,” he said. “Seventy prisoners were brought in initially. Another 30 were caught in the town of al-Marj and seven in Ajdabiyah. They will be brought back to Kuafiya,” a town in eastern Libya.

Human Rights Watch (HRW) on Sunday slammed the Hamas authorities in Gaza for closing the media offices of the Ma’an and Al-Arabiya news agencies. On Thursday Hamas officials said that the two offices had been closed because they had ‘fabricat[ed] news and diffused false rumors and baseless information, threatening civil peace and harming the Palestinian people and their resistance.’

HRW said that the allegations related to broadcast and published reports by the two agencies that suggested Hamas supported the Muslim Brotherhood in Egypt. The rights group called the Hamas authorities to reopen the media offices, and said they had ‘shut down their critics’ without providing information to support their claims of being misrepresented.

The Tamarod campaign, instrumental in last month’s protests that led to the downfall of President Morsi, have issued a statement that it is highly concerned about a return of the Mubarak era State security apparatus.

In a press conference on Saturday, Minister of Interior Mohamed Ibrahim announced that departments of State security —-tasked with fighting extremism and monitoring political and religious activity, but terminated after the 2011 Revolution overthrew the Mubarak regime — have been reinstated.

“Our campaign supports the state’s plans in fighting terrorism; however, we have earlier stressed that this support doesn’t include the taking of extraordinary measures, or the contradiction of freedoms and human rights,” said Mahmoud Badr, spokesman of Tamarod.

Badr said that Ibrahim’s comments “are unacceptable” and contradict with the principles of the January 25 Revolution against Mubarak, where “freedom was one of its main goals”: “We will never accept the return of Mubarak’s state security [apparatus] or the chasing of political activists under any name.”

Egypt: At Least 15 Injured in Port Said in Overnight Fighting

At least 15 people have been injured overnight in Port Said overnight in clashes between supporters and opponents of ousted President Morsi.

The violence broke out during the funeral of a Morsi supporter.