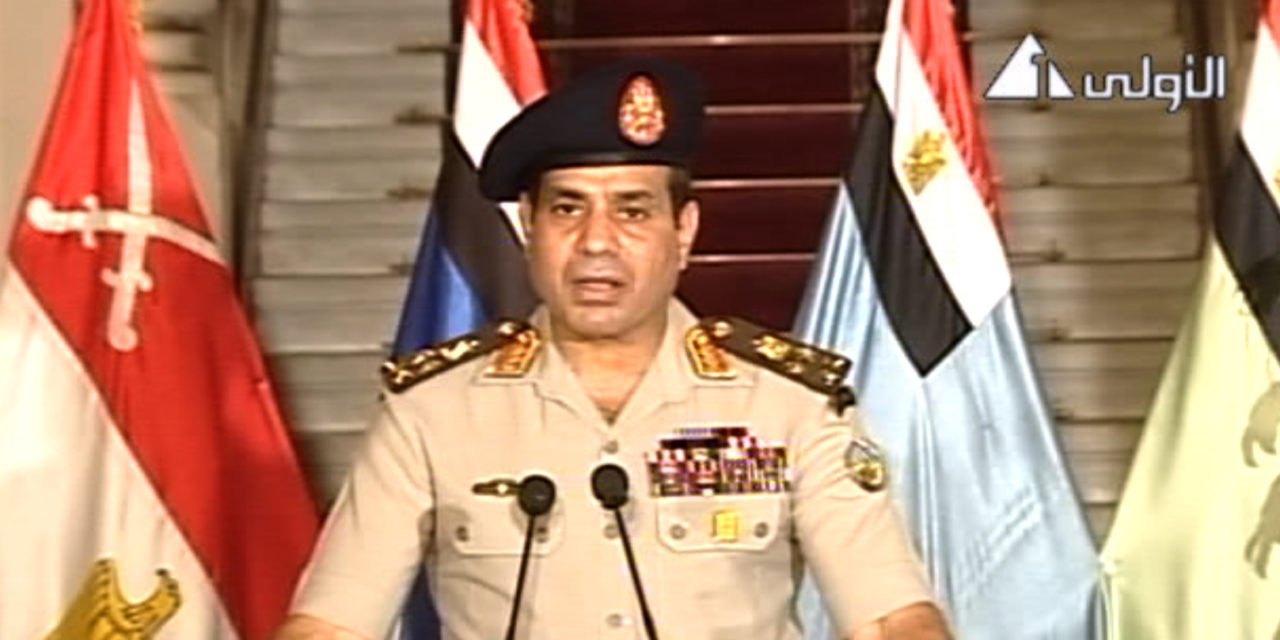 General Abdel-Fattah al-Sisi, the head of Egypt’s armed forces, has defended the removal of President Mohamed Morsi on 3 July, saying Morsi had violated his popular mandate and antagonised state institutions.

Al-Sisi claimed he frequently advised Morsi before giving him a 48-hour ultimatum on 1 July to reconcile with opponents and address public demands.

He said he sent two envoys, including then-Prime Minister Hesham Kandil and a trusted legal expert, to urge Morsi to hold a referendum on whether voters still supported his presidency. The suggestion was rejected out of hand, al-Sisi asserted.

Al-Sisi appealed to all parties to participate in the new transition, saying it is overseen by an unbiased leader and will restore the right of people to choose.

Police fired tear gas in central Cairo on Monday night amid scuffles broke out between supporters and opponents of ousted President Mohamed Morsi.

One witness said the police fired tear gas at the Morsi supporters after they cut off access to Ramses Street, one of Cairo’s main thoroughfares, and the October 6th Bridge across the Nile.

Police fire year gas from bridge backed by some youth who throw rocks down at Morsi supporters. Some fires lit pic.twitter.com/CqvUlCIV2P

Mahmoud Badr, the co-founder of the Tamarod (Rebel) movement — instrumental in the mass protests against former President Morsi last month — has publicly refused to meet US Deputy Secretary of State William Burns in Cairo.

Badr declined an invitation to participate in a roundtable discussion with Burns and US Ambassador to Egypt Anne Patterson today because Washington “supports the Zionist entity” and “currently supports the Muslim Brotherhood” — the faction behind the Morsi Government.

The State Department said that the visit by Burns (see earlier entry) will “underscore US support for the Egyptian people, an end to all violence, and a transition leading to an inclusive, democratically elected civilian government”.

Despite Tamarod’s claims, the Muslim Brotherhood, which backed the Morsi Government, also apparently refused to sit down with BUrns:

State Dept: Dep Sec Burns has not met w/Muslim Brotherhood while in #Cairo. But we are in touch w/them

A “security source” has said that the Lebanese Army dismantled a bomb Saturday night near the Higher Shiite Council in the Beirut suburb of Ghobeiry,.

Last week a car bomb exploded in the neighborhood of Bir al-Abed, which has a significant Hezbollah presence, wounding at least 51 people.

Egypt — Senior US Official in Cairo for Talks

US Deputy Secretary of State William J. Burns has arrived in Cairo for meetings with the military-backed interim Government.

The US Government has reacted publicly with caution to the deposition of former President Morsi, refusing to call the event a “coup” — as this might jeopardise $1.3 billion per year in American military aid — or to criticise the military takeover beyond calling for the freeing of Morsi from any house arrest.

Reports have claimed that the military was in contact with senior US officials, including Secretary of Defense Chuck Hagel, as it planned the 48-hour ultimatum to Morsi that led to his downfall.