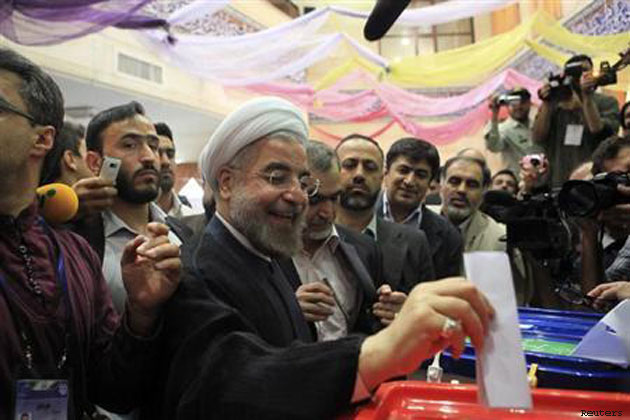 LATEST: Gathering for Lawyer Nasrin Sotoudeh on Her Temporary Release from Prison

President-elect Hassan Rouhani used a Wednesday meeting with high-ranking clerics to declare the renewal of their role in the Islamic Republic: “The trust of the majority of the Iranian people in this seminary…is a source of pride and glory for me.”

The declaration of Rouhani — the only cleric among the six candidates on last month’s ballot — had several objectives, as he prepares for his inauguration next month. The initial one was to establish his support for Ayatollah Khamenei, as he expressed gratitude for his “political success under the consideration of the Supreme Leader”.

At the same time, the President-elect’s statement was an implicit challenge to the repression of the regime, especially since the disputed 2009 election:

This destruction [of the clergy]…came from individuals who were sometimes two-faced and [boasted] of their relationship with religion….The fundamental group of clergy, the great clergymen and those who had a fundamental role in the revolution were unfortunately subjected to unfair and destructive attacks, but the people answered in these elections and wanted to say that ‘we view the clergy as the solution to political issues and view them as trustees of the prophet.

Ostensibly, Rouhani’s criticism could be portrayed as that of the outgoing Ahmadinejad Government, but his words can also be read as a riposte to the sustained attacks on clerics who questioned the crackdown on protests from 2009. Those clerics include Rouhani’s mentor, former President Hashemi Rafsanjani; Grand Ayatollah Yousuf Sane’i, whose house was attacked, and Ayatollah Dastgheib, whose offices in a Shiraz mosque were ransacked; and even the 2009 Presidential candidate Mehdi Karroubi, held under house arrest since February 2011.

Rouhani also linked his address to his theme of “moderation” and call for expanded social and media freedom:

We must remember that there may be various interpretations of Islamic law. We must not [impose] absolutism and call all leanings as takfir….In this regard, we must tolerate different leanings and correct their problems with admonition and good fighting, not confront them with accusations….

“Shi’a and Islamic thought are based on justice and moderation.

Gathering for Lawyer Nasrin Sotoudeh on Her Temporary Release from Prison

Sotoudeh, a prominent attorney for human rights cases, was detained in September 2010 and is serving a six-year term. 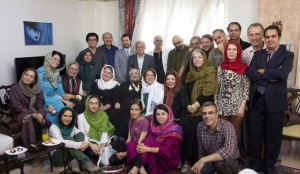 Russia’s deputy Foreign Minister said Thursday that Moscow is concerned about the lack of progress over fixing dates for a next round of nuclear talks between Iran and the P5+1 world powers, ITAR-TASS reports.

Sergei Ryabkov said that “contact between the Iranian side and the P5+1, was we have always said, must take place as soon as possible. Of course, such action depends on schedules and the readiness of all parties to participate in such a process. As of the beginning of July, there is no agreement of concrete dates for such contact. We would hope that will take places before the end of the summer.”

Ryabkov added that Moscow believed it was a “serious problem” that the momentum of the talks had been lost.

HRW cited the recent examples Mir Hossein Mousavi, the former presidential candidate who is currently under house arrest. Mousavi, who has a serious heart condition, has been prevented from receiving regular medical treatment. He was briefly hospitalized earlier this week for complications related to his blood pressure.

HRW said in a statement that:

A source familiar with Mousavi’s medical case told Human Rights Watch that his blood pressure fluctuates erratically due to his heart ailment. The source said that security forces have not permitted him to receive medical check-ups at least every 50 days, as doctors recommended, and prevented him from remaining in the hospital during the latest visit for medical tests. He suffers from a blocked artery and underwent angioplasty in 2011.


HRW also note the sudden death — allegedly from a heart attack — of a 42-year-old trade union activist, Afshin Osanlou, who was serving a five-year sentence at a prison near Tehran.

HRW say that the families of other political prisoners have accused the authorities have denied them access to medical care or regular family visits, deepening their isolation and increasing fears for their safety and well-being.

Journalist Fatemeh Kheradmand, has been sentenced to one year in prison for “propaganda against the regime”.

Kheradmand, a member of Mir Hossein Mousavi’s campaign in the disputed 2009 Presidential election, was detained on 7 January after a raid on her home, spending 25 days in detention before release on $40,000 bail.

Kheradmand’s husband, journalist Masoud Lavasani, is under threat of a two-year prison sentence.