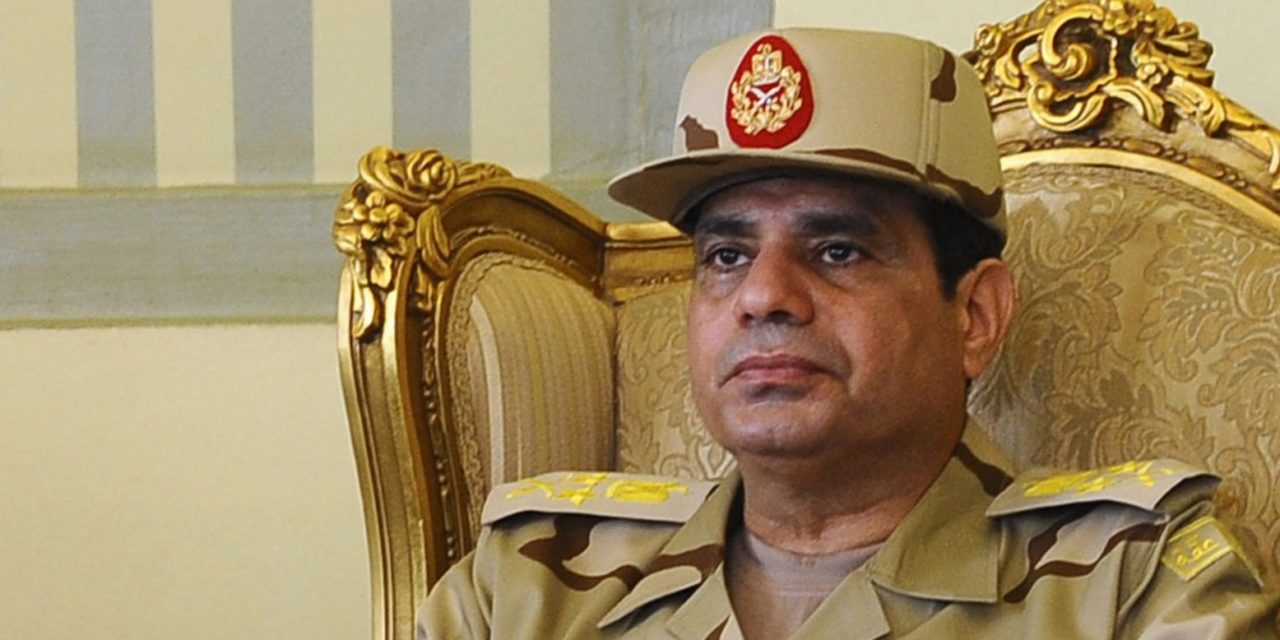 The BBC has provided a transcript in English of the Wednesday evening’s announcement on State TV by the  head of Egypt’s armed forces General Abdul Fattah al-Sisi to suspend the constitution and remove the President, Mohamed Morsi.

“In the name of God, the Most Merciful, the Most Compassionate. Oh great people of Egypt!

As the armed forces cannot just turn a deaf ear and a blind eye to the movement and call of the Egyptian people, they have invoked their patriotic, and not political, role.

The armed forces themselves were, still are and will continue to be the first to announce their need to remain distant from political action.

Rather, they have called on us to perform public service and to secure essential protection of the demands of their revolution. Such is the message which the armed forces have received from across Egypt’s urban centres, cities, villages.”

‘Tremendous efforts’
“The armed forces have comprehended this appeal, understood its intention, and come to see its necessity. We have drawn closer to the political scene, motivated by hope and willingness and stressing commitment to every sense of duty, responsibility, and faith.

Over the past few months, the armed forces have exerted tremendous efforts, both directly and indirectly, to contain the domestic situation and conduct national reconciliation comprising all the political forces, including the presidential institution.

In November 2012, the armed forces called for a national dialogue, to which all the national and political forces had responded, but which was rejected by the presidency at the last moment.

Subsequent calls and initiatives have been put forward since then. The armed forces have on several occasions presented a strategic assessment on the domestic and foreign levels, addressing the most pivotal challenges and dangers facing the homeland on the economic, security, political, and social levels.

We have also presented the vision of the armed forces, as a national institution, as to how to address the factors leading to social divisions; how to remove tension; and how to confront the challenges and dangers in order to end the current crisis.

As parts of the efforts exerted in response to the current crisis, the General Command of the armed forces held a meeting with the president of the republic in the Quba Palace on 22 June. The armed forces expressed their opinion and conveyed rejection of inflecting harm on the state’s national and religious institutions.

We also expressed rejection of attempts to intimidate or threaten the Egyptian people. There was hope that national accord would be achieved to delineate a roadmap and to give the people a sense of trust and reassurance, in addition to stability, in a way that secures their hopes and aspirations.”

“However, the speech which the president made last night before the expiry of the 48-hour deadline failed to meet the overall demands of the people, prompting the armed forces – in compliance with their historic and national duties – to consult with some figures representing political, national, religious, and youth forces without excluding any party.

The parties present agreed on a future roadmap containing initial measures which ensures the construction of a strong and coherent Egyptian society which does not exclude any of its members and trends, and which ends the state of conflict and division.

The roadmap includes the following:

A media charter of honour shall be designed in a way that ensures media freedom; observes professional rules, credibility, and neutrality; and advances the homeland’s top interests
Practical measures shall be taken to empower young people and integrate them into the state’s institutions so they can be partners in the decision-making process on the various levels of the executive authority

A higher committee for national reconciliation shall be formed. The committee shall comprise figures who enjoy credibility and acceptance from all national forces, and who represent all affiliations
The Armed Forces hereby call on the great Egyptian people, with all their affiliations, to ensure the peacefulness of the demonstrations and avoid violence as it only leads to further tension and to the shedding of innocent blood.

We hereby warn that – in co-operation with the elements of the Ministry of the Interior and in accordance with the law – we will stand firmly and decisively against any forms of painlessness in fulfilment of our historic and national responsibilities.

The armed forces hail the honest and dedicated elements of the forces, the police, and the judiciary for their great national role and their continued sacrifices to maintain the safety and security of Egypt and its great people.

May God protect Egypt and its glorious great people. Peace be upon you.”