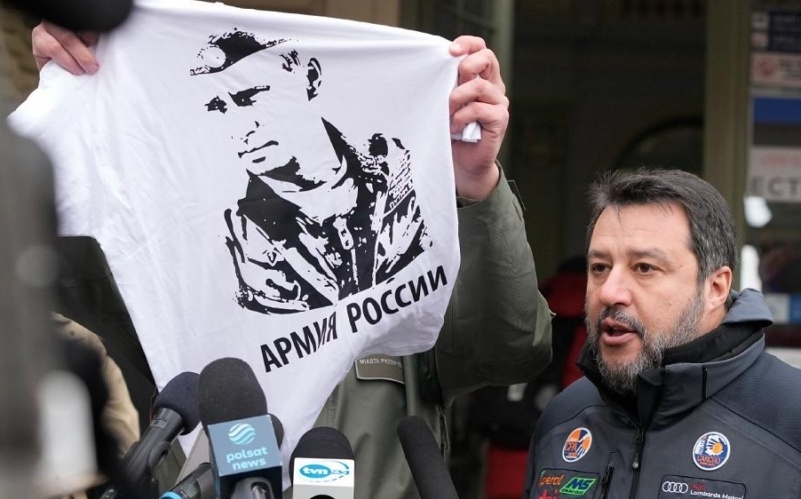 The mayor of Przemysl, Poland, Wojciech Bakun holds up a T-shirt with the likeness of Vladimir Putin and the words “The Russian Army” as he stands alongside visiting Matteo Salvini, the leader of Italy’s League, March 8, 2022 (AP)

Members of the Populism in Action Project — Daniele Albertazzi, Adrian Favero, Niko Hatakka and Judith Sijstermans — write for the LSE European Politics and Policy site about radical right-wing populist parties adjusting their positions in the face of Vladimir Putin’s War on Ukraine:

When Matteo Salvini, the leader of Italy’s populist radical right League, visited the Polish town of Przemysl on March 8, nobody had prepared him for the welcome party organized for him by Mayor Wojciech Bakun.

Expecting to be thanked for bringing aid to Ukrainian refugees, Salvini was instead reminded of his past warm words about Russian President Vladimir Putin. He was given a T-shirt emblazoned with Putin’s image. Salvini had posted pictures of himself wearing a similar T-shirt in Moscow, where he repeatedly visited Putin and representatives of his ruling party in 2015 and 2017 — and where Salvini criticized the sanctions imposed by the European Union after Russia’s 2014 annexation of Ukraine’s Crimea.

For years, we have studied the language of Western Europe’s populist radical-right parties in Western Europe — such as Italy’s League, the Finns Party, Belgium’s Flemish Interest, and the Swiss People’s Party — on the issue of refugees and Russia. Now we seek to understand why these parties are softening their tough image over asylum, in light of the conflict in Ukraine, and how far they are willing to go.

The radical right has shifted its position on Putin rapidly. In Flanders, Flemish Interest had shown understanding for the Russian leader’s politics, even though it never embraced Salvini’s openly pro-Putin position.

Party leader Tom van Grieken said of Putin in December 2016, “He does a good job for Russian interests. But I’m not sure he is good for the rest of the world.” Van Grieken added, “Putin is not black or white, but 50 shades of gray.”

Three Flemish Interest MPs agreed to act as “international observers” for Russia’s staged referendum on the status of Crimea held in March 2014. The party distanced itself from this visit, but MPs had contributed to legitimizing the vote after Russia’s occupation.

The Swiss People’s Party had been less hostile to Russia than many other parties in Europe. It rejected calls to sanction Moscow in 2014, highlighting the need for Switzerland to remain neutral despite the annexation of Crimea by force.

As for the Finns Party, it has never been pro-Russian, unlike some far-right fringe parties in Finland. However, its representatives criticized the EU’s decision to impose sanctions, in line with the pronounced Euroscepticism distinguishing the party in 2014.

Reframing on Refugees and NATO

There has been a reframing by many of these parties of their positions on Russia and asylum seekers. Salvini and van Grieken have expressed unequivocal support for Ukraine, with the latter tweeting about the difference between what he sees as “real” refugees fleeing Ukraine and their “fake” counterparts travelling to Europe from Syria and Afghanistan. Flemish Interest has attacked the Belgian Government for what it perceives to be small and tardy investments in defense, using Ukraine is a tool to bolster claimed credentials as the party that cares about Belgian military strength.

Significantly, the Russian invasion has overturned the military policy of the Finns Party. In mid-February, its Parliamentary group leader described Finland’s accession to NATO as “somewhat unnecessary” and as “a factor that would undermine Finnish sovereignty”. That stance reflected the party’s long-standing support for retention of Finland’s non-allied status. But after Ukraine was invaded, the leaders of the party’s parliamentary group and a majority of the party’s supporters accepted the need for NATO membership.

Only the Swiss People’s Party (SVP) does not appear to have shifted position. On February 28, Switzerland’s executive, which includes the SVP, adopted EU sanctions against Russia. In contrast, the party insisted that Switzerland should remain committed to impartiality. The former SVP leader Christoph Blocher asserted, “By accepting to apply sanctions, Switzerland is now at war.”

How can we explain the shift of position of most populist radical right parties?

A vital reason is the centrality of nationalism for these parties’ identities. The abandonment of Switzerland’s pluri-secular stance, based on armed neutrality and independence from its larger European neighbours, is unacceptable to the Swiss People’s Party. But the memory of Finland’s recent conflict with Russia means the Finns Party’s rapprochement with EU positions is less costly in political capital.

Then there is the new variable of the sympathy for Ukrainians generated by the Russian invasion. Although populist radical right parties are usually depicted as outsiders by the media, they are often well-rooted in their respective political systems and have served in governments. For the roots of these parties’ nationalist platforms, Ukrainian refugees as Europeans from a mostly-Christian country makes a change of policy easier to sell to party members and sympathizers.

Radical right leaders are not extremist mavericks unable to read political events. Their willingness to set aside their unashamedly anti-refugee stance — avoiding a waste of political capital by resisting the tide of sympathy for Ukraine — is testimony to their ability to read the room and quickly adapt in the face of shifts in public opinion. As Salvini inadvertently demonstrated, they do so even at the occasional risk of being called out for past actions and statements.

The Ukraine Invasion has shown that adaptability and flexibility are strengths for populist parties on the European radical right. Their opponents should not underestimate that.