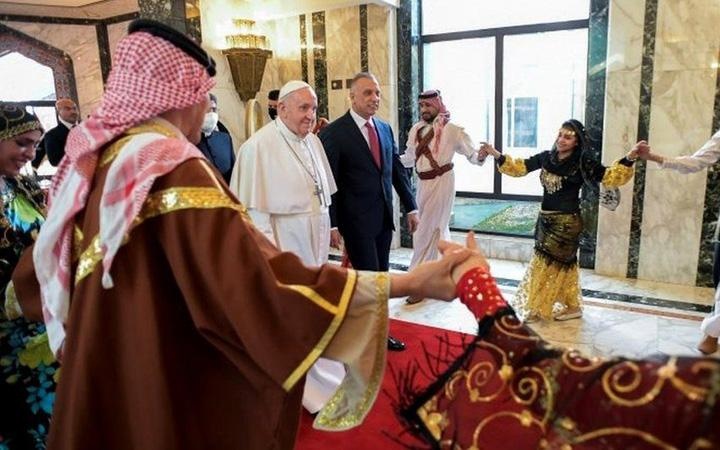 Pope Francis is on a historic four-day visit to Iraq to boost Iraqi Christians and to call for peace and dialogue between the country’s communities.

The Pope visited Baghdad’s Our Lady of Salvation Church, attacked by the Islamic State in 2010, after meeting with President Barham Salih and Prime Minister Mustafa al-Khadimi. Saturday’s itinerary includes a discussion with Iraq’s senior Shia Muslim cleric Grand Ayatollah Ali al-Sistani in Najaf, and a trip to the ancient city of Ur, the “cradle of civilization” and birthplace of Abraham, in southern Iraq. Later, he will visit the north of the country, including Mosul, Erbil, and the Assyrian city of Qaraqosh in Nineveh Province.

The visit has been celebrated by most Iraqi communities, particularly Christians, long subjected to persecution. Commenting on the importance of the Pope’s visit to Mosul and Nineveh — once home to multiple religions and ethnicities — Rasha al-Aqeedi, a Mosul native and a senior analyst at Newlines Institute, told EA WorldView:

This is beyond symbolic. For once, it will help free the city from its associating with ISIS while handing the extremist terrorist group a final blow. The most important figure in the Catholic Church will pray at a Church that was forced to close under ISIS rule only five years ago.

She adds, however, that media have not paid attention to the significance in “a bittersweet reminder that Mosul remains irrelevant or at least lowest on the priorities of Iraqis”.

In contrast, Iran-backed groups have not been as welcoming. There has been fierce criticism of the visit on their media channels, casting doubts around its primary purpose, and placing it within a grand conspiracy narrative about normalizing relations with Israel.

Beyond this binary of the overwhelmingly positive response and the sceptically negative, Iraqis on social media offer a more complicated picture with a conflict of emotions.

In the weeks leading up to the Pontiff’s visit, many Iraqis sarcastically said they wished that the Pope would come every month to push the government to provide better services. They noted that ministries, having neglected their demands for years, were quickly sprucing up main roads and streets in Baghdad and elsewhere.

On the day of the Pope’s arrival, scenes from the official welcome ceremony captured Iraqi hearts and minds, across backgrounds. Many people wrote that they could not hold their tears, watching traditional folklore performances reflective of a rich and diverse Iraqi heritage that has eroded in recent years.

“Let the world know that Iraq is not a country of wars and fighting only…[The performances] are a beautiful face for Iraq that Iraqis themselves have missed,” tweeted a young Iraqi woman from Baghdad. Songs, dances, and clothing, with both male and female artists, painted a picture of a heterogeneous, prosperous, and civil Iraq far away from the experiences in the country since 2003.

Iraqis in the diaspora around the world shared similar sentiments. “We are people who love life, but they have killed our souls, and destroyed our beautiful Iraqi identity,” tweeted an Australia-based Iraqi. Writing from the UK, ‘Aya explained:

The Paradox of Celebration and Corruption

On the one hand, Iraqis felt a sense of pride that their diverse heritage was being recognized internationally in a spotlight of unusually positive media coverage, long hidden under news of violence and radical groups. On the other hand, they knew that these images were constructed on TV by – ironically – the same political class that has contributed to the corrosion of Iraq’s heterogeneity, painting the country in one color and imposing a single identity.

The constructed images were a stark contrast with the harsh reality for Iraqis beyond the Presidential palaces. A group of Iraqi children from the south summed up the contrast in a video chant sent to Pope Francis: “Welcome baba [the Arabic word for Pope], our homeland has turned into ruins.”

Many Iraqis could not tolerate the idea that the Pope is meeting with the same political leaders who orchestrated their misery. An activist from Basra tweeted:

I have two emotions. I am happy that the world will recognise Iraq’s history. I am happy for the Christians. However, the Pope’s meeting with the ruling class will only consolidate their power. We want the Pope to be with the people, not with the politicians.

Noora al-Qaisi, an expatriate Iraqi journalist, wondered if the Pope could ask Rayan al-Kildani, a notorious Christian militia leader, about his role in confiscating Christians’ houses. Or might the Pontiff enquire of officials why the youth of Nassiriya were killed?

“It is painful to see the Pope shaking hand with [former Prime Minister] Adul Abdul Mahdi,” al-Qaisi wrote, citing the violent crackdown on Iraqi protestors during his Premiership.

Iraqi activists have seized upon the Pope’s presence in the country as an opportunity to raise their voices and send a message to the world about their struggle and the repression which they are facing.

While they long for peace and coexistence, the schism with the ruling class has been deepening. One activist wrote, “Despite the importance of the Pope’s visit, which we welcome as Iraqis, the situation won’t get any better simply because those who have ruled us post-2003 do not believe in coexistence and are a reason for the displacement of Iraqis of different ethnicities and religions.”

The Pope’s call for an end to violence, peace and coexistence — echoed by the Shia leader Grand Ayatollah Sistani — is necessary, but it remains insufficient on the ground. Peace faces the chaos of arms. Beyond the Islamic State, militias have entrenched their networks of power and dominance across the country. Assassinations and intimidation of activists are on the rise, as are rocket attacks on military bases and other locations under the pretext of pushing coalition forces out of Iraq. In Mosul and other areas in the north, demographic change has been carried out by Iran-backed armed groups.

But the militias are not the disruption of the post-2003 status quo. Instead, they are a symptom of it. So Iraqis ask, including on social media, “How can we trust the same leaders who have enabled such a mess to be sincere about bringing about change?”

They await the translation of words into acts. It is a translation that might recognize past blunders, seek present accountability, and, more importantly, a future justice for all Iraqi communities.