“This is Not America”: Race and Protest in Europe 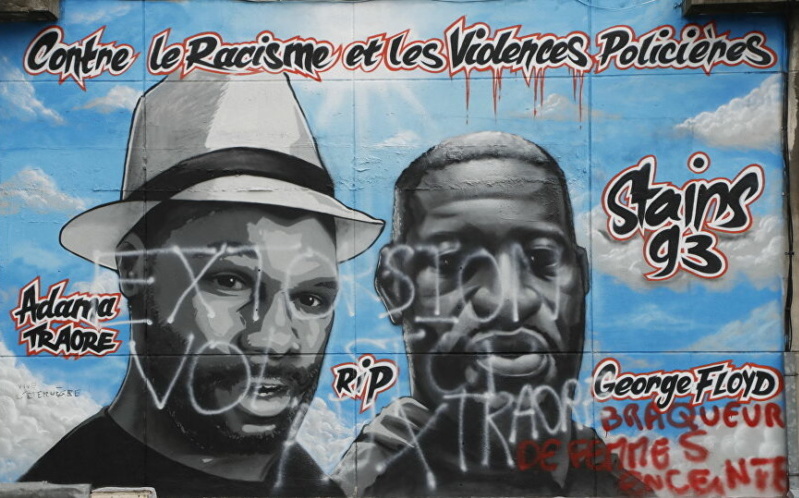 A mural defaced with racist messages in Seine-Saint-Denis near Paris: it depicts Adama Traore, who died in police custody in Paris in 2016, and George Floyd, murdered at the hands of police in Minneapolis on May 25

“This is not America”: it’s a go-to mantra for those who claim a European exceptionalism in matters of racism.

Such statements of moral superiority have been commonplace among European political and policy elites as they respond to protests following the murder of George Floyd in the US. They lay down an irreducible distance between European and American experiences of and responses to racism.

The problem with this European disavowal of “American” racism? It displaces recognition of local issues of race and the roles they play in the making of national identities in Europe.

Anti-racist activism in Europe must bridge this symbolic gap. It must call out European exceptionalism and critically illuminate the forms of racial violence and exclusion that underpin the making of European identities.

The protests across Europe have mutated to trigger activism and debate on police violence, racial profiling, the detention of asylum seekers, the removal of monuments, and much else. The range and intersectionality of the causes reflect the multiple ways in which race is at the heart of so many socio-political issues in Europe.

Yet, race and racism are rarely addressed directly in many European countries, where disavowal is the norm. Across the continent, racism is often framed as cultural or religious difference, thereby displacing the primacy of race and yet perpetuating “color-blind racism”.

As French intellectual Étienne Balibar wryly remarks, the “idea of a ‘racism without race’ is not as revolutionary as one might imagine.”