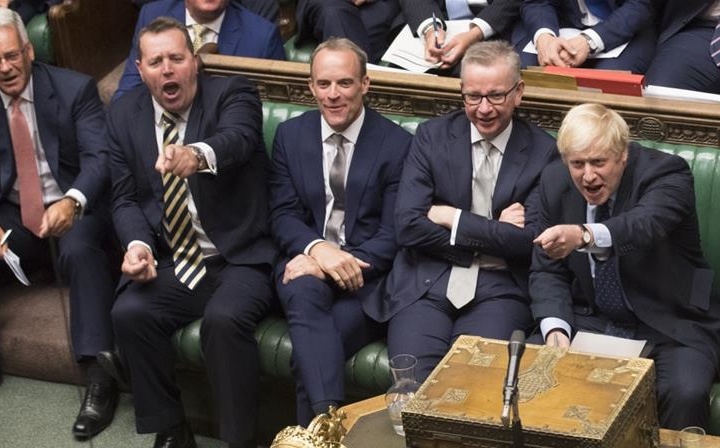 UK Prime Minister Boris Johnson (R) taunts the opposition — but it was he who suffered defeat in House of Commons, September 3, 2019 (Jessica Taylor/EPA)

Boris Johnson, the UK Prime Minister, has confirmed that he will call a vote on holding a general election if MPs legislate to block a No Deal Brexit. His pledge came after he lost a key vote to the so-called rebel alliance of MPs, which included numerous members of his own party. MPs voted 328 to 301 to take control of the parliamentary schedule to vote on their own bill that would force him to seek a Brexit extension from the European Union.

In the current circumstances surrounding Brexit, the business of prediction is becoming hazardous. The reliable features of political analysis – conventions, rules and laws – are falling away like a crumbling temple around its worshipers. This makes the prediction of elections harder than usual – and even the certainties of politics doubtful in the longer term.

The British constitution – the very edifice which Brexit was supposed to restore, and to which Conservatives are more committed than other parties – was, itself, the subject of a very fractious debate in the Commons ahead of the vote. On all sides the accusation was of “irregular”, “unconstitutional”, and even “dictatorial” behaviour.

All Eyes on the Rebel Alliance

After winning the right to control the parliamentary timetable, MPs will now vote on the bill put forward by the “Rebel Alliance” to block No Deal. We’ve heard what the immediate consequence of that will be – the government seeking an election. But it is still not guaranteed that it will get one.

The Labour Party has to vote in favor of the election under the Fixed-Term Parliaments Act for there to be enough support to make one happen. Jeremy Corbyn has insisted the party will only do so if the voting on the legislation over an extension is completed first. It looks likely this will occur but it will occupy much of the time up to the prorogation and therefore put off the election.

If an election does go ahead immediately, current polls suggest that the prime minister would have a good chance of gaining an overall Commons majority.

This will be easier if Nigel Farage confines his Brexit Party troops to barracks to give the Conservatives a free run. This is made more likely if the government continues its hardline position on leaving without a deal if necessary. The opposition, meanwhile, will split the anti-no deal vote and struggle to secure enough votes for a majority.

A Lost Majority and a Changing Party

As well as further undercutting Johnson’s majority, this represents a fundamental shift in British political culture. The major parties are traditionally broad churches. They have to embrace a variety of views in order to gain a majority of seats in the House of Commons under the UK electoral system. Parties have therefore usually punished disloyalty to the leadership by temporary rather than permanent exclusion (the current prime minister and leader of the opposition have both, in their time, benefited from this leniency). To insist on continuous universal discipline will create a different sort of party. It will be smaller, more ideological and less flexible than the UK is used to. The sort of governments produced by such parties will be different too.

With these forces at play, the UK is in line to get either an unprecedentedly unpopular and ideological government or a new administration formed by a combination of opponents of no deal. Neither of these is “business as usual” for the UK.

The alternative is that, under the Fixed Term Parliaments Act, Johnson’s minority government limps on, directed by a Commons which does not want it but which fears an election more. This too would be a novelty for a UK used to single-party five-year governments which command the House, and not necessarily a welcome one.

Where does this leave us? Successful prediction in horse-racing requires knowledge of horses’ and riders’ form, track, and conditions. The very rules of the race are now in question. The consequences of this toxic atmosphere will last longer than any single race, however exciting and unpredictable.