Can “Citizens UK” Bring Effective Social Change in the Community? 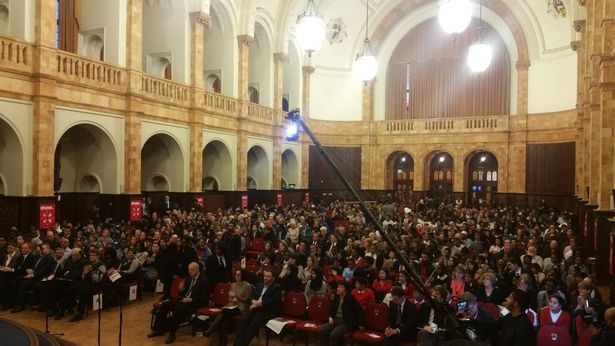 “The use of pledges in community organizing provide a different way of doing politics, a set of political tactics to build community power”

Dr Catherine Durose of the University of Birmingham writes for the Social Sciences Birmingham Forum:

Pioneering the use of pledges, Citizens UK encourages those with influence to commit publicly to action for the benefit of the community. These pledges are requested and answered within public assemblies, and are used by the organisation in local social justice campaigns.

With Birmingham hosting the Commonwealth Games in 2022, the city’s recent assembly brought a Citizens UK pledge from city council leader Ian Ward of guarantees to ensure community benefit. These guarantees focus attention on the once-in-a-lifetime opportunity offered by the Games as a catalyst for social change in the city.

Building on the example of the pledges that London Citizens secured in advance of the 2012 Olympics, Citizens UK: Birmingham called for a working relationship to deliver “a living wage games”. This will provide a legacy of opportunity for children and young people from across all communities in Birmingham, including paid work experience, access to sports facilities, and permanent affordable social housing.

Pledges as a Political Tactic

Pledges are a political tactic that contributes towards building a publicly-accountable relationship between citizens and those with formal power. These pledges are part of an ongoing political conversation between the electorate and the elected beyond the ballot box.

The public nature of the pledges is essential. They make it deliberately difficult for an elected leader to refuse commitment in front of hundreds of voters, in an event covered by the local media. When refusals do happen, they can provide a moment for honest dialogue, explaining the reasoning for the decision and offering a compromise or alternative.

The public aspect is part of a political strategy for both an “insider” influencing position and an “outsider” campaigning role. Pledges in a well-attended public assembly exhibits popular “outsider” power, but also provides a basis for negotiating an “insider” position. At their core, the pledges are seeking a commitment to work with and build an ongoing relationship with Citizens UK.

In an earlier Birmingham assembly, Citizens UK sought a commitment from the then leader of Birmingham City Council to re-settle 50 Syrian refugees in the city. The leader agreed, but initial progress was slow. Citizens UK responded to this lack of progress using the “insider” route, but reverting to an “outsider” tactic. It organized a symbolic delegation of 50 leaders from member institutions to attend a Council meeting to re-state the pledge and push for a commitment for the 500 refugees to be settled. The Council agreed.

Community benefit does not only come from meeting the pledge being met, but from creating them. Citizens UK uses listening campaigns or one-to-one conversations between organizers, leaders, and members of institutions to ask members directly about the issues that are affecting their lives. This helps craft pledges but also encourages collective action.

Citizens’ testimonies in the listening campaign underpin each pledge by giving a personal narrative of the impact of the issue. Testimony is deliberately sought from the most under-represented voices, providing an important opportunity for the marginalized to be heard, as a powerful, inclusive tool to democratize political debate.

Pledges are a conscious intervention to deliver social change for community benefit. Allowing citizens to say what matters to them and placing it on the political agenda creates a focus for collective action, providing a public assertion of community power and holding those in authority to account.