Catalonia Interview: Why Catalan Independence is No Populist “Soufflé” 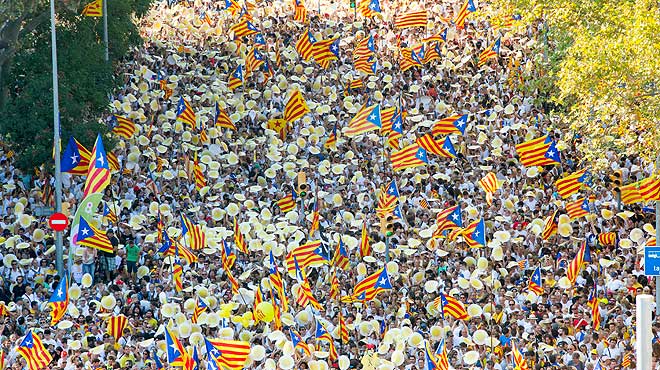 Klaus-Jürgen Nagel, Professor of Political Science at Barcelona’s Pompeu Fabra University, specializes in nationalism, federalism, and the comparative politics of nationalist parties and social movements. He speaks to EA WorldView’s Digital Media Editor, Ellis Palmer Babe, as part of our series on the Catalan independence movement and the nation’s relationship with Spain:

Tell us a little bit about yourself: where do you come from and how did you come to be a Professor of Political Science at Pompeu Fabra University?

Well, I come from Westphalia in Germany. My birthplace is only some kilometers away from the Dutch frontier. I studied Social Sciences and History at the universities of Münster and Bielefeld and got a PhD from the latter university.

I had worked two years at Bielefeld and five more at Frankfurt University, but these contracts were over when I read a call for a visiting position here at UPF, where I teach undergraduate and postgraduate classes in political theory and comparative politics. My publications and research projects all have to do either with nationalism or federalism or both.

How did Catalonia move from being a “regionalist” struggle to an independentist one?

Catalan nationalism is very old and stems –– as so many others — from the 19th century. However, it has often been termed “regionalist”, and the first party, founded in 1901, even called itself Lliga Regionalista. These movements and parties strove for a degree of autonomy, an official character for the Catalan language, and sometimes national recognition, but inside Spain — better said, they wanted a modernization of Spain.

Mainstream regionalist and federalist projects up to very recent times — I am talking about 2010 or even 2012 — did not include independence. This changed when a new statute of autonomy (that is, a Spanish basic law) that had been negotiated during 6 years and ratified by the Catalan people in an official and binding referendum finally failed before the Spanish Constitutional Court in 2010.

See also Catalonia Interview: “Young People Want to Break Away from a State Rooted in Dictatorship”

Tell us a little bit about the dynamics of nationalism in Catalonia.

Well, between the referendum on the new statute in 2006 and the sentence of the Constitutional Court in 2010, part of the electorate lost confidence in the success of the negotiating strategies of the nationalist parties. While the Court deliberated, and one leak after another appeared about which article of the statute would be invalidated in one or the other way, young activists started to move, asking for a referendum on independence, as they had the feeling that the parties — even those nationalist ones that had negotiated the statute — had failed and needed pressure from outside.

New platforms, inside and outside the parties, appeared. The Catalan National Assembly, founded only in the spring of 2012, managed to get more than a million people to the streets on the national holiday in 2012. Since then, and together with other associations, the ANC [Catalan National Assembly] has not stopped to mobilize, pressuring the parties to adopt more radical positions, and in the case of the then leading nationalist party, even to change its position from autonomism to independentism.

New parties appeared and new leaders took over the helm in the old ones, and the new generation of politicians is far less afraid of repression than those that still had in their mind the experiences of the Franco years or even the Civil War.

To what extent are the Catalan parties organised around traditional cleavages?

The two main historic nationalist parties now form a common independentist parliamentary group, the strongest force in parliament, and the base of the current minority government. This government is held up byan additional independentist party, the CUP, with an anti-capitalist and EU-critical stance.

Among the “unionists”, the main force now is the so-called Citizens , a state-wide force that had been founded in Catalonia to fight against the normalization laws that favor the Catalan language.

The Catalan Socialist Party, a branch of the Spanish PSOE with a leeway of acting autonomously, has lost its central position in the Catalan party system. It has competition not only from the Greens, a historic competitor, but also from the Catalan branch of Podemos and probably a new party in process of foundation that may be led by Barcelona mayor Ada Colau. These forces on the left of the Socialists, for the moment, act together. While they initially downplayed the importance of the national question, they are now under increasing pressure to define themselves more clearly.

How do the Barcelona and Madrid press perceive the Catalan situation differently?

Well, the Madrid press always distinguishes between “nationalists” and “constitutionalists”, the first term being reserved for minority movements, while there seems to be no Spanish nationalism.

Barcelona’s journals are more conscious of the fact that such a thing as Spanish nationalism also exists, and is also represented by mainstream parties, not only by lunatic fringes that adore to celebrate the Spanish national holiday on Oct 12th. But the leading Barcelona journals (La Vanguardia and El Periódico) are very far from taking an independentist stance.

Only journals with far minor number of readers (Ara, El Punt Avui) have a clear leaning towards independentist positions. You should also take into account that while the Madrid press (El País, El Mundo) is widely read in Barcelona, the Catalan press is not read in Madrid or in foreign countries. In TV, the quotas for the Catalan controlled broadcasts is even less important, and the Madrid-controlled public or private stations lead the Catalan audience by four times or higher. 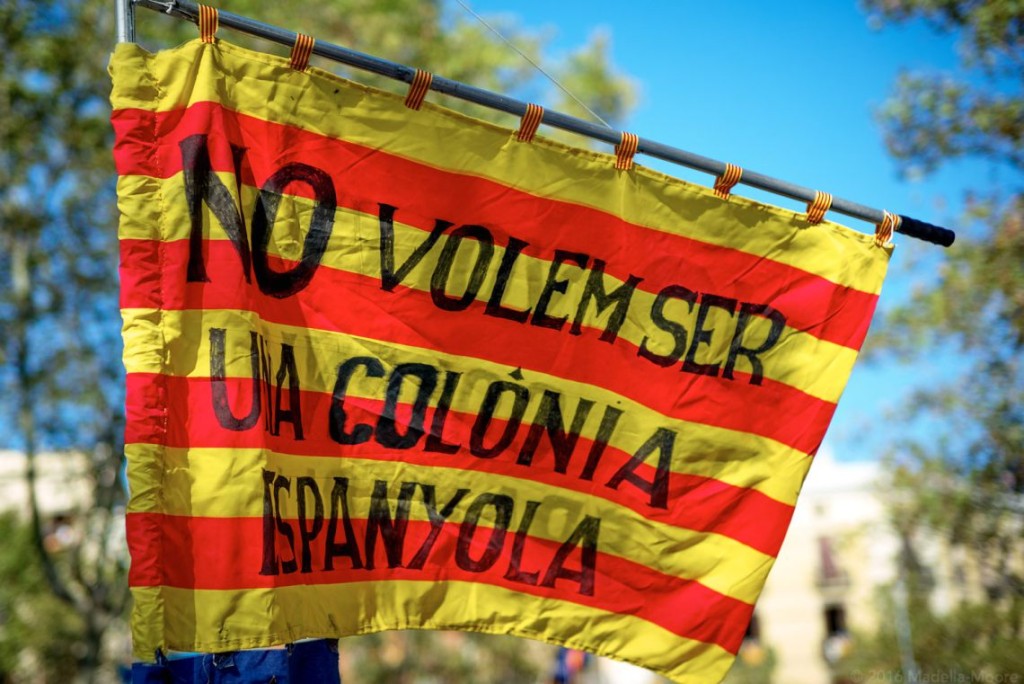 Assessing Politics and Society Within Catalonia

What is the situation with Catalonia’s social movements? How connected are they to Catalonia’s political parties?

If you mean independentist movements, they had their great moment in 2012 and afterwards, when they managed to drive the “old” parties — Convergence, the party that changed from autonomism to independentism; the Left republicans, who came out of a coalition experience with the socialists and the Greens) to adopt clearly independentist positions.

The Catalan National Assembly (ANC) together with Òmnium Cultural and others still may bring a million or more people to the streets; however, after the victory of the independentist parties in parliamentary elections, the dynamics of the movement and particularly of ANC has somewhat diminished and it may be that the arrows pointing who influences whom now have to be drawn vice versa.

Does the ANC now have a near-hegemonic position in Catalan society?

Well, I don’t know whether ANC ever was hegemonic in Catalan society, but it was surely hegemonic inside the independentist part of it. This is quite more contested now. By taking part in a common list for a yes on independence (Junts pel Sí — Together for the Yes), former leaders of the movement have been integrated into Parliamentary praxis and discipline, while the movement has problems in maintaining its independence from party political influence.

It stands to reason that a social movement organized around one topic – independence – but without the strong organization of a political party has difficulties to maintain its grip on such a broad part of the population when the details of the process towards independence are already the object of parliamentary debate, and when policy questions are tearing the commonalities apart.

It will be interesting to observe what happens to the movement if more pressure or even repression against the process is applied.

Tell us a little bit about your experience of the Diadas and other demonstrations. What is their significance?

Well, I am not Catalan, and my point of view never has ceased to be mainly the one of an academic. First of all, I would stress the absolutely peaceful and surprisingly massive character of participation. Even conservative estimates of more than a million that took to the streets in some of the marches means that a very significant share of Catalonia’s population (some 7.5 million) could be mobilized by the idea of a “right to decide” and even in some marches, by plain independence.

More surprising still is the capacity to repeat this mass participation over the years since, despite possibly divisive challenges in the course of the crisis and arguments on how to fight it.

While this may not go on forever, it is by now fairly clear that Catalan independentism is no “soufflé” blown up by populist rhetoric and/or party politicians, as we have so often read in the Madrid and foreign press, and that it [is a myth that it] may fall down again in a moment, when someone lets the air out of it.

How do you see the Catalan situation playing out?

Academics shy away from prophecies because so many have failed. We still have no crystal ball to show what the future will bring us. I may be pretty sure that Catalonia will not be a recognized as an independent state in one year and a half, but afterwards, who knows?

If we continue to live in a Europe where freedom and democracy are hold up as values, it will be increasingly difficult to prevent the Catalans to vote on the issue of their independence in the name of frontiers created by the marriage of the Catholic kings or the victory in the war of Spanish succession — not even in the name of a Constitution that only recognizes one Nation and proclaims its indivisibility.

If a social majority is maintained peacefully against all odds from Spain and from its allies, the road map of a disconnection from Spain that the current parliamentary majority in Catalonia proposes may in the end become true. However, the social majority has not only to be won, it has also to be maintained.

That is, of course, the main problem for the movement. It would probably not disappear again – there can be no return to a “default setting”, say to the situation of 2003, when the whole issue of s statute reform started.

A “please try again with a new statute of autonomy” or a federal reform is easier to proclaim than to realize as it would need an overwhelming majority in Spain and it does not take into account the changes in the Catalan party system and the coming to age of a new generation of politicians that are now governing the country.

A agreed solution would surely need the inclusion of some sort of referendum now, and I cannot imagine any Spanish government to concede this against the probably concentrated fire of all political competitors with the only possible exception of Podemos. This will not work.

However, the Spanish governments, even the feeble ones, have magnificent weapons at hand either to try to divide the independentists or to calibrate an increased repression by administrative, financial, and juridical means, very probably stopping short before using violence, while including the threat to take away the statute of autonomy.