Russia Daily: Why Are 1,000s Of Chechens Seeking Asylum In Berlin? 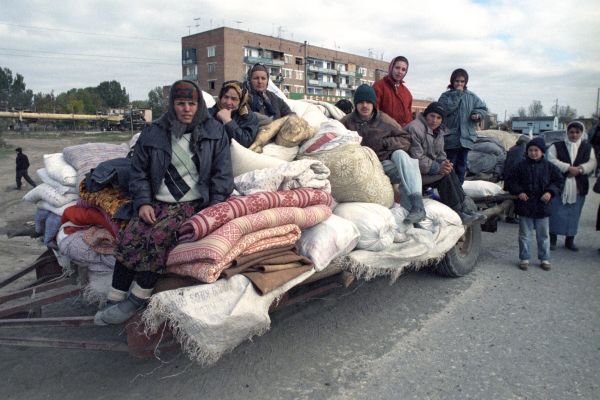 Anna Roze, RG’s Berlin correspondent, writes of a mass influx of migrants with Russian nationality — mostly from Chechnya — to Germany, and tries to explain the phenomenon.

Yet beyond the recent release by German authorities of migration statistics for 2013, the flood of Chechen migrants to Germany is not a new story.

So what does RG have in the way of new information, and why is the Russian state-owned paper printing this story now?

According to Germany’s Interior Ministry, statistics for 2013 show that 15,473 Russians filed applications for asylum. About 90% of applicants self-reported that they came from Chechnya.

However, only a tiny fraction — less than 2% — of applications are approved. The unsuccessful asylum seekers are threatened with deportation back to Russia via Poland.

The Office for Migration and Refugees told RG that it could not identify any single reason for “the sharp increase of applications from Russia can not be identified”.

RG notes that things are not worse in Chechnya than recent years, but then adds that a leading factor in the number of Chechen refugees flooding into Germany — according to the German authorities — could be “concern for the deterioration of the situation in the country as a result of the upcoming Olympic Games in Sochi. In choosing Germany as a country of destination, such factors as poverty and the desire to improve their standard of living due to high social benefits, may play a role”.

The broader story is that the question of to what extent Chechens are fleeing the Chechen Republic to apply for asylum in the West, particularly Germany, has become a highly politicized issue — hence RG’s repetition of a story covered peridically since last September.

Yet, even as RG emphasizes the issue again, the Chechen Government is officially denying media reports and German Government statements that 10,000 ethnic Chechens have applied for asylum.

Meanwhile, human rights NGOs who work with Chechen migrants say the exodus is because of a “feudal regime”, run by Ramzan Kadyrov, that prevents freedom of speech, .

As EA reported in November:

In a July blog post on the website Kavkazskiy Uzel, Svetlana Gannushkina, the head of the NGO Grazhdanskoe Sodeystvie, which assist refugees, said that the number of Chechens seeking asylum in Germany had “grown exponentially” during the first half of 2013.

“The ongoing abductions, the killings that are not investigated, the fear that is prevalent now in Chechnya, is depressing, enveloping a person to such an extent that it becomes a part of his personality,” Gannushkina said.

“The circumstances are terrible, there is no freedom of speech, people are afraid to talk…there is rampant cruelty, Russian law is absolutely not working, there is no place to turn — and all of this takes place because the Chechen authorities have given absolute carte blanche for any violation of human rights under the formula: “Russia is the Mother, and Putin is the Father of Chechnya,” she added.

So what does RG suggest could be some of the reasons why Chechens are flocking to Germany?

The story refers to (but does not link to) a November report by Deutsche Welle.

Attorney Bernward Ostrop, who provides legal assistance to Chechen asylum seekers in Germany, noted that there are “extensive networks” of human traffickers operating in Europe, who charge Chechen refugees several thousand dollars to get to Europe. Many only reach Poland, where they first submit an application for asylum, and are then sent to Germany.

What RG does not include from that DW report, however, is this comment by Ostrop on the reasons why Chechens are making asylum claims:

There are many reasons. Many talk about the torture to which they have been subjected. Mostly, we’re talking about people who themselves have not been politically active, but by circumstances — that their relatives are militants, or acquaintances of their acquaintances — they wound up being interrogated. At the same time, my clients often say that they had been tortured by the Chechen law enforcement.

When RG does mention allegations of torture by Chechen asylum seekers, these are suggested to be false:

As one of the judges of the criminal court of Berlin told RG, often Chechens come to Germany with false documents attesting to the alleged persecution by Wahhabis or security forces….

These documents are clearly sold for big money to increase the possibility of obtaining political asylum. In general, the incoming Chechens have no knowledge that an important criterion for granting political asylum is proof of danger to life when returning home, and believe that it is enough just to enter the country to stay there forever and get a “mountain of gold”.

RG also manages to find a source — the chairman of the German-Caucasian Society, Ekkerharda Maas — who says that Chechens are coming to Germany because of rumors that they will be greeted with rewards. Maas told RG “of the widespread rumors in the country that Germany is allegedly ready to take 40,000 people from the Chechen Republic and allocates huge ‘golden handshakes’ to visitors, as well as land.”

RG cites Die Welt, likely taking the reference from a RFE/RL report from September. In that article, Hans-Georg Maassen, head of the State Office for the Protection of the Constitution (Bundesamt fuer Verfassungsschutz, the domestic intelligence service), says around 200 supporters of the Caucasus Emirate who are resident in Germany are under surveillance.

So why is RG running a scare story now, mainly using reports from Die Welt, RFE/RL, and DW from September and November last year?

The answer could be a desire — ahead of the Sochi Olympics, and as Russia struggles with homeland security — to present a domestic audience with scare stories about the dangers posed Chechen “Islamists”, including those supportive of the Caucasus Emirate. The picture painted by RG suggests that this problem is not just faced or indeed recognized by Russia, but that the “Chechen threat” is also a danger for Western Europe, as thousands of Chechens “storm” Berlin.