Syria Spotlight: Why An Activist in Besieged Moadimiya is On Hunger Strike 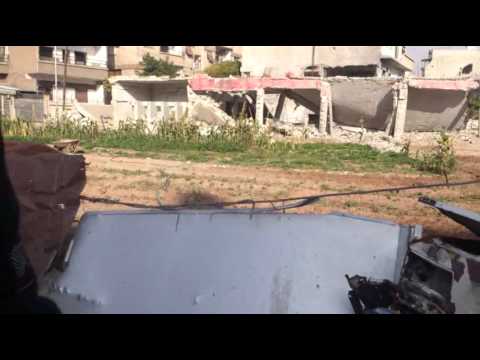 On Tuesday, the website “Hunger Strike Under Siege: Moadimiya, Syria” was launched with this announcement:

I am a 28-year-old Palestinian Syrian who serves the civilian Local Council of Moadamiya, Syria, protecting my family by using the pseudonym Qusai Zakarya.

The name was more than familiar to us at EA — Joanna Paraszczuk spoken with Zakarya on several occasions about the situation in the besieged Damascus suburb, including in October, “We Don’t Know How We Will Survive“:

We think if Bashar’s forces enter here, then they will not leave anyone alive. It’s like the whole world is taking pleasure in watching us die. Why? We just want freedom, just like you, just like the people in Europe and in America.

A week later, Zakarya told EA about the first of the Syrian regime’s evacuation of civilians from Moadimayyat Ash Sham, with uncertainty about where the evacuees had been taken and fears that some had been detained and abused.

Earlier this month, in an interview with Syria Direct, Zakarya maintained the insistence that President Assad must step down:

Instead of taking him to The Hague, they are talking about taking him to Geneva [for a “peace” conference]. Inside of Syria, on the ground, we know that Bashar al-Assad is a war criminal. We will keep on fighting until we take him to international justice.

Now Zakarya has decided that he must go farther to publicize the situation in Moadimayyat Ash Sham:

Numerous humanitarian organizations have pleaded to no avail with the Assad regime to break the savage siege against civilians in cities throughout Syria, including Daraya, Yarmouk Camp, eastern Gouta, and Homs. Assad continues to use food and medicine as weapons of war.

I declare a hunger strike beginning on Tuesday, November 26, until the siege against the townsfolk of Moadamiya is lifted.

I call on people of conscience everywhere to pressure their governments to act to break Assad’s siege and let humanitarian agencies bring food and medicine into besieged areas.

Your support is my only weapon.

In his latest entry, posted on Thursday, Zakarya writes:

Today, I lost consciousness. I’ve survived many bombings but the last one that fell close to our house three weeks ago

sent me flying against the wall. I thought I was ok but then I started to have severe back pain. Yesterday, the pain spread from my back down to my left leg. The pain is so bad that it overpowers the hunger.

I went to the doctor in our town. He said there’s nothing he can do to help me without the medical equipment he needs. Someone gave me four pills. Painkiller I think. I took them. I got dizzy and blacked out, probably because I took the pills on an empty stomach. I woke up a couple of hours later feeling lost and distraught. I can’t remember anything. I want to keep track of which media I spoke to but I can’t remember.

Human rights watch called me today. That I remember. I hope they will be able to help.

My head hurts. The world is spinning. I am lying on the floor and I cannot get up. I have asked my friend to write this post for me today.