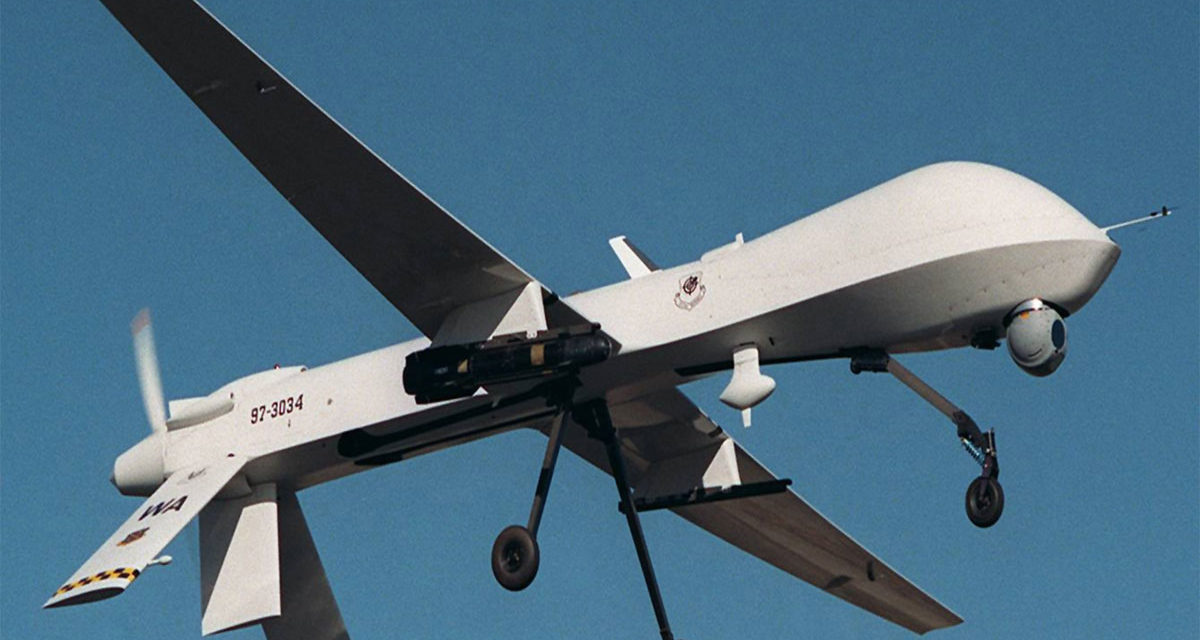 Tribal sources in Yemen said Tuesday that at least four suspected members of Al Qaeda in the Arabian Peninsula (AQAP) had been killed in a dawn drone strike in Marib Province, east of Sana’a.

Adsah Yemen cited local sources as saying that a drone shot six times at a Toyota Hilux car in which suspected AQAP members were traveling. The vehicle was destroyed and four occupants killed, the source said.

The source named two of the dead as Saleh al-Tays al-Waeli and Saleh Ali Qouti. Waeli was named by the Yemeni authorities this week as one of 25 AQAP suspects sought in connection with an alleged plot to launch a major attack before the end of Ramadan.

The newspaper also said that local people had been concerned about both U.S. drone strikes and the possibility of a terror attack by AQAP.

The reports of the drone strike come after Washington issued a warning on Friday, which led to the closure of Western embassies in Yemen and U.S. missions across the Middle East and Africa.

On Monday, the New York Times reported that the warning was prompted by intercepted communication between al Qaeda leader Ayman al-Zawahri and Nasser al-Wuhaishi, head of Yemen-based al Qaeda in the Arabian Peninsula (AQAP).

Previous drone strikes on AQAP targets were carried out by the US.

Car bombs targeting markets and shopping streets in and around Baghdad killed at least 35 people and wounded more than 90 on Tuesday.

Attacks have spiked since April, with more than 1000 people killed in July, the highest monthly death toll since June 2008.

On Tuesday, six car bombs went off in northern, eastern, and southern districts of Baghdad in quick succession. An attack on a central square by a parked car bomb killed five and wounded 18.

A Yemeni military helicopter has been shot down by a missile fired by tribesmen in central Yemen, killing a commander and seven other troops.

The helicopter, flying from the capital Sanaa to Marib Province, was part of a force guarding oil installations.

Al-Bajady, a businessman in the Qassam region, helped found the Saudi Civil and Political Rights Association (ACPRA) in 2009.

Al-Bajady was arrested for the second time in March 2011 after taking part in a protest outside the Ministry of Interior in Riyadh, demanding the release of long-term detainees ehld without trial.

The 36-year-old al-Bajady was arrested in March 2011 after taking part in a protest outside the Interior Ministry headquarters in Riyadh for the release of long-term detainees without trial. This was not the first time he was arrested. In September 2007 he was detained for 4 months without trial also for helping families of detainees to protest. He was released but re-arrested and tried in the Specialized Criminal Court that was originally established for the cases of alleged terrorists.

Bahrain: Human Rights Groups Urge US and UK to Reconsider Support for Government

Five Bahrain human rights organisations have sent an open letter to the British Prime Minister David Cameron and US President Barack Obama urging them to reconsider their support for the government ahead of mass demonstrations planned for 14 August.

The letter urged international human rights organisations, who have struggled to gain access to Bahrain due to government restrictions, to visit the country “as witnesses and in solidarity with those fighting for justice, human rights, and democracy.”

Finally, it called upon the United Nations to “to be proactive and to reiterate the rights of Bahrainis to free speech, freedom of assembly, the right to adequate medical care, and to pressure the authorities to refrain from using force, particularly tear gas and birdshot, ahead of August 14.”

Around 170 supporters of ousted president Mohamed Morsi have gone on hunger strike at Al-Ghorbanyat prison in Borg Al-Arab near Alexandria.

The move follows the announcement on Saturday that 179 pro-Morsi supporters, detained in the wake of recent protests and clashes between demonstrators and security forces, had gone on hunger strike in Cairo.

The leader of the opposition Republican People’s Party (CHP), Kemal Kılıçdaroğlu, declared the sentences in the Ergenekon coup trial “illegitimate.”

Kılıçdaroğlu criticised the court, stating “The rulings of the specially authorized courts are not legitimate from a legal, political or moral point of view. The rulings handed down by these courts are illegitimate.”

“In democracies, individuals are not tried in special courts linked to the political authority but in normal, independent courts which believe in the rule of law,” Kılıçdaroğlu said.

“These courts don’t distribute justice. Because they are courts under the instruction of the political authority and intend to fulfil their orders. The notion of rule of law is not valid for these courts,” he added.

The leader of Turkey’s second opposition party Nationalist Movement Party (MHP), Devlet Bahçeli, said that the court’s ruling “made the national conscience bleed and were incompatible with legal principles.”

He added, “It is clear that this [verdict] is the result of politicized justice. If injustice is not removed and objectivity not ensured, Turkey’s social and political structure will not be rescued from chaos and deadlock.”

In contrast, Deputy Prime Minister Bülent Arınç defended the court’s decision and accused its critics of being “emotional.”

Arınç stated “Nobody has the privilege of commiting crimes. We are not people who are going to be happy about anybody’s arrest. But there is a court ruling and everyone should respect it. I consider the criticism from suspects and their relatives as emotional, rather.”

The Deputy Prime Minister also condemned Kılıçdaroğlu’s response to the verdict, saying “These words are over the line. No politician can accuse the courts with such harsh words.”

The deputy leader of the opposition Republican People’s Party (CHP), Mehmet Haberal, was released yesterday after completing a reduced sentence of four years and three months for his part in the Ergenekon coup case.

Referring to the journalist Mustafa Balbay and Ankara Chamber of Commerce chairman Sinan Aygün, Haberal commented “I’m very sad my friends are staying here…I would have liked to leave with all of our friends.”

For those who have been tried under these circumstances, the final say is the people’s say. And the people are never wrong and are never deceived,” Başbuğ said.

“Those who have always stood beside the righteous people, beside justice, have a clear conscience. I am one of those people,” the former army chief added.

The United States has ordered the departure of all non-emergency government personnel “due to the continued potential for terrorist attacks.”

The State Department also urged all other American citizens in Yemen to leave the country as the “security threat level… is extremely high.”