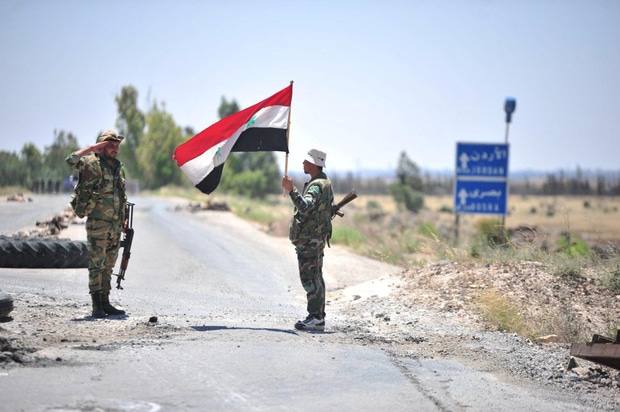 UPDATE 1230 GMT: The Syrian Network for Human Rights summarizes that 214 people have been killed and about 198,000 displaced by the pro-Assad attacks and Russian airstrikes across Daraa Province between June 15 and June 30.

The fatalities include 65 children and 43 women. Russian and pro-Assad forces have used 258 surface-to-surface rockets, 293 artillery shells, and at least 397 barrel bombs.

Israel has indicated its acceptance of the recapture of southern Syria by pro-Assad forces, including foreign militias and enabled by Russian airstrikes.

For weeks before the pro-Assad offensive began on June 19, Israel had warned that it might intervene if Hezbollah and/or Iranian-supported fighters were involved. After talks with the Israelis, Russia publicly called for “non-Syrian forces” to leave Daraa and Quneitra Provinces, near the Jordanian border and the Israeli-occupied Golan Heights.

In the past 13 days, the pro-Assad air and ground assault has reoccupied some towns and forced the surrender of others in both eastern and western Daraa Province. Photographs have indicated the presence of an Iranian-led Iraqi militia among the pro-Assad forces.

We will continue to defend our borders. We will extend humanitarian assistance to the extent of our abilities. We will not allow entry into our territory and we will demand that the 1974 Separation of Forces Agreement with the Syrian army be strictly upheld.

But Netanyahu’s statement was notable for its omissions. He made no reference to the precondition over non-Syrian forces. He offered no assistance to Syria’s rebels as they face capitulation, and he implicitly reinforced the Israeli military’s assurance that none of the 160,000 people displaced from Daraa Province will be allowed into Israeli-controlled territory.

Instead, the Prime Minister’s reference to the Separation of Forces agreement indicated that Israel’s priority will be the exclusion of any Assad regime forces from the demilitarized zone near the Golan Heights.

The Israeli army moved tanks and artillery cannons to the border of the zone on Sunday morning, and Defense Minister Avigdor Lieberman reportedly will ask Russia to enforce that Bashar al-Assad observes the limits on his personnel.

Unconfirmed claims in US and Israeli media said Israel is asking for a zone of 60 to 80 km (37 to 50 miles) from the border in which there will be no Iranian or Iranian-supported forces. However, there is no sign that the Assad regime will accept the condition and — given the violation of Daraa’s de-escalation zone by both the regime and Russia — that any line of exclusion will be observed.

During the pro-Assad offensive, the Israeli Government has focused on portraying its humanitarian assistance to the displaced, estimated at about 50,000, who have gathered on the Syrian side of the Golan Heights. Last week, the Israel Defense Forces announced it had delivered several tons of aid including food, clothes, and medicine to those in hastily-erected camps.

On Friday night, six injured Syrians, four of them children orphaned in Russian-regime attacks, were admitted to Israeli hospital.

But the IDF made clear over the weekend that it did not expect any attempt by the displaced to cross into the Israeli area of the Golan, reinforcing its position that the crossings will not be permitted.

Surrender talks resumed between rebels and Russian officials on Sunday, a day after rebels stepped out over the failure of terms on security if the Assad regime reoccupies opposition areas.

The talks, mediated by Jordan, were renewed in Busra al-Sham, a historic town on the Jordanian border.

Pro-Assad accounts put out unconfirmed claims of a local capitulation agreement for Busra al-Sham, held by the opposition since 2015, with rebels handing over heavy weapons.

Rebels had been seeking oversight by Russian military force, with no Assad regime military personnel or police, if they surrendered. After the collapse of talks on Saturday, Russia and the Assad regime resumed bombardment.