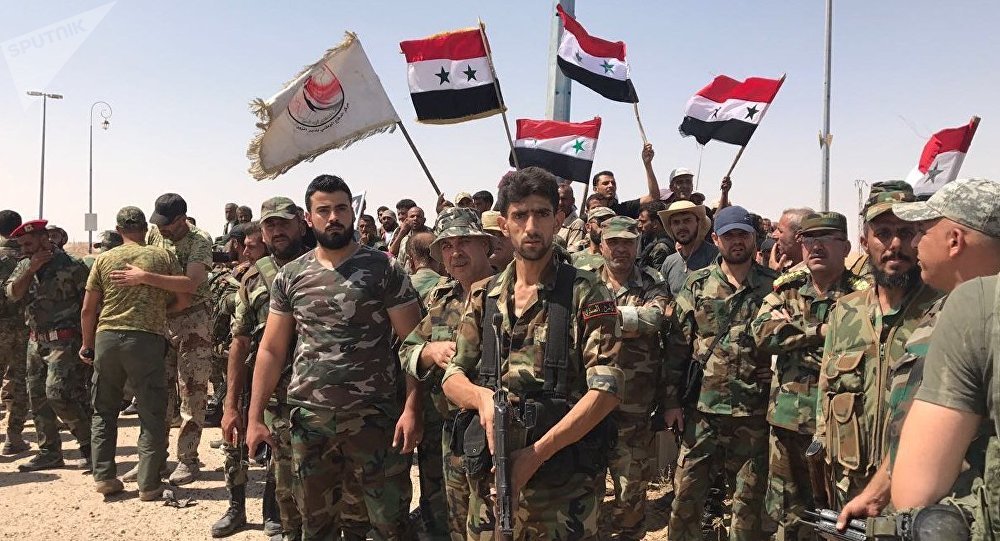 Pro-Assad and US-supported, Kurdish-led forces are converging on the Islamic State in eastern Syria in Deir ez-Zor city, one of ISIS’s last major positions in the country.

On Sunday, after a 50-km (31-mile) advance the Syrian Democratic Forces — headed by the Kurdish militia YPG — reached Deir ez-Zor’s industrial zone, a few miles east of the city, on the second day of their offensive.

The SDF said there were “intense clashes” on Monday in the Salhiya section, just north of Deir ez-Zor.

Meanwhile, the Assad regime’s military and allied foreign militias, which entered Deir ez-Zor Province at the start of September,

ISIS has faced the erosion of its presence in Syria throughout this year: in attacks by the SDF, supported by US airpower and artillery; by the pro-Assad forces, enabled by Russian airstrikes; and by US-backed rebels in the eastern desert. The Islamic State now holds only about 30% of Raqqa city, formerly its leading position in Syria, to the northwest of Deir ez-Zor, as the SDF slowly gains ground. ISIS has been all but ejected from Hama Province amid the pro-Assad offensive.

ISIS now has parts of Deir ez-Zor Province and about half the city, close to the Iraq border. Regime forces succeeded last week in reaching other units, surrounded in Deir ez-Zor military airport and city since 2014. About 93,000 people are estimated to remain in regime areas of the city.

With Sunday’s advances, the SDF and the pro-Assad forces are separated by about 15 km (10 miles) of ground and the Euphrates River. The two sides have not yet fought; however, throughout Syria’s 79-month conflict, there have been periodic clashes between Kurdish security forces and regime units in areas of the northeast such as Hasakah city, north of Deir ez-Zor.

A pro-Assad site, al-Masdar, talked up the possibility of confrontation on Monday with the headline “Race to Albukamal: Syrian Army planning to block US expansion”. It portrayed a showdown in the town of al-Bukamal, on the border with Iraq’s Anbar Province, as ISIS loses its other positions in Deir ez-Zor Province.

Earlier this month, US warplanes blocked a Hezbollah-regime attempt to move more than 600 ISIS fighters and family members from southwest Syria — following a Hezbollah and Lebanese Army offensive on both sides of the border — to al-Bukamal.

Prominent regime General Issam Zahreddine, who led the defense in and near Deir ez-Zor against the Islamic State, has told refugees that they should not come back to Bashar al-Assad’s Syria:

I am addressing everyone who left or fled from Syria to any other country: please (sarcastic) do not come back to Syria because [even] if the State forgives you, we promise that we will not forget and we will not forgive.

An advice from my chin: nobody returns to Syria.

Zahreddine’s statement reinforces Bashar al-Assad’s apparent exultation of ethnic and religious cleansing in Syria’s conflict, boasting to an audience of officials in late August of the “achievement” that Syrian socie­ty had become “healthi­er and more homogeneous”.

Rebels Confirm US Ultimatum to Withdraw from Eastern Syria

Rebels have confirmed their withdrawal from the Badia desert in eastern Syria after a US ultimatum, opening up the area to occupation by pro-Assad forces.

The Jaish Usoud al-Sharqiya faction and Ahmad al-Abdo Battalions said last week that they were cut off from assistance by the US and its allies, such as Jordan, in the Military Operations Command in Amman. The two groups were barred after they refused to agree a halt to operations against pro-Assad units and to concentrate exclusively on ISIS.

“There is a official request for us to leave the area,” said Badr al-Din al-Salamah, a senior official in Jaish Usoud al-Sharqiya.

Rebel commanders purportedly received a letter that said their presence now posed a threat to the pro-Assad units.

Western diplomatic sources said the request was tied to a decision by the Trump Administration to halt the CIA program, begun in 2013, to equip and train rebel groups.

The rebels had pushed ISIS out of more than 2,700 square km of territory between Damascus Province and the Iraqi and Jordanian borders.

In a meeting on Saturday, rebel commanders told the Military Operations Center in Jordan that they would rather “stay and die” in the desert than leave the battlefield.

“We have rejected the request, since if we entered Jordan we would consider it the end….The blood of our martyrs has not dried yet,” said al-Salameh.

Last week’s reports said Jaish Usoud al-Sharqiya moved toward the Tanf airbase near the Iraqi border, where the US is continuing to support Free Syrian groups against the Islamic State, while the Ahmed al-Abdo group pulled back into Jordan.

However, the rebels denied that they had been offered the choice to go to Tanf.

Diplomats said the US and Jordan are currently negotiating with Russia over a de-escalation zone that would push back pro-Assad foreign militias 40 km (25 miles) north of the Jordanian border.