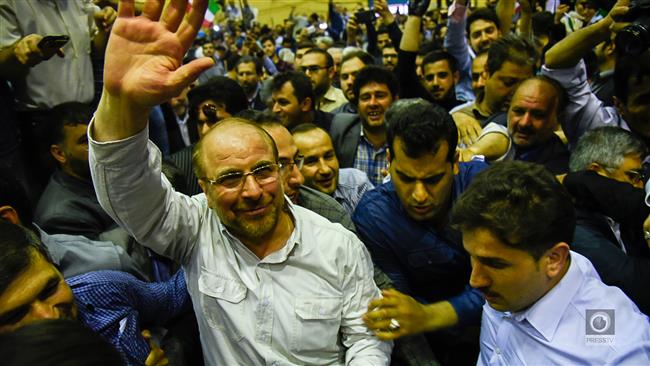 Jahangiri made the announcement to a rally in Shiraz in southern Iran.

Three days before Iran’s Presidential vote, conservatives and hardliners have made a dramatic move to block the re-election of Hassan Rouhani.

Tehran Mayor Mohammad Baqer Qalibaf, a conservative suddenly withdrew on Monday and announced his backing of the hardline cleric Ebrahim Raisi: “To realize this great ideal [of revolutionary unity], I ask all my popular supporters across the country to use all their potential and support for the success of our respectable brother, Hojatoleslam Ebrahim Raisi.”

Qalibaf has been running neck-and-neck with Raisi for second place behind Rouhani. The move indicated a consolidation to stop the President, who has been at 43% to 45% in polling, short of a first-round majority to avoid a runoff.

Raisi is the choice of the Supreme Leader’s office and the Revolutionary Guards. His chances had been dented by a lackluster campaign and his weak performances in the three televised debates, but supporters had taken place from a recent recovery in the polls, as well as a well-organized effort — bolstered the cleric’s leadership of the billion-dollar Astan Quds Razavi religious foundation — to mobilize voters.

In his withdrawal statement, Qalibaf continued his accusations of economic mismanagement by Rouhani. He also implicitly referred to the President’s harsh criticisms of him — these included allegations of corruptions and claims of a secret file highlighting Qalibaf’s role, as head of Tehran police, in the violent repression of protests in 1999,

“The day I decided to enter the election despite my personal interests, I was aware that I would face difficult and dangerous conditions,” Qalibaf said.

He declared that any fundamental change required a fight against the “4%” affluent minority linked to the Government:

The fight against pseudo-revolutionary opportunists has become highly costly, because thiscurrent is gnawing at the roots of the Revolution like a termite….[They] are not only at odds with the intellectual fundaments of original revolutionaries, but also represent a current whose material interests are at risk.

He continued, “Right now, the main goal of the country and the people is to change the status quo, and to that end, there is no other way than beginning a genuine fight free of slogans against aristocracy and opportunism in order to find a precise and comprehensive solution to the country’s problems.”

Tehran Mayor Mohammad Baqer Qalibaf among supporters in Rasht in northern Iran, May 15, 2017

Iran has withdrawn from the UN agency UNESCO’s 2030 Agenda after the Supreme Leader’s objections as part of his intervention in the Presidential election.

President Rouhani’s senior advisor Mohammad Baqer Nobakht announced the withdrawal from the educational program in a press conference on Tuesday.

Speaking in a press conference, Nobakht said that the educational agenda set by the United Nations Educational, Scientific and Cultural Organization (UNESCO) is not binding for any of its signatory countries.

The Supreme Leader, as part of his injunction to Presidential candidates to avoid “reliance” on foreign powers, denounced the program in a speech on May 7: “Why should a so-called ‘International’ community — which is definitely infiltrated by the superpowers — have the right to make decisions for the nations of the world with various cultures?”

The speech was a pointed attack on the Rouhani Government, which has cooperated with UNESCO — including the President’s meetings with UNESCO head Irina Bukova — as part of its promotion of an international approach to Iranian education. Critics have objected to the influence of “Western” disciplines.

“The UNESCO 2030 Education Agenda and the like are not issues that the Islamic Republic of Iran could surrender and submit to,” Ayatollah Khamenei said.

Nobakht said Tuesday that the procedure to carry out the 2030 Agenda “was stopped after the Leader remarks and it will not be resumed until removal of some ambiguous parts and defining the details”.

He criticized “certain persons” for “manipulating” the issue of the agenda to “serve their own political purposes”.