UPDATE 1800 GMT: Russia, Turkey, and Iran have pledged to establish a full ceasefire in Syria, but opposition-rebel negotiators have expressed reservations over Tehran’s role as a monitor.

At the end of the two-day Astana talks, the three powers announced the creation of a “trilateral mechanism to observe and ensure full compliance with the ceasefire”.

Russia and Turkey brokered a ceasefire on December 30, but Hezbollah and pro-Assad forces continued offensives near Damascus, notably in the Wadi Barada area to the northwest.

Russia, Turkey, and Iran said today that opposition-rebel groups would take part in a new round of UN-led peace talks next month in Geneva.

But Osama Abu Zaid, the legal advisor to the Free Syrian Army, said opposition participation at Geneva depended on whether their demands were met.

“We presented a scheme for mechanisms to monitor and implement the ceasefire,” Abu Zeid said. “The Russians have promised to review [the demands] in a week and said they will make a decision with the Turkish side during their meeting in Astana after seven days.”

Opposition-rebel representatives also said the success of the talks depended on the “removal of all foreign [Iran-backed] militias” from Syria and the ability of Russia and Turkey to ensure that Iran abides by the agreement.

“This is a joint statement by three countries. We are not party to this agreement. It is an agreement between Russia, Iran and Turkey – they can sign any agreements they want to. But from our side, we said we had many reservations,” Abu Zeid said.

The trilateral statement said the Assad regime and opposition agreed to “jointly fight against ISIL [the Islamic State] and al-Nusra Front [the jihadists of Jabhat Fatah al-Sham], and to separate them from armed groups”.

However, opposition officials claimed they had not discussed which groups were to be excluded from the ceasefire.

Meanwhile, the head of the regime delegation, UN Ambassador Bashar al-Ja’afari, indicated that Damascus will not observe the truce.

Ja’afari said the Hezbollah-regime offensive, which began on December 22 and continued despite the ceasefire announced a week later, will be sustained to drive “terrorists” from Wadi Barada, which provides more than 60% of Damascus’s water.

“This is about freeing the main source of water,” said Jaafari. “As long as there are terrorists depriving 7 million people in the capital of water we will continue the operation.”

Pro-Assad attacks were reported on Tuesday near the al-Fija springs.

However, the opposition-rebel delegation expressed optimism that they had achieved their goal of beginning to move Russia, the essential ally of President Assad, away from the regime and its other major backer Iran.

Meeting in the Kazakhstan capital Astana, the regime and opposition-rebels faced each other across the table for opening statements in which each side called the other “terrorist”. They then spent the rest of the day negotiating indirectly.

“We noticed a real understanding on the part of the Russians,” Yahya al-Aridi, an opposition spokesman, told reporters. “We understand that militarily they have achieved what they wanted in Syria. Now they want to translate this military achievement into some sort of political deal. That has to be a ceasefire.”

Rebels said before the talks convened that they did not express the Assad regime to discuss even basic issues like a ceasefire. However, they hoped to use the failure to highlight regime obstinance and begin shifting international opinion. That in turn could shift Russia — which has worked with Turkey, a supporter of the Syrian opposition and rebels since 2011, to arrange the talks — to consider pressure on President Assad, who has ruled out any discussion of a transitional process.

Such a shift could also separate Russia from Iran, which has maintained that Assad’s future is a “red line” that cannot be crossed.

In contrast to a derisory tone towards the opposition-rebel bloc in past discussions, Russian State media is maintaining a neutral line today, referring simply to the “opposition” with no implications of illegitimacy or reference to “terrorists”.

Mohammad Alloush, the head of the opposition-rebel delegation, said in his opening statement that the group would only discuss a ceasefire, release of detainees, and end to sieges — thus testing Russian and regime adherence — before any consideration of political arrangements with the “terrorist entity” of the Assad regime.

At the same time, he made clear that “any political transition must start with removing Assad and “a bloody despotic regime” backed by “vengeful sectarian militias”, while expelling all the forces “affiliated with Iran from all Syrian lands”.

Alloush, a senior official of the rebel faction Jaish al-Islam, said that the opposition-rebel group will not meet directly with the Assad regime’s representatives, and that it does not consider Iran — in contrast to Russia and Turkey — as a guarantor of the agreement.

When Alloush lled for the release of 13,000 women from regime prisons and an end to “starvation sieges”, an argument followed that forced Kazakh officials to appeal for calm. several participants said.

The head of the regime delegation, UN Ambassador Bashar Ja’afari, used his statement to emphasize that “herds of Takfiri terrorists were gathered, trained, financed, armed, and brought across the borders with the neighboring countries”, according to Syrian State media.

He told journalists later that the opposition-rebels was a “terrorist group delegation”. He said Alloush’s statement was “insolent” and “provocative”, characterized by “a departure from tact and diplomacy”.

Ja’afari then effectively distanced the regime from the process, declaring that “this gathering was not organized by Syria” and saying the regime is not responsible for the arrangements, i.e., who was invited on the opposition-rebel side.

But the Syrian opposition and rebels saw hopeful signs throughout the day. They said that, for the first time, Russia had expressed concerns over pro-Assad attacks which defied a December 30 ceasefire announced by Moscow and Turkey.

Opposition-rebel representatives also said that Russia had acknowledged that the jihadists of Jabhat Fatah al-Sham are not present in Wadi Barada, northwest of Damascus, which has been under a month-long assault by Hezbollah and regime forces.

The Assad regime has used the pretext of the presence of JFS, which they say is excluded from the December 30 truce, to carry out bombing, shelling, and ground assaults on Wadi Barada, an area of 10 villages and between 50,000 and 100,000 people. 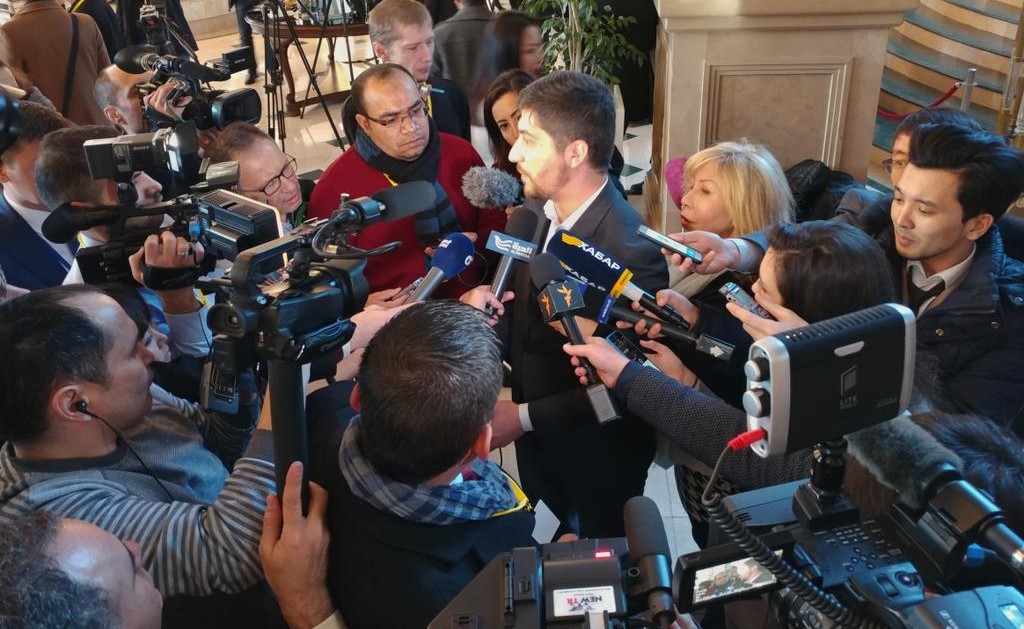 Diplomats said Russia, Turkey, and Iran are working on a final communique that may be completed as early as Tuesday. The text will reaffirm the nominal ceasefire.

The Russian State outlet TASS said a draft also promised that the three countries will commit to a joint fight against the Islamic State and Jabhat Fatah al-Sham.

US Denies Coordination of Airstrikes with Russia

The US has denied that it cooperated with Russia in airstrikes in northern Syria, in support of a Turkish-rebel offensive against the Islamic State.

Russia’s Defense Ministry asserted that the American military had provided coordinates for ISIS fighters near the town of al-Bab, the Islamic State’s last major position in Aleppo Province.

A Turkish-rebel offensive has struggled since early December to progress against ISIS resistance, including suicide bombs and improvised explosive devices.

After weeks of criticism from Ankara, the US finally carried out strikes in the area earlier this month.

The Russian Defense Ministry said on Monday that it was now involved, “As a result of this joint operation, a number of ammunition depots… as well as an area where militants had gathered with equipment, were destroyed.” The Ministry praised the “high efficiency of the joint actions aimed at the elimination of the international terrorist groups in Syria”.

Pentagon spokesman Eric Pahon responded, “The Department of Defense is not coordinating air strikes with the Russian military in Syria.”

Pahon said the Defense Department said the channel of communication with the Russian military is only focused on avoiding collisions in the airspace over Syria.

But later in the day, Trump Administration spokesman Sean Spicer indicated that cooperation might soon be pursued, “If there is a way that we can combat ISIS with any country, whether it is Russia or anyone else and we have a shared national interest in that, sure we’ll take it.”